Or perhaps that's old news, they became a couple months ago. They are not in a pub. They are at her kitchen table eating dinner with her parents. There is polite intergenerational conversation. They all agree that reinstating border controls will be bad for business. He has just gotten a job with a wholesale supplier, delivering animal feed to farms both sides of the border. Her mother asks about this, she approves. It's all quite pleasant but there are sideways glances between the young couple. She lives with her parents and he lives with his, this is limiting, as you can imagine. Their toes tap soundlessly inside their shoes.

As Brexit looms at the end of this month, this book looks at what life is actually like along the Irish border, the author walking and camping (and occasionally canoeing) along the entire disputed length of it. He goes from south-east to north-west, so starting with the bits I know best and taking me into less well charted territory; it's a lovely series of vignettes of the realities of the land, and the brutal history that goes along with it. There is a particularly memorable sequence in the middle that segues from Barry McGuigan as hero to Sean Quinn as villain. The section on the cave networks which are literally undermining the border between Cavan and Fermanagh is also pretty memorable. A good book to give to anyone who doesn't really understand the Ireland/Brexit relationship, and isn't all that interested in the politics. You can get it here. 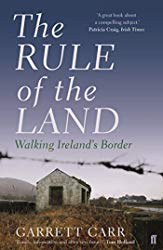