Amsel came out of the house, carrying a barrelful of scraps to be buried in his garden patch for mulch. He sat down on a weathered wooden bench and took a deep breath, watching it frost in the early-spring air. It was his habit to listen to the flowing water and the singing birds for a short time in the morning. Amsel was a small man, small and wiry, with a great explosion of white hair under a floppy hat, and a face that could claim any age from thirty to fifty. He was dressed in loose-fitting green and brown clothes, covered with pockets. In the pockets were all manner of things: a thong-bound parchment notebook, a quill pen which carried its own ink supply (Amsel’s own invention), a lodestone, a small hammer (for chipping off interesting rock specimens), a small net of tanselweb (for capturing interesting insect specimens), and a pair of spectacles (also Amsel’s invention). He believed in preparing for any eventuality.

I got a third of the way through this and decided I didn't care any more. It's a fantasy novel about various human kingdoms under threat from dragons and from each other, but it failed to excite me and so I'me leaving it be. If you want, you can get it here.

This was my top unread book acquired in 2016. Next on that pile is Hex by Thomas Olde Heuvelt. 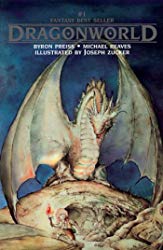