"Splendid!" Perveen clapped. Alice was just the remedy she needed for her dark mood.

First in a series of mystery novels set in 1920s Bombay, featuring a Parsi woman lawyer as the protagonist. I wasn't hugely impressed. The actual murder doesn't happen until almost half way into the book, and I was thoroughly unconvinced by both the investigation and the resolution. Our heroine is able to triumph partly due to rather improbable violations of procedure by the police. There's also an intrusive backstory about her brief marriage to a chap from Calcutta. (And at the end we are told that the murderer is being let off with a pretty light sentence, which is incomprehensible.)

The author has clearly done her research into Bombay of the period, and wears it very heavily. There's an awful lot of Hind-splaining to the reader - the phrase "as you know, Perveen" comes perilously close to being used more than once, and Mistry seems to be unaware that Urdu and Hindi are so close to each other than some linguists consider them the same language (and the divergence between them was even less in the 1920s than it is now).

So I finished it, but don't recommend it particularly. If you want to, you can get it here.

This was my top unread book by a writer of colour. Probably will go for The Idea of Justice, by Amartya Sen, next, but there are alternatives to hand as well. 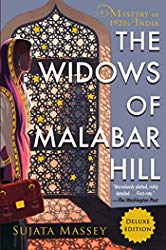