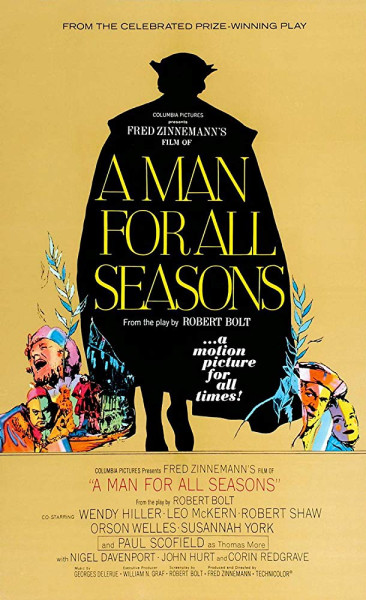 The other Best Picture nominees were Alfie, The Russians Are Coming, the Russians Are Coming, The Sand Pebbles and Who's Afraid of Virginia Woolf? - I have seen none of them. The IMDB rankings have A Man for All Seasons ranked 9th by one system and 20th by the other; the clear winner among IMDB voters, top of both lists, is The Good, the Bad and the Ugly. Other films ranked ahead of it on both systems are Persona, Blow Up, Andrei Rublev, Who's Afraid of Virginia Woolf?, Fahrenheit 451, The Battle of Algiers, and Manos: The Hands of Fate. The only one of those I have seen is The Good, the Bad and the Ugly, which is one of my favourite films (and did not get a single Oscar nomination). Other 1966 vintage films that I have seen include A Funny Thing Happened on the Way to the Forum, One Million Years BC, Carry On Screaming, and Daleks Invasion Earth 2015 AD. I will agree with IMDB voters that A Man for All Seasons is better than any of them except The Good, the Bad and the Ugly. Here's a trailer (post-Oscars):
I liked this a lot. It's the story of Sir Thomas More, author of Utopia, and Chancellor of England under Henry VIII. The King assumes power over the Church in order to facilitate his marriage with Anne Boleyn; More cannot approve, and is tried and executed. The script is witty and also moving, and a big story is told without a huge budget (at $2 million, $16 million in today's prices, less than any Oscar winner since Marty). I'm putting it in my top ten, at #7 as the list stands, below The Bridge on the River Kwai but above West Side Story.

I don't think there are any actors returning from previous Oscar-winning films. The closest is Wendy Hiller, who was Eliza in the 1938 Pygmalion I watched recently, and is Alice More here. 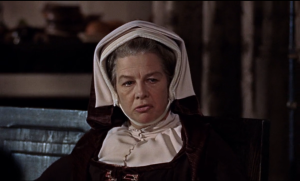 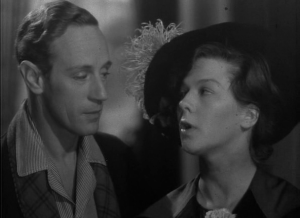 However, I also like to track crossovers with Doctor Who, and we have a pretty big one: Richard Rich, the bad guy who betrays More, is played by John Hurt, who played the War Doctor forty-seven years later. It's the only case of a TV Doctor with a speaking role in an Oscar-winning film (Patrick Troughton and Peter Cushing are both in Olivier's 1948 Hamlet, but Troughton doesn't speak and Cushing wasn't a TV Doctor). 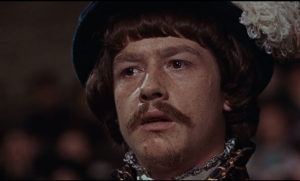 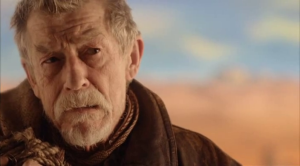 There are a few more. Cyril Luckham is Archbishop Cranmer here, and went on to play the White Guardian in Doctor Who: 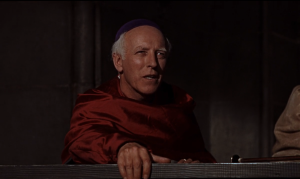 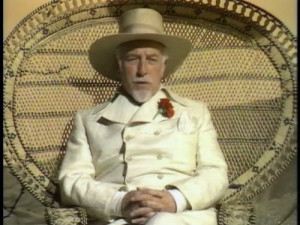 David Collings is a King's Messenger; he was in Doctor Who three times, in the Fourth Doctor stories Return of the Cybermen, heavily made up as the Vogan leader Vorus, and The Robots of Death, less heavily made up, as the homicidal Poul; and also heavily made up again as the title character of the Fifth Doctor story Mawdryn Undead. (He's also Blake's new sidekick in the very last episode of Blake's 7.) 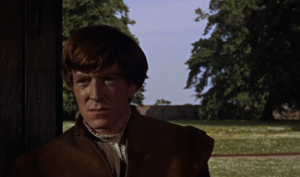 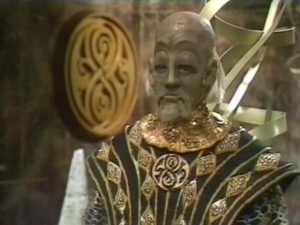 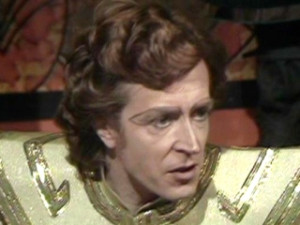 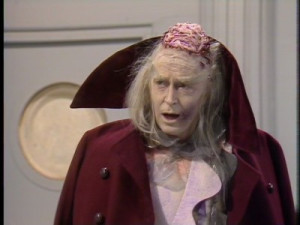 The Tower of London is full of Who; the jailer on the left is John Nettleton, who much later is the Reverend Ernest Matthews in the surreal Seventh Doctor story Ghost Light, and the Governor of the Tower is Martin Boddey, who plays the awful British civil servant Walker in the Third Doctor story The Sea Devils a couple of years later 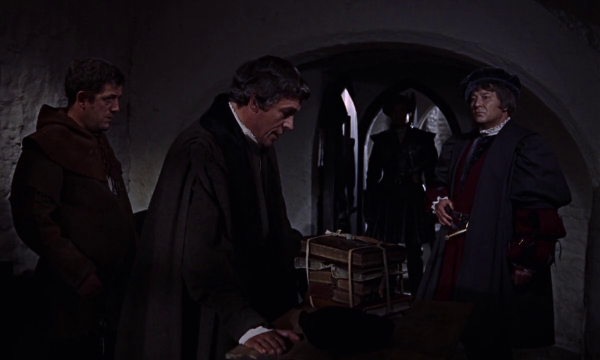 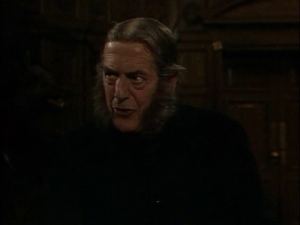 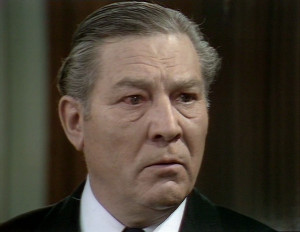 There are several others who I wasn't able to get a decent shot of from the film - Eric Mason is the executioner (but we don't see his face), Graham Leaman and Trevor Baxter are extras, and probably I have missed some. There are also a lot of actors who I know from 1970s and 1980s TV as well - most obviously Leo McKern as Cromwell, but also Nigel Davenport, Corin Redgrae, Colin Blakeley and not forgetting Orson Welles as Wolsey.

I'm going to acquit the film of my usual charge of whitewashing. Thanks to the work of Onyeka and Miranda Kaufmann, we now know that there were a lot of black people around in Tudor London; but in 1966 this was not common knowledge. (John Blanke was identified in an academic journal as a royal trumpeter for Henry VII and Henry VIII in 1960, but I can forgive the film-makers for not being regular readers of the Bulletin of the John Rylands Library.)

It's a rather male story (indeed, it's a rather Thomassy story - More, Cranmer, Norfolk and Cromwell all shared the same first name). But the two major women are both very well drawn and portrayed. I've mentioned Wendy Hiller above; I'm developing a real crush on my aunt's friend Susannah York; we saw her in Tom Jones a couple of years back, and here she is great again as More's daughter Margaret. 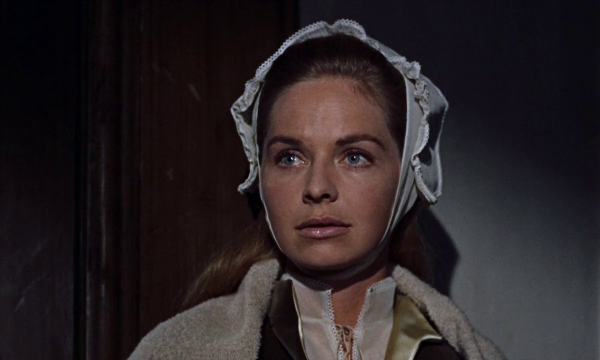 And let's not forget Yootha Joyce, later to achieve fame as Mildred of George and Mildred, who is the sinister petitioner Averil Machin. 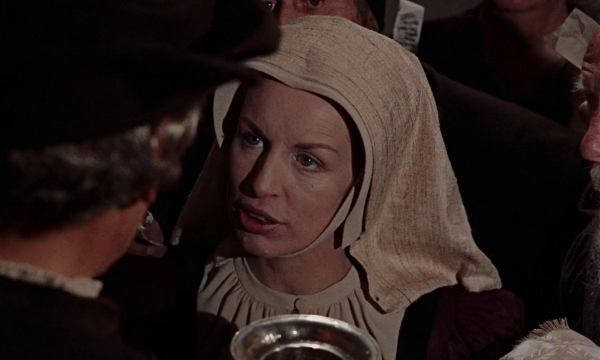 The film is dominated by Paul Scofield as More, fully deserving of his Oscar. I see that he did surprisingly few films for an actor of his stature. I do remember him from Quiz Show as the father of the dodgy contestant, but I had forgotten that he was also the French king in Branagh's Henry V. 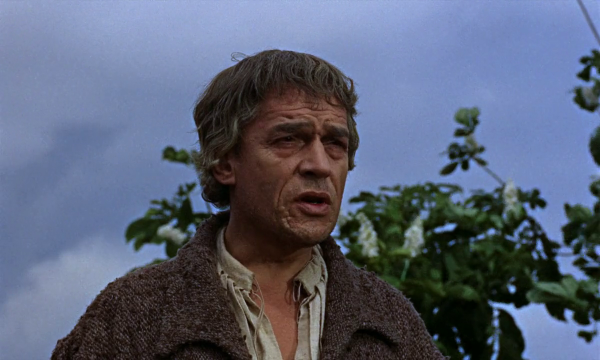 He gets most of the good lines here. And they are good and memorable lines, applicable to the present day as much as to 1530.

Roper: So, now you give the Devil the benefit of law!
More: Yes! What would you do? Cut a great road through the law to get after the Devil?
Roper: Yes, I'd cut down every law in England to do that!
Sir Thomas More: Oh? And when the last law was down, and the Devil turned 'round on you, where would you hide, Roper, the laws all being flat? This country is planted thick with laws, from coast to coast, Man's laws, not God's! And if you cut them down, and you're just the man to do it, do you really think you could stand upright in the winds that would blow then? Yes, I'd give the Devil benefit of law, for my own safety's sake!

Wolsey: You're a constant regret to me, Thomas. If you could just see facts flat-on, without that horrible moral squint... With a little common sense you could have made a statesman.

More: Why Richard, it profits a man nothing to give his soul for the whole world... but for Wales?

More is a very attractive heroic figure. I suspect that the story was tremendously influential on the parents of the people I used to hang around with at Fisher House as an undergraduate: telling the story of genteel resistance to the Reformation on a point of principle. A Man for All Seasons is far from the first theatrical treatment of the story - William Shakespeare contributed a scene to a 1590s script which was not performed until 1964. Here's the key speech, urging compassion for refugees, which has chilling resonances for today:
Much more recently, Jeremy Northam's portrayal of More in TV's The Tudors has generated a host of fanvids.
I should finish by noting the excellent cinematography of the film. As noted above, it was made on a virtual shoestring, and the various localtions do a lot of work, economically put together to make the visuals propely compliment the story. Georges Delerue's music doesn't quite rise to the level of being a star in its own right, but that's not necessarily a bad thing.
It's the third Oscar winner in five years to be set in Merrie Englande (after Tom Jones and My Fair Lady). Next up is In The Heat Of The Night, of which I know nothing at all. It's less than two hours long, so I'll hope to watch it on Eurostar next week. After that it's back to Merrie Englande with Oliver!.