Second paragraph of third chapter (and it's a long one, sorry):

The background to this logic is simple enough. There has long been a fear among French and U.S. strategists that without the monarchy, Morocco could slide into chaos or be taken over by elements that might not ensure continuity of Western interests. During the Cold War, left-wing nationalists were the threat. Now it is political Islam. The Moroccan monarchy has been more than willing to play up its alleged vulnerabilities—"apres moi, le deluge!"—to win over support. Although the popular Moroccan political imaginaire is not as limited as the West fears, the country's pivotal location at the mouth of the Mediterranean prioritizes stability over all other considerations. Considering the histories involved and the geopolitical context of the mid-1970s, it is clear that France and the United States were already predisposed to support Morocco's takeover of Spanish Sahara in 1975. Analyzing the intractability of the Western Sahara conflict, one group of scholars compare it with the equally deadlocked situation in Cyprus, where "mediation exercises tend to become embedded in broader geopolitical policies." In the case of Western Sahara, they note that "neither the United States nor France, the most important external powers in Maghrebi politics, has been prepared to make the fate of the Sahrawis the defining touchstone of its relations with Algeria and Morocco" (Crocker, Hampson, and Aall 2004, 33). Yet these authors do not go far enough. In this chapter, we show how the actions of the U.S. and French governments have profoundly determined the conflict's overall contours to such an extent, we believe, that one can hardly understand the past and present of Western Sahara without first incorporating this crucial dimension.

In my last job I did quite a lot of work on Western Sahara, advising the Frente POLISARIO on diplomatic strategy, and so this was a welcome return to one of the most fascinating dossiers I have worked on. In fact it takes the story only as far as 2008, so I particularly recall only the last couple of years here as I started working on it at the start of 2007.

Zunes and Mundy give a comprehensive account of how the Western Sahara conflict came to be. In a nutshell, Morocco elevated the annexation of the territory into a manifest destiny (which also incidentally includes the Spanish cities of Ceuta and Melilla, most of Mauretania and parts of Algeria). In the wake of a 1975 International Court of Justice ruling that Morocco (and Mauretania) had no serious claim to the territory, Spain none the less withdrew unilaterally, allowing Morocco and Mauretania to take over without a legal basis. The indigenous Saharawis had different ideas, and (with Algerian aid) defeated Mauretania and fought Morocco to a stalemate in 1991. The Moroccans have broken the promise to hold a delf-determination referendum, on which the ceasefire was based, and continue to colonise the coastal areas which they hold; meanwhile the Sahrawi Arab Democratic Republic (SADR) controls around 20% of Western Sahara's territory, is recognised dipomatically by dozens of states and has full membership of the African Union. It is the largest territory outside Antarctica whose sovereignty is in dispute.

Morocco, however, has a fait accompli in occupying most of the territory (especially the useful bits) and also the full backing of the United States and France. The Western Sahara issue is tied very closely to the survival of the Moroccan regime (which has failed to deliver for its people in most other areas), and the Great Powers do not want to risk chaos at the mouth of the Mediterranean. Moroccan propaganda has it that the whole thing  is cooked up by the Algerians; Zunes and Mundy demonstrate that the roots and substance of the Saharawi identity run much deeper, and that in any case continued support for the Saharawis is a strategic no-brainer for Algeria. It's a comprehensive account which also looks at the difficulties of finding a solution. You can get it here.

The depressing thing is that very little has changed in the meantime. Morocco's legal position with respect to the EU has been weakened by a ruling of the European Court of Justice, but the EU's own lawyers have been finding ways of wriggling around it. A brief moment of optimisim, weirdly enough, was President Trump's appointment of John Bolton as his National Security Adviser; Bolton had been chief of staff to James Baker when he was the UN's chief negotiator on the issue, and took a more nuanced and dynamic view of the situtation than was the American orthodoxy. However, Bolton's seventeen months in the Trump adminiistration were not exactly crowned with success. (My suspicion is that at present, US foreign policy on any place that the President hasn't heard of - in other words, most places - sits with Congress, which is thoroughly influenced by Morocco.)

This was the non-fiction book which had lingered longest unread on my shelves. Next on that pile is (gulp) The Critique of Pure Reason, by Immanuel Kant. 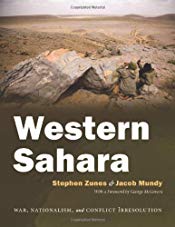