The other servants at Wherewithal House said, 'Don't be ridiculous, Mary. The girl is a beast, a frightful creature. She is spoiled and savage, the very worst combination possible.'

I wasn't really aware of the Iris Wildthyme books, another series that I obviously need to get to grips with for completeness, and picked this up at a book sale earlier in the year. It's the middle volume of a trilogy published in 2011, 2012 and 2013, and so I missed out on both the set-up and the conclusion. It's interesting enough that I will seek out the others; the concept is that Iris and her peculiar friends are trapped in a parallel universe while on our Earth fans and pro writers of her adventures are uneasily interacting with each other and with her story. You can get it here. 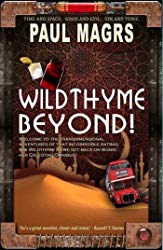