My biggest media appearances were the BBC election broadcasts for the three elections in Northern Ireland, with my long-term sparring partner Mark Devenport. Not much of it is online, but I am in 2:49-3:35 here:

Some viewers' responses were a little, er, unusual...

The most important piece that I wrote on Northern Ireland was for the Irish Times, published 10 July, setting out the three preconditions as I see them for a referendum on unifying Ireland to be successful. 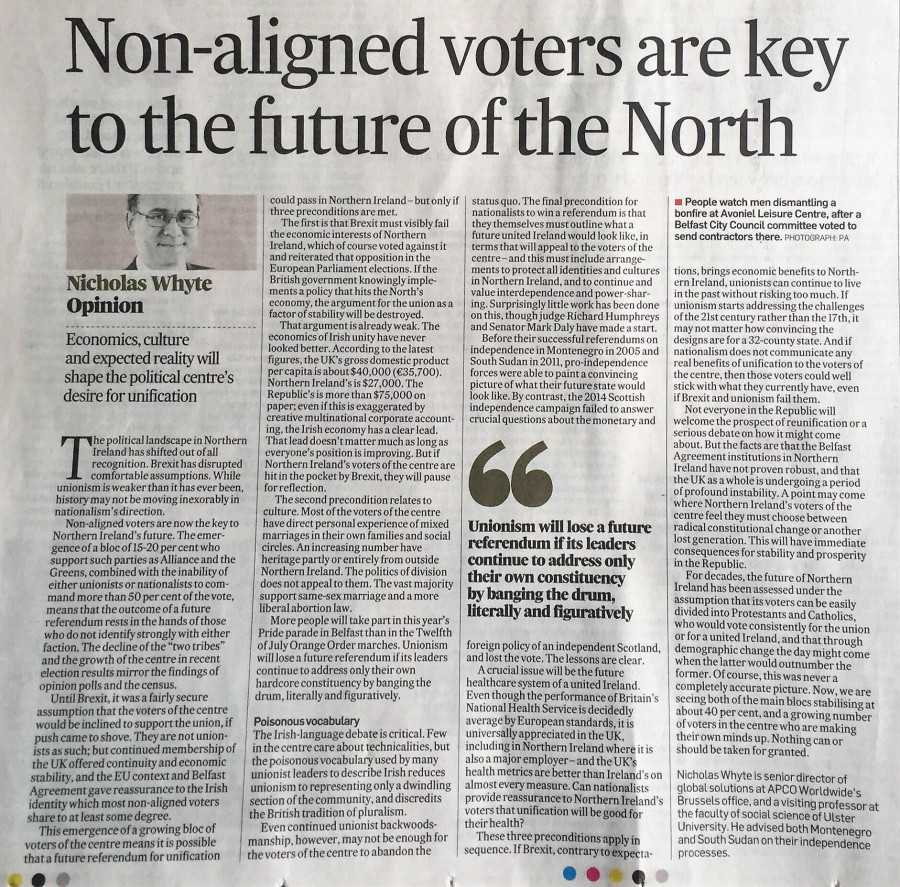 (Click to embiggen)
Apart from that, on Northern Ireland I was quoted three times by Rory Carroll in the Guardian:
12 July: Belfast bonfire 'victory' masks tide turning against loyalist Twelfth
15 August: How the 'neithers' could decide Northern Ireland's political fate
20 December: How Northern Ireland vote was punishment for Stormont impasse

I also did a piece for the Newsletter on 10 January, being sceptical about the SDLP-Fianna Fáil link.

Finally, a Belgian journalism student interviewed me a couple of weeks ago for a piece explaining the connection between Northern Ireland and Brexit.

Apart from the BBC election coverage, I did two televised panel discussions with Tian Wei on CGTN's flagship programme World Insight. The first was on the Biarritz summit. My bits are are 14:40-18:30 and 23:25-24:50.

In print, I was interviewed by Bloomberg on speculation about the future of Margrethe Vestager on 13 March. (A memorable interview for me; I was at the airport in Prishtina, Kosovo, talking down the line on a connection which seemed just about robust enough...)

I got some decent coverage from a 9 May Foreign Policy piece on why some countries don't have populism, which led on to an interview with Euronews on the same topic - the English version of the story did not use the video, but the Spanish, Hungarian and Portuguese versions did. Here's the Spanish version: I am in it at 1:19-1:54 and again at 2:18-2:44.

I did a more general preview of the elections for the Law Societies, and commented on the energy/environmental aspect here.

The Hugo Awards brought me a spot on Five Books, a site I have loved if not followed closely for ages, so I was thrilled about that - it had a lot of resonance. The awards themselves were covered in Irish Tech News, and Polygon quoted me on Archive Of Our Own qualifying for the final ballot.

Finally, I did a lot of speeches etc throughout the year, but two of my hosts put out press releases mentioning me, within a week of each other in March: the Cass Business School and the National Council of Insurance Legislators.

It's not all that easy to measure Instagram impact (and they are going to make it more difficult). These two videos both got between 300 and 400 views.

(A visit to the Vatican)

(A visit to Dordrecht)

(The two younger kids at a comics festival in Brussels)

I had a couple of Facebook posts that went viral this year. The best performing was one where I didn't actually write the material myself, but shared it from a screenshot, and it got picked up by the two linguistic communities concerned, etting 99 shares.


This Brexit commentary was my own material, and got 21 shares.


My five Facebook posts that got the most comments, in ascending order, were this Brexit commentary (actually copied from an FT journalist's tweet, with attribution):


...which was beaten by this Brexit commentary:


...which was beaten by this very brief Brexit commentary:


...which was beaten by this crowdsourcing question, which led to a blog post and then my Five Books interview:


...but all were beaten by this slightly stalkerish meme riffing off the Conservative Party leadership contest.


My five most liked (etc) Facebook posts of the year were in general less political. In fifth place, sheer vanity:


Beaten by this, where I should have credited the artist:


Beaten by this scene of debauchery from the work Christmas party:


But coming in at a massive 640 likes is a picture of me and an adult relative who is not a Facebook user; it is therefore a private post, but even so 640 people liked it. If we are Facebook friends, you can see it here.

However I should say that my most-liked Facebook post of 2018 was made after I had worked out the numbers for last year; it was our Christmas day picture with the whole family.

I've been fiddling around with the methodology of rating top tweets using the analytics that Twitter provides, and I've finally come up with a solution that satisfies me - rank them all, by all the rankings available; and add together the reciprocal of each ranking to get an overall score. That gives me a top 22 which I am goign to share with you. Tough, it's my blog.

In 22nd place, election day commentary and the one and only tweet of the year that got an app opened (whatever that means):

It’s time to revisit the Clangers’ commentary on the 1974 election.

(NB that Oliver Postgate, creator and voice of the Clangers, was the grandson of George Lansbury, leader of the Labour Party 1932-35).

21) Start of a bitter thread commenting on the UK's Foreign Office.

The collapse of effectiveness of the FCO, brought about by central government starving it of resources and ignoring its advice, is one of the most striking changes to global diplomatic structures that I have seen in the course of my career.https://t.co/aCWIN2VDNN 1/3

20) End of a long and bitter thread predicting No Deal as the most likely outcome of Brexit:

MPs (and UK govt) should concentrate on how to encourage EU27 to invest effort in negotiating with UK for another couple of months, if that proves necessary. Mood in Brussels now is that despite best efforts, no-deal outcome is most likely outcome; in that case, why wait? 20/20

18) The Twitter version of the crowdsourcing question, which led to a blog post and then my Five Books interview:

My non-sf reading friend (male, my age) asks, what are the #3BestSFNovels? Or alternatively for my #3FavouriteSFNovels.

Let’s crowdsource this. Feel free to answer either or both:

What do you think are the #3BestSFNovels?
and/or
Which are your #3FavouriteSFNovels?

17) Start of another pessimistic Brexit thread.

16) A nice little video moment from the British parliament attempting to twist Sir Ivan Rogers, who played a straight bat in return (if that is the right metaphor):

15) One of a series of tweets (that got misinterpreted by a Belfast journalist), projecting the local government election votes onto the Westminster constituency boundaries.

#GE2019 The first, obviously, is North Down where Independent MP Sylvia Hermon is retiring. DUP are ahead here on May local govt figures - but Alliance can surely expect tactical boost from Greens not standing. (Other candidates are UUP and Conservatives.)https://t.co/bgF0WNt31D pic.twitter.com/Fdb2y1r9l4

14) The Flemish press came up with a good term for Boris Johnson.

Glorious new bit of Flemish vocabulary for me from @DeStandaard profile of Boris Johnson today: “tafelspringer”, which combines the concepts of trouble-maker, show-off and smart-alec, as in someone who jumps onto a table to tell everyone how clever they are. pic.twitter.com/idnSrXMdUR

13) Another Brexit thread, this time critiquing a POLITICO article.

How the UK lost Brexit battle https://t.co/aqDPtN4nhd Interesting, detailed piece by @herszenhorn and @TomMcTague. Good on chronology of UK’s failure, but I think some details are missing / slightly off. This thread details the UK’s 3 biggest strategic failures as I see it. 1/9

12) Not very surprisingly, this got the most permalink clicks of the year.

In which the Attorney-General for the United Kingdom of Great Britain and Northern Ireland finds a pithy one-word synonym for "You know nothing, Jon Snow". https://t.co/7sjhRrFIYZ

10) In the run up to the Hugo voting deadline, some votes were very close.

9) Another of the tweets projecting local election results in Northern Ireland to Westminster constituency boundaries.

#GE2019 In two other Belfast seats held by DUP MPs, the party was just ahead on May LG figures. In E Belfast, the lead over Alliance was less than 50 votes. Both Alliance and DUP have tactical reserves, but DUP will aim to squeeze UUP candidate's vote. https://t.co/CaHiZvKqhG pic.twitter.com/ZYivt0N9HK

8) One of the two most successful local election commentary tweets.

#LE19 Ballyarnett (Derry+Str) SDLP's Dobbins in on 1st count; SF will lose one of their three to Aontu (Anne McCloskey). Last seat between 3rd SDLP and PBPA, a gain from Ind (Quigley, who did not stand again). First potential gain I've seen for SDLP all day...

Mine is Henry Upper Lisburn Mortar-Pestle. What’s yours?

6) Start of my local government elections thread. It got the most "detail expands", whatever that means.

#GE2019 I've been going belatedly through the May 2019 local government election results for Northern Ireland, and projecting them onto the Westminster / Assembly constituency boundaries. In three cases, the party with most votes in May does not hold the Westminster seat.

5) My most popular local election tweet - I think because it was a fairly early result, and a dramatic one. Also got the most hashtag clicks (on #LE19).

4) My best scoring tweet from European election commentary. I'm pleased with this picture. I had just taken one with Naomi Long and Diane Dodds looking away, and Martina Anderson looking at me; as I took it, Martina Anderson said my name and the other two immediately looked in my direction, so I got this much better shot as well.

3) The best performing of my tweets on the local election votes, projected to the Westminster boundaries, and also had the highest :engagement rate" (whatever that is) of any of my 2019 tweets. South Belfast is a very volatile seat.

#GE2019 In South Belfast, the Alliance Party got the most votes in May LG, just ahead of the DUP. Sinn Féin not standing will help the SDLP; who will Green votes help more, SDLP or Alliance? How many votes will divert to Aontú? How many to the UUP?https://t.co/itKW0dM6iP pic.twitter.com/H8B0K008NP

2) Another of my long Brexit threads. This one got me the most new followers. (Five, which is the same as the equivalent tweet last year.)

1) Top tweet of the year, by a long way. It got the most impressions, most engagements, most retweets, most likes, most user profile clicks, most url clicks, most media views and most media engagements of all of my 2019 tweets. Sadly the content is not original, but deserved to be reposted.

As the deafening noise of tumbleweed grows, here are the three LJ posts that got five or more comments this year.

2 June: a post about objets d'art in Utrecht and Leuven. 5 comments.
1 December: Dr Strangelove, the book it was based on and the book of the film. Also 5 comments.

18 February: The 54 whole numbers whose square root is less than or equal to their number of divisors. 8 comments.

How the mighty have fallen.

(Last year I tried posting an analysis of my LinkedIn posts as well, but it's really impossible to pull meaningful statistics.)
Collapse