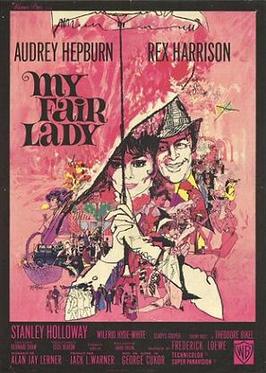 The other Best Picture nominees were Becket and Zorba the Greek, which I have not seen, and Dr. Strangelove and Mary Poppins, which I have. On the two IMDB rankings of 1964 films, My Fair Lady rates 5th on one list and 7th on the other. Dr. Strangelove, Mary Poppins, Goldfinger and A Fistful of Dollars are ranked ahead of it on both lists. 1964 is one of my better years for films: apart from Dr. Strangelove and Mary Poppins, I have also seen Goldfinger, Zulu, A Shot in the Dark, A Hard Day’s Night, Topkapi, Carry On Cleo, and The 7th Dawn (in which my late aunt can be seen dancing at around the 38 minute mark). The Hugo went (as previously discussed) to Dr. Strangelove. Here's a trailer.
When I was thirteen, I really loved this film. It was a time when our parents' circle included such linguistic luminaries as Melissa Bowerman (whose daughter I caught up with last month, for the first time in nearly 40 years), Bob Kirsner, Piet Zoetmulder and Mario Alinei, not to mention C.J. Bailey, and I was myself fascinated by how languages evolve and change (a fascination that has not completely left me). And here was a film about my personal obsession, and one with wonderful music and acting as well. I more or less knew it by heart.

And wow, it hasn't aged well at all. What struck me hard, watching it again for the first time in decades, is just how bad Higgins' misogynistic treatment of Eliza is - constant negging, undermining and pretty close to gaslighting. And the film is not redeemed by the ending - Higgins shows no sign of remorse or repentance, just continuing desire for Eliza; and yet she comes back to him anyway, after a brief moment of defiance - as an abused partner returns to the devil they think they know. One can only imagine the response she would get if she posted about her situation to r/relationships or Captain Awkward. I'm afraid that despite the spectacular delivery and glorious music, I'm demoting it to three-quarters of the way down my list, below How Green Was My Valley, which also has quaint Brits singing, but gets the gender and class stuff much better, and above Going My Way, whose merits and demerits are both fewer in number.

Before I get into the nitty gritty, I have to be a complete language nerd about one particular line. In the first song, Rex Harrison as Higgins sings, "Norwegians learn Norwegian; the Greeks are taught their Greek."

I have been wondering a bit about this line. Of course, Lerner and Lowe probably chose Norwegian and Greek as the two examples mainly for rhythm and rhyme. There are not a lot of alternatives. Other languages with more speakers than Norwegian, whose names both describe the people who speak them and are pronounced as amphibrachs include "Bengali", "Korean", "Somali", but I guess that "Norwegian" fits the cultural context of "My Fair Lady" better. (You could also consider "Ukrainian", "Romanian", "Hungarian", "Albanian", "Bulgarian", "Armenian" and "Mongolian", but a lot of people would pronounce them with four syllables, while I think most English speakers would elide the "i" in "Norwegian".) And the only other language I can think of which would rhyme with "speak" is "Creek". (One could stretch a point for "Arab-eek" or "Amhar-eek", or with a bit more geographical outreach "Tajik", but "Greek" is an understandable choice.)

But the interesting thing about the line "Norwegians learn Norwegian; the Greeks are taught their Greek" is that in 1956, when the musical of My Fair Lady was made, and in 1964, when the film came out, it was not true. At least, not completely. Both Greece (at the time) and Norway are classic examples of countries in a state of diglossia, where there were actually two versions of the official language. Anyone learning Norwegian even today must choose between Bokmål and Nynorsk (Bokmål is a bit like Danish; Nynorsk is a bit like Bokmål). And until 1974, anyone learning modern Greek had to choose between the nineteenth-century Καθαρεύουσα and the (literally) demotic δημοτική (which is now the only standard). It is ironic that the two languages Lerner and Lowe chose for Professor Higgins' line are the two European languages of which the statement was least accurate at the time they were writing.

I strongly suspect Lerner and Lowe were unaware of this wrinkle. More likely, if there is another reason beyond euphony, they chose Norwegian as a mild homage to Ibsen, whose dramatic influence on Shaw is well attested, and Greek as a reference to the original source of the Pygmalion myth which Shaw drew on for the plot and title of his play.

Moving swiftly on, we have a couple of repeat actors who have been in previous Oscar winners - in fact, the two who got Best Supporting Oscar nominations but did not win were both in Laurence Olivier films. Stanley Holloway was the Gravedigger sixteen years ago in Hamlet. In 1964 he was 73, but really could pass for at least a decade younger. 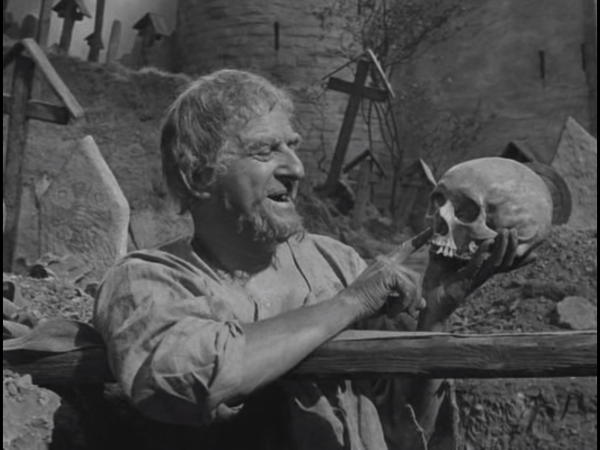 And Gladys Cooper, aged 76 in 1964, was Beatrice Lacy, the sister of Olivier's character Maxim de Winter, in Rebecca, twenty-four years ago. 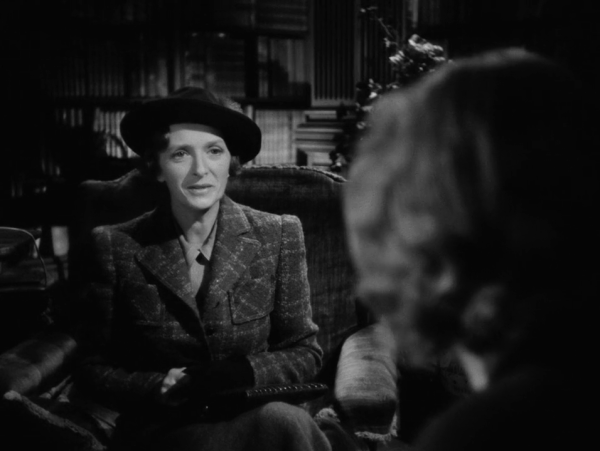 (Here's a trivia question for your next pub quiz: what do Rex Harrison, the actor Richard Harris, the disgraced Conservative cabinet minister Jonathan Aitken and Aitken's cousin Peter have in common? The answer is that they all married the same woman, Elizabeth Rees-Williams, who is still with Jonathan.)

Anyway. I was so struck by the misogyny of the film of My Fair Lady that I went back and watched the 1938 Pygmalion, starring Leslie Howard (in Gone With The Wind the following year) and Wendy Hiller, for which George Bernard Shaw won an Oscar for Best Screenplay (making him the first person to win both an Oscar and a Nobel Prize; he has now been joined by Bob Dylan and arguably Al Gore). You can see it in full here. I also consulted the original 1913 theatre script - written 25 years before the 1938 film and 51 years before My Fair Lady hit the screens.

It's really striking that in the original play, Higgins is clearly directed to be "entirely frank and void of malice that he remains likeable even in his least reasonable moments", whereas Harrison's portrayal is not at all likeable at any time; and even more striking that the 1938 version actually tones down Higgins' chauvinism from the original script, some of the nastier passages about Eliza removed entirely and some of the epithets he uses softened. Both are still pretty bad, but the 1964 film is the worst. The 1938 film, like the musical and the 1964 film, has Eliza returning to Higgins in the end, but given that he has not been as nasty to her it's a bit more plausible. Shaw, of course, disapproved and wrote a long postscript to the original play, explaining how Eliza successfully manages her relationships with Higgins and Pickering after marrying Freddie.

Part of it also, I think, is the age of the leading men. Rex Harrison was 56 in 1964; Leslie Howard 45 in 1938, and playing young. Harrison's Higgins is mature and arrogant; Howard's Higgins discovers that he still has something to learn. (Note also the completely different dynamic for Robert Powell, aged 1937, in the BBC's 1981 adaptation of the original play, which incidentally brings back Mona Washbourne, who plays Mrs Pearce in the 1964 film, for the same role 17 years later.) I have to say also that Audrey Hepburn's Eliza seems to have much less gumption and depth than Wendy Hiller's, which contributes to the negative dynamic. Beautiful though Hepburn is, I don't think she was trying terribly hard here, and I can't really blame her. 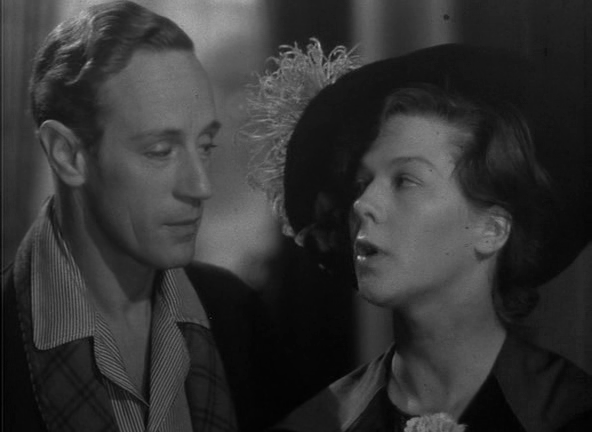 (More trivia for Brussels people - Audrey Hepburn was born at Rue Keyenveld 48, just off Rue du Prince Royal between Louise and Porte de Namur metro stations. It's a few doors down from Les Brassins which you may have been to. There's a plaque on the wall.)

One rather sad note - the ambassador hosting the ball (a scene which incidentally was originated by Shaw for the 1938 film) was played by Henry Daniell, who died suddenly the night after his scenes were shot. So we are seeing an actor with literally hours to live.

Also, before I get onto happier topics, I'll just note that there is not a single non-white face in London in either 1938 or 1964. Tom Jones, set a century and a half earlier, scores better.

OK. To happier things. This film has some wonderful songs, and one or two utterly stunning visuals. My absolute favourite sequence is the Ascot scene, from start to finish, designed by Cecil Beaton, new to the musical and not in either of Shaw's treatments (which have Eliza's first faux pas taking place at a tea party chez Mrs Higgins). Here's the start, mixing 1960s fashions with 1900s reserve:
followed by the actual race:
But it's a tough call between that and "Wouldn't It Be Loverly":
Or indeed the two Stanley Holloway songs, "With A Little Bit of Luck" and "Get me To The Church on Time" (and again, remember, he's 73):
And the whole thing looks beautiful. So there's a lot to enjoy, provided you can tune out the message sent about 51% of the human race, and the entrenchment and endorsement of the patriarchy.

You can get the 1964 My Fair Lady here, the 1938 Pygmalion here, and the original script here.

Next up is The Sound of Music. I hope it has aged better.