This won the 1976 Hugo and 1975 Nebula Awards for Best Short Story. Third paragraph of the main section of the story (there is also a short introduction):

And then my gaze clambered higher still, up the 222-foot sturdy tower, to the top of which was moored the nose of the vast, breathtakingly beautiful, streamlined, silvery shape which was making the shadow.

When I wrote this up in July 2001 - alas, much more innocent times to be writing about tall structures in New York - I said this:

The story is a real jeu d'esprit from Leiber. He warms us up in the first paragraph:

This year on a trip to New York City to visit my son, who is a social historian at a leading municipal university there, I had a very unsettling experience. At black moments, of which at my age I have quite a few, it still makes me distrust profoundly those absolute boundaries in Space and Time which are our sole protection against Chaos, and fear that my mind - no, my entire individual existence - may at any moment at all and without any warning whatsoever be blown by a sudden gust of Cosmic Wind to an entirely different spot in a Universe of Infinite Possibilities. Or, rather, into another Universe altogether. And that my mind and individuality will be changed to fit.

Any reader who knows Leiber's classic "The Big Time", published almost twenty years before, is already alerted to the fact that fun with alternate history lies ahead. As he walks along Broadway, he looks up and sees a Zeppelin moored to the top of the Empire State Building; and his first person narrative shifts to the persona of a patriotic German airship engineer, in a New York where the traffic is driven by electricity rather than the internal combustion engine, where the "blackamoors" are clearly emancipated, and he himself has a military bearing, a black moustache and a lock of hair that tends to fall across his forehead. His son is still a social historian, but now they are meeting for lunch in the Zeppelin departure lounge, and the date is no longer 1973 but 1937.

The narrator, whose name is no longer Fritz but Dolf or Dolfy, and his son discuss how their world could have developed differently. What if the great scientists Thomas Edison and Marie Sklodowska had not married? She was being courted also by a French physicist called Pierre Curie in the 1890s. If she had become Madame Curie, she and Edison would never have had a son whose invention of a new type of electric battery was used by Henry Ford for his automobiles. Also, if Germany and the United States had not been on such good terms, the Americans might not have been willing to sell helium - and the airship industry would then have used hydrogen, and might well have literally crashed and burned.

Also, what if the US's post-Civil War reconstruction had failed under the threat of Ku Klux Klan violence? The consequences for the "American character" could have been very bad, and the freed slaves would effectively have been re-enslaved. Most sensitive of all, what if the Allies had not gone for an unconditional surrender of Germany in 1918, but instead settled for an armistice? Germany might not have accepted its defeat but instead have nursed a grievance which could have led to a militarist regime and a new war.

And our narrator's time runs out, and as he runs to catch that Zeppelin, he finds the door is shut, the departure lounge disappears, and there is no Zeppelin. A sinister fellow diner, Jewish by appearance, tells him that the Hindenburg, filled with hydrogen, burned up completely earlier that day in New Jersey, and warns him that he looks a bit too much like Adolf Hitler - "If I were you, sir, I'd shave my moustache." After another hiccup, he finds himself back in the world he knows best, "transiting from 1937 (where I had been born in 1889 and was forty-eight) to 1973 (where I had been born in 1910 and was sixty-three). My name changed back to my truly own (but what is that?)" He meets his son and goes for a coffee in Greenwich Village.

To turn oneself into Adolf Hitler takes a certain amount of chutzpah. To turn Adolf Hitler into an enlightened Zeppelin engineer and good guy takes even more. The holes in the story, taken as a reasoned cartography of how things might have been different, are huge - Hitler could hardly have had a son who was a cutting-edge social historian by 1937 no matter what timeline you use; the Edison electric battery sounds a bit unlikely; the historical reasons for the failure of Reconstruction in the 1870s and the Allies agreeing to the armistice in 1918 were pretty compelling.

But if you want a totally serious treatment of this theme, you should read Virtual History, a collection of essays by noted historians edited by Niall Ferguson. This story is meant to be fun. It's not one of the classic, ground-breaking stories of the sub-genre, like L Sprague de Camp's Lest Darkness Fall or the author's own The Big Time. It doesn't take itself as seriously as the recent series of heavy volumes by Harry Turtledove and Harry Harrison, but is none the less far, far better. This story is classic Leiber. I like it.

It has to be said that this is not obvious Hugo or Nebula winning material though. The story of that year with most staying power appears to be "Child of All Ages" by P.J. Plauger, most recently republished in the Jack Dann collection Immortals in 1998, which was runner-up for the Nebula award and came third in both Hugo and Locus polls.

On rereading, I do not like this story anything like as much. The humour of the piece is in particularly good taste. The lines about Jews particularly grate. It also grates that the world would have been saved if Marie Sklodowska had married an American instead of a Frenchman. Hitler is not funny (Doctor Who tried to make him funny by putting him in a cupboard, but it didn’t work). I know more about Reconstruction and the end of the first world war now than I did in 2001, and Leiber's presentation of those topics is facile and misleading. The style is good, as ever with Leiber, but the ideas are not as interesting as he perhaps thought they were, and the fact that it won both Hugo and Nebula says something about the limited perceptions of voters as well.

For some reason there were 12 other stories on the Nebula shortlist, and six on the Hugo final ballot, so I am not going to list all of them (I can't remember having read any of the others anyway). The other three on both final ballots were:

"Child of All Ages" by P.J. Plauger, which as noted above has had at least as much staying power
"Sail the Tide of Mourning" by Richard J. Lupoff
"Doing Lennon" by Gragory Benford

This was one of the rare years when there were three joint winners of the Hugo and Nebula awards across the written fiction categories. Next up is the joint winner of Best Novella that year, an old favourite of mine, "Home is the Hangman" by Roger Zelazny. I hope it wears a bit better.

The easiest place to get "Catch That Zeppelin!" is in the Leiber collection Ship of Shadows, available here. 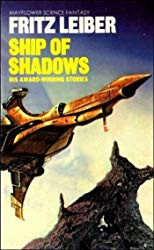