Sunk in the grass of an empty lot on a spring Saturday, I split the stems of milkweed and thought about ants and peach pits and death and where the world went when I closed my eyes. I must have lain long in the grass, for the shadow that was in front of me when I left the house had disappeared when I went back. I entered the house, as the house was bursting with an uneasy quiet. Then I heard my mother singing something about trains and Arkansas. She came in the back door with some folded yellow curtains which she piled on the kitchen table. I sat down on the floor to listen to the song’s story, and noticed how strangely she was behaving. She still had her hat on, and her shoes were dusty, as though she had been walking in deep dirt. She put on some water to boil and then swept the porch; then she hauled out the curtain stretcher, but instead of putting the damp curtains on it, she swept the porch again. All the time singing about trains and Arkansas.

This was Morrison’s first novel, a gritty tale of rape, incest and racism, told in an intense mosaic style, with life for black girls in her home town in the 1960s contrasted with Dick-and-Jane fantasies; and narrative layers and personal histories gradually being unpeeled so that you can pretty much understand everyone by the end. In her foreword to my edition, the author says:

One problem was centering the weight of the novel’s inquiry on so delicate and vulnerable a character could smash her and lead readers into the comfort of pitying her rather than into an interrogation of themselves for the smashing. My solution—break the narrative into parts that had to be reassembled by the reader—seemed to me a good idea, the execution of which does not satisfy me now. Besides, it didn’t work: many readers remain touched but not moved.

I was moved; so it worked for me. You can get it here. 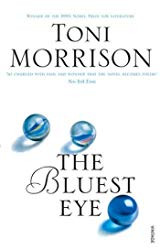