You should study English, says Marianne.
Do you think I should, or are you joking?
I think you should. It’s the only subject you really enjoy in school. And you spend all your free time reading.

I had missed all the hype around this book, which won the Irish Book Awards Novel of the Year, the Costa Award for Best Novel and was the Waterstone's Book of the year 2018 as well as being on the Mann Booker Prize longlist. The two protagonists grow up in the same County Sligo town and end up both attending Trinity College Dublin, and develop a deep friendship which is also an on-again, off-again love affair. Connell, the working-class popular kid at school, finds that at university he cannot fit in, while Marianne, posher but a loner at school, blossoms in Dublin (and elsewhere in Europe). Both are children of single mothers (Connell's father was never on the scene, Marianne's has died) who are also well portrayed (Connell's mother is basically sound, Marianne's isn't).

What I found particularly refreshing is that Rooney shows both protagonists as entirely mature and adult, making conscious choices if sometimes bad choices. They both have other relationships and friendships which are all convincingly and economically depicted. There is plenty of sex here, but it is again economically portrayed rather than going into titillating detail (though Marianne does get a bit kinky). What happens before and after the physical part is more important, and the journey that both of them take makes sense. Apparently there is a TV series coming.

My student days are long ago, but I found a lot to empathise with here. My siblings both studied at Trinity, and so did some of my friends from school, so although I was a Cambridge undergraduate and went on to do my PhD in Belfast, I hung out often enough in the same places as Rooney's fictional characters twenty-five years later, and had one or two winces of recognition. And of course my own memories of student romance and relationship building, whether in Ireland or in England, are still pretty vivid. I liked it a lot. You can get it here.

This was my top unread book acquired in 2018. Next on that list is Oathbringer, by Brandon Sanderson. 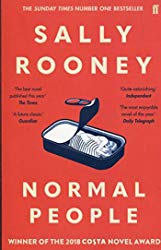