He slumped back in his chair, yawning. His eyes began to glaze over at the thought of the steaming cup of sweet, dark tea that was waiting for him at the neon-lit doughnut shop in Penn Station; of the other regulars who occasionally dropped by to sit around the plastic-topped table—the Sudanese bankteller, the well-dressed Guyanese woman who worked in a Chelsea used-clothes store, the young Bangladeshi man from the subway newsstand. Often they just sat in companionable silence around a circular plastic-topped table at the back of the shop, sipping tea or coffee out of paper cups while watching tapes of Arabic and Hindi films on a small portable monitor. But every once in a while, there would be a discussion, or they would exchange tips–about a gadget that was on sale somewhere, or some new scam for saving on subway tokens.

The Calcutta Chromosome is a fascinating book in which the research of Ronald Ross into malaria in 1898 turns out to have been something of a sham, in fact the outcome of manipulation by shadowy forces whose nature is only hinted at. The story is told in roughly three timelines: a near-future New York (probably roughly 2019), where an unassuming Egyptian with a friendly Siri-like AI is sucked into research on how and why a former colleague who was obsessed with Ross disappeared in 1995; the story from the former colleague's point of view, as he goes to Calcutta to get first-hand evidence on what Ross actually did; and the story from Ross's own point of view, which does not really explain all that much. The western versions of science and history are in conflict with Indian traditions, and subverted by the mysterious immortal character Behind It All; there is a memorable ghost train moment as well.

It's a really fun read - Murugan's obsession with Ross could have been weritten as tedious info-dumping, but Ghosh turns it into some very strong characterisation, and the other Indian characters of 1995, the poet Phulboni, the journalists Sonali and Urmila, and indeed Calcutta itself are vividly visualised. The ending is a bit of a let-down, in that the various plot strands are not really brought together and none of them is really resolved, though hints are left for the reader to draw their own conclusions. Still, I'm glad that the Clarke judges stepped outside the usual circles of genre fiction to recognise this. You can get it here.

The Calcutta Chromosome won the Arthur C. Clarke Award in 1997, the year that The Sparrow won the Tiptree Award and Excession the BSFA Award. The other shortlisted books were Blue Mars, by Kim Stanley Robinson; Gibbon's Decline and Fall, by Sheri S. Tepper; Looking for the Mahdi, by N. Lee Wood; The Engines of God, by Jack McDevitt; and Voyage, by Stephen Baxter. (Odd note: the losing five all had the same publisher.) I have not read the Wood, and think I have read the McDevitt but cannot remember anything about it. I have certainly read the other three. I don't think Blue Mars stands well on its own considered separately from the two previous volumes of the Mars trilogy, and would question whether it is really even a novel, though admittedly it won the Hugo; and Gibbon's Decline and Fall is not Tepper's best.

But it's interesting that the judges decided to go for The Calcutta Chromosome rather than Voyage, which is much more firmly in the Arthur C. Clarke tradition and which I think would have got my vote if I'd been a judge in 1997 (it has a much more satisfactory ending). Poor Stephen Baxter has had seven novels shortlisted for the Clarke, but has never won it. Voyage did win the Sidewise Award for Alternate History that year.

Next up in this sequence will be that year's BSFA-winner, Excession, by Iain M. Banks (a reread). 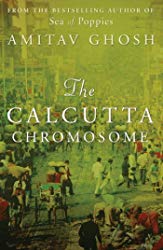