We pulled him off the poor old Shortie and were met at the gate by Fee, who seemed rather impressed by Nemo’s performance. Muggings she knew all about, but this was the first time she’d ever seen one used as an excuse for a lecture. Fee conducted us to the landing site and it was my turn to be impressed.

Very much in the shadow of Bester's better-known The Demolished Man (winner of the first Hugo for Best Novel) and The Stars My Destination, this was his first novel for almost 20 years when it came out in 1974. Critical reaction then was disappointed; Bester had perhaps laid the path for the New Wave writers of the intervening period but was now behind the curve. Forty years on, I must say I enjoyed it a lot; the plot concerns a group of immortals in the very near future, who are dealing with a supercomputer that has acquired human intelligence, and the style remains pyrotechnical - and yet I never lost track of what was going on, or why we should care about these characters. Bester's reading of Native American traditions would not really pass muster today, but in fact he uses the perspective of his Cherokee characters to make some statements about American society in general and to an extent also about gender politics. I came away feeling that this has been underrated and might be due a reappraisal. You can get it here.

This was my top unread book acquired in 2016. Next on that list is Dragonworld, by Byron Preiss. 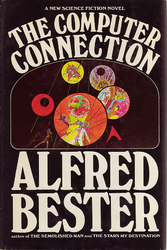