The centre of the ring suddenly blazed with light, whiter than white, painfully bright. Two men in dark suits stepped out of the light. The first was a sharp-faced white man with fair, curly hair. Everett recognised the second as the Prime Minister. Their steps, begun on another world, carried them a long way in the moon's low gravity. The Prime Minister lost his footing for a moment but recovered with dignity. Madam Moon stepped forward to meet them. A nod from her indicated that he should do the same. He had worked out a way of walking here that didn't send him bounding into the air looking stupid. It was a kind of low shuffling. It was not very elegant, but it kept him on the floor. The fair-haired man had the trick of it but the Prime Minister did not. Every stride took him up into the air and down again.

Sequel to Planesrunner, which I read last year. Our protagonist continues to try and tie things together between his/our own reality, a steampunk alternate timeline, and some much nastier worlds. I got a bit lost with the evil robot doubles but generally enjoyed it. You can get it here.

This was my top unread book acquired in 2013. Next on that pile is Halo: The Thursday War, by Karen Traviss. 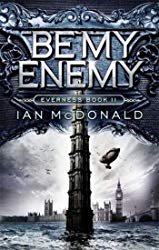