No eyes were cast in the direction of Chile Gongaro to see what might be the effect on him of the implied aspersion upon his sub-continent. Chile Gongaro continued to grin broadly. The fact that his friends rarely displayed any con-sideration for his feelings might be taken as an indication of the extent to which they regarded him as one of themselves. The Grand Duke Ferdinando, whose sister was married to the President of Peru and who ordinarily took an insult to one of his family as an insult to himself, the head of the family, might have protested at the blanket condemnation of South American republics but decided to let it pass and not mar the happiness of the gathering.

The fourth and last novel by my distant cousin Brian Killick, published in 1977. This features a disparate group of friends united by the Camelot Club, “the premier gaming-club of London”. Almost of of them are rich men, but a key strand of the plot concerns the one mature woman of the group, who successfully makes money with a scheme for the part-time and short-term hire of richer people’s chauffeurs, while they are waiting for their main employers to get back from lunch - played for laughs, but perhaps a presentiment of the gig economy. Another member of the group is the chronically poor exiled Emperor of Byzantium, who I’m afraid is funny because of his poverty and dynastic aspirations.

Another strand includes the separate attempts of both the Govenment and the members of the Camelot Club to bail Britain out by throwing the country on the mercy of a visiting Arab sheikh and ruler of a very wealthy country. The team of chauffeurs is used to kidnap him, and the Camelot Clubbers then discover that the sheikh is in fact a British aristocrat by birth, so That’s All Right Then. I find it fascinating that in these early years of the UK’s European engagement, there was still a yearning to find a separate (preferably at least partially indigenous) source of stability.

The Grand Duke Ferdinando, exiled heir to an unspecified principality, invades Paraguay, but fails and is executed. Another clubber, an MP, disappears under a cloud of financial misdemeanour leaving his clothes folded on the beach (a topical reference). The lower classes (as opposed to impoverished gentility) get very little notice, other than the chauffeurs (identified by their employers). It is rather striking that in a novel named for a fictional gaming club, there is very little actual gambling.

Family is quite important here, a more secure basis than the pretensions of the state (government and police) or capitalism (the proto-Uber scheme is played for laughs). One of several incstances of the hereditary aristocracy has been mentioned. The Grand Duke wants to bestow one of his sisters on the exiled Emperor (who has been turned down by the Ethiopians, which is also interesting). The proto-Uber lady has a marriageable niece. Most of the main characters are referred to by their names rather than by their roles - unlike in the other three books.

I can’t claim that this is great literature. But it has the best integrated plot and most attractive characters of Brian Killick’s four novels, and it’s an interesting insight into an insecure moment of British history as well. If you like, you can get it here.

Another John Lawrence cover, featuring the proto-Uber lady, the sheikh and a chauffeur being anxiously watched by the other club members. 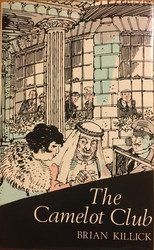