Second paragraph of third chapter (a long one):

'Well, it's nice to know that the creature can smile,' continued Beatrice. 'I sometimes wonder whether Madame Balzac is human.' Sidney tittered again. The third occupant of the lift stretched her smile a little further as evidence of continued politeness. Beatrice and Sidney seemed to be forever talking of that Madame Balzac, who must be a very old and dear friend. So real had she become as a result of constant reference that she might have been in the lift with them. It seemed that almost as soon as her changing moods were known to Beatrice and Sidney they were communicated indirectly to the caretaker, who was the third person in the lift. The caretaker learnt by overhearing, which she could not but do, when Madame Balzac looked sour in the morning or surprisingly cheery in the evening. 'Perhaps Madame Balzac has won the football pools.' Sidney would giggle helplessly. The state of Madame Balzac's health was equally promptly and thoroughly known to the caretaker. 'I should keep well away from Madame Balzac if I were you, Sidney. I think she has a cold coming on.' The surprising thing was that the caretaker could not remember ever meeting the much talked of Frenchwoman. She knew by sight many of the visitors to the flat of Beatrice and Sidney and had never laid eyes on anyone who could be identified as the mysterious Madame Balzac. What was the Frenchwoman doing in London and how had she come to occupy such a large part in the lives of Beatrice and Sidney? The caretaker felt that she knew her almost as well as did Beatrice and Sidney and thought that she did not like her. She sounded a tiresome woman, preoccupied with her health and her moods and selfishly taking up a disproportionate amount of time in the lives of her long-suffering friends. Perhaps she was lonely, a foreigner on her own in London. Beatrice and Sidney were well-known for their adoption of lame ducks. So surely had Madame Balzac become part of the small change of daily life that in early days the caretaker had been moved to enquire after her when most unusually Beatrice and Sidney, sunk in their own thoughts, had not mentioned the name. The caretaker was hurt and offended by the wholly unpredictable response to her kindly-meant enquiry. Beatrice became quite hysterical with laughter and Sidney almost fell about the place. After a few such reactions the caretaker learnt to desist from introducing the name of Madame Balzac. She felt that she had been very obviously put in her place. It was one thing for Beatrice and Sidney to discuss their friend in her hearing, but it was another, and forbidden, thing for her, a servant of a sort, to presume to take an interest in that friend. The lift arrived at its destination. Beatrice, scooping up Camus from the floor and tucking him securely under one arm, stalked forth. Sidney trotted behind. 'How is Sir Charles?' the caretaker remembered to call after the retreating backs. Beatrice and Sidney paused and turned. 'Sinking,' said Beatrice portentously. 'Sinking,' echoed Sidney.

This is the third of the mid-1970s novels by my distant cousin Brian Killick, in this case about a fictional English version of the Academie Française, with the central characters being its secretary Sidney and his wife Beatrice (the allusion to the Webbs is lampshaded pretty early on). As with The Heralds, an opening comes up with the death of Sir Charles Mortlake, and most of the plot concerns itself with the intersection of Beatrice and Sidney's propensity to play practical jokes and the contest for the vacant seat, which is filled by vote of the surviving members of the Academy. Once again, I wondered when the book was meant to be set - there are references to the 1970s, but Sidney is said to have been appointed by Ramsay McDonald, whose last term as Prime Minister ended in 1935, and Sir Charles Mortlake's African research is implied to have been before the first world war.

My big problem with the plot is that the protagonists, Beatrice and Sidney, are just not very nice, although their marriage is sympathetically portrayed (the most sympathetically of any marriage in Brian Killick’s four novels). They mock the caretaker of their building by referring to her as Madame Balzac to her face (she never gets it); they also play practical jokes on the Academy members, which can lead to quite serious consequences. They themselves then suffer the (unexplained) killing of their dog. Having said that, there is some really well-written humour of misunderstanding, in particular centring on Pobjoy, a second-rate writer who is aiming for the vacant seat in the Academy, who is mistaken for a mental health worker, a travelling salesman and a spy at various points. There is also a particularly comic Field-Marshal (most of the members of the Academy are identified only by their current or former titles, which is true of a lot of the characters in Brian Killick's books). And the central theme, of a fading institution of the Establishment trying to get to grips with the spirit of the 1960s, never mind the 1970s, is similar to that of both The Nannies and The Heralds, but maybe done a little better here because the institution at the core of the story is wholly fictional.

Anyway, you can get it here. As with The Heralds, a nice cover by John Lawrence. 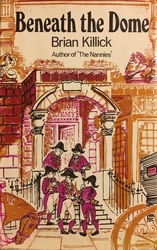