The race was begun. From an early stage the magnificent Clarenceux was clearly the front runner. He had been passed over once before. When he, whose impending retirement occupied the thoughts of the members to the virtual exclusion of all else, had been appointed Garter King of Arms at the end of the war no one was more surprised than Clarenceux. It was as one who was already second in rank at the College that Clarenceux had gone to the war. He had taken it for granted that he would automatically succeed to the first place. When another and lowlier member was preferred to him the blow was crushing. By the time that an election had come round again Clarenceux, who was basically fair-minded, would have been prepared to admit, if anyone had been found brave enough to ask him his opinion, that in the peculiar circumstances existing at the end of the war probably the best man had been chosen. Clarenceux recognized that he was impatient and blundering and not equipped to cope with the difficulties of those early post-war days, but all that had changed now. The ship had entered calm waters. There was no reason why Clarenceux should not aspire to the highest position.

This is my distant cousin Brian Killick's second and best-known novel, published in 1973, which actually has a Wikipedia page (basically because it caught the attention of a Wikipedia editor who is a heraldry expert, back in 2006). It also has more owners than all his other books combined on both LibraryThing and Goodreads (this is not difficult).

The Heralds has a more coherent plot than The Nannies; unlike the other three, it's pretty obviously derived from a particular source, the 1949 film Kind Hearts and Coronets, whose protagonist serially murders nine of his relatives (all played by Alec Guinness) so that he can become the Duke of Chalfont. Here, Cecil Gascoigne, the Chester Herald, decides to eliminate all competitors from the race to become the Garter King of Arms, the UK's Chief Herald - though unlike in Kind Hearts and Coronets, his plan is not murder but intimidation and blackmail. Nonetheless, several of his targeted rivals do indeed die in the process.

The fundamental weakness of the plot is that it gradually becomes clear that someone else apart from the protagonist is also plotting against the heralds, but SPOILER we do not find out who it is, and the ending therefore left me a bit unsatisfied when I read this as a teenager and left me unsatisfied again now. Still, the eccentricities of the Heralds are sketched humorously and also sympathetically, and Gascoigne's plans to eliminate them from the race to become the next Garter King of Arms are intriguingly devious. I was also pleased to note minor characters named after my aunt Ursula and a favourite cousin known in the family as Bunty (neither sadly still with us). You can get it here.

The cover, like those of the other two books that I haven't got to yet, is a striking image by John Lawrence. He is still alive, at 85, and also did fantastic illustrations for the 1979 Watership Down, Tales from Watership Down and Lyra's Oxford. Here the heralds sullenly process through London, clearly not enjoying each others' company. 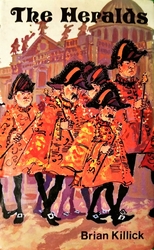