Brian Killick is my second cousin once removed, born the same year (1928) and the same generation as my father. His mother, Muriel, was my grandfather's first cousin, one of the first women to graduate from UCD, born in 1884. Her first husband, Sydney Killick, was killed in the first world war, and she married his brother, Neil Killick, Brian's father, who died in a Japanese POW camp in the second world war. It is really bad luck to lose a husband in each World War. Muriel's father Edward Whyte was my great-grandfather's younger brother, born around 1830. (My great-grandfather, the oldest brother, was born in 1826, and there was a brother and maybe a sister or two between them. Muriel, like her son Brian and indeed like my grandfather, was the fruit of a second marriage.)

Brian spent most of his career as an accountant, but published four novels in the mid-1970s. I met him a couple of times and read most of the books when I was much younger. I was delighted to discover a few weeks ago that he is still vey much with it, and hope to catch up with him sooner rather than later (he is 91). Meanwhile it was not very difficult to get hold of the four novels and read them.

The Nannies was published in 1972 (and is dedicated to the author's mother). Internal evidence suggests that it was written earlier. The second paragraph of the third chapter is:

‘Who is that dithering over there?’ she demanded sharply. ‘The girl’s got a uniform on.’

The Nannies sets the tone of the other four books, the slow disintegration of a traditional institution. In this case, the institution is a regular gathering of nannies in Kensington Gardens, women pledged to uphold the traditions of society and pass it to the next generation. The Bonham-Carters and Abel-Smiths are upstarts, orbiting around the periphery of the group. The first third of the book is spent building up the characters of the group; the rest of it tells how the group disintegrates through a variety of household disasters. The rot sets in when one of the nannies is kidnapped on a holiday in North Africa and ends up as a valued member of a harem, deciding that she will do better there than back at home; several others move on for one reason or another; the book begins and ends with Nanny Crumpet joining the group from her home in Ireland, and then returning once the group has disintegrated. It's gentle, establishment humour, based around people who are not very conscious of their own flaws.

I did wonder to what extent it drew from The Great Dinosaur Robbery, published in 1970, which features a group of British nannies (albeit in New York). But in fact I think that Brian Killick had finished this book before 1970, and it simply took a while to get published. One of the sub-plots is about a Tory MP who lost his seat in 1966 and is still struggling to find another in time for the 1970 election. One of the nannies has a certificate of her accomplishments signed by Princess Arthur of Connaught, who died in 1917; this is barely credible even in the late 1960s, and still less so for the 1970s. In general the mood is of a slightly older generation trying to get to grips with the Sixties.

The front cover is by Michael Foreman, who has done quite a lot of children's books over the years, but also illustrated the first, banned edition of J.G. Ballard's The Atrocity Exhibition.

You can get The Nannies here. 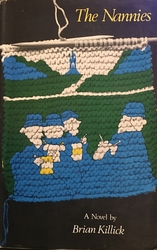