While the party fights within Fianna Fail since the departure of Sean Lemass in 1966 had focused on personal rivalries and hatreds, they also revolved around three enduring themes from past history: politics, nationalism and land. The way these continue to intertwine gives some pause for thought, especially in the era of the hegemony of Fianna Fail and the recent revelations by which that party in its post-de Valera persona will be judged. The party may have become increasingly 'constitutional' in the years when it monopolized power, but descriptions of the Fianna Fail ethos tend to rely upon some qualifying adverbs. 'We were', Charles Haughey remarked in one of his less guarded reminiscences, 'fairly sincere people."

This is a book based on five lectures given by Roy Foster in Belfast in 2004, published in 2007. It is sobering to realise just how different the world (and Ireland) looked before the crash of 2008. Brexit, of course, is the latest twist in the post-crash settling of world affairs as it affects Ireland (the Trump Presidency is more significant on a global scale, but affects Ireland less). In 2004 (or 2007) it was possible to write a book or set of lectures about the recent past, finish the final paragraph and think, job done. I don't think any historian could confidently do that in 2019.

And in fairness to Foster, he sort-of sees it coming - one of his warnings, particularly in the third chapter which concentrates on Fianna Fail, is that the relationship between property investors and politicians was far too close. The story of Charles Haughey's rampant and blatant corruption is always worth telling again, but this was enabled by a political system that saw no problem with linking property development and executive power. He doesn't completely see it coming, of course; in 2003, 2004 and 2005, Ireland's GNI per capita rose by 20%, 26% and 18%, and it was impossible at that point to envisage that the figures for 2009-12 would be -8% followed by three consecutive years of 4% decline. But historians are supposed to tell us about the past, not the future.

Foster's aim is to explain how Ireland modernised between 1970 and 2000. I don't think he quite manages to convey a grasp of the very big picture (he basically puts it down to luck and accident), but each of the chapters is a good scrutiny of important elements of the story. Chapter two is on the change in status of the Catholic Church; chapter three on Fianna Fail; chapter four on the Republic's attitude to Northern Ireland (where I think he is completely right to say that the South accepted Partition in 1926 and is still not seriously contemplating any other arrangement); and chapter five on the arts and literature. It's tremendously well written, and although some might feel that the critique of Charles Haughey is a bit over the top, the fact is that Haughey himself was well over the top. (Younger readers may need reminding that in the summer of 1982, during Haughey's first government, a nationwide hunt for a man who had killed two people in broad daylight with no apparent motive ended with the murderer's arrest in an apartment belonging to the Attorney-General; not Haughey's own fault, of course, but somehow symbolic of the times.)

Even though the book was out of date within a year of publication, it's a good encapsulation of the era. You can get it here.

On to 2012 books: the next on each pile are One of the 28th, by G.A. Henty (non-genre fiction, and also most popular unread book from 2012), Western Sahara: War, Nationalism and Conflict Irresolution, by Stephen Zunes (non-fiction), She Was Good - She Was Funny and My Morning Glory, by David Marusek (shortest) and Being Human: Bad Blood, by James Goss (SF). I think it will take me longer to clear the 2012 stack than the 2011 stack. 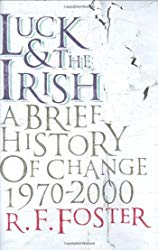