Second paragraph of the third chapter:

The Greymount family having planted themselves in the land, faithful to the policy of the founder, avoided the public gaze during the troubled period that followed the reformation; and even during the more orderly reign of Elizabeth, rather sought their increase in alliances than in court favour. But at the commencement of the seventeenth century, their abbey lands infinitely advanced in value, and their rental swollen by the prudent accumulation of more than seventy years, a Greymount, who was then a county member, was elevated to the peerage as Baron Marney. The heralds furnished his pedigree, and assured the world that although the exalted rank and extensive possessions enjoyed at present by the Greymounts, had their origin immediately in great territorial revolutions of a recent reign, it was not for a moment to be supposed, that the remote ancestors of the Ecclesiastical Commissioner of 1530 were by any means obscure. On the contrary, it appeared that they were both Norman and baronial, their real name Egremont, which, in their patent of peerage the family now resumed.

This is one of the many novels of Benjamin Disraeli (1804-1881), published in 1845, two years before he was elected to Parliament, seven years before he became Chancellor of the Exchequer for the first time and 23 years before the first of his two terms as Prime Minister of the UK. The only other British prime minister that I know published any novels was Churchill; I am fairly sure that the combined tally of all the others must be rather less than Disraeli's 16 or so.

The political sentiments of the novel are very interesting, and completely worn on its sleeve. Since the revolution of 1690, Britain has been run by the corrupt Whigs and their successors, out only to enrich themselves. The ancient and noble aristocrats, and the poor working classes, have both been exploited by the nouveaux riches and it's jolly well time that they got their act together. The working respectable poor live in horrible conditions, exploited by the Whigs and their own local bigwigs. The Catholic church (rather to my surprise) is a strong potential unifying factor, partly because the Whigs hate it but mainly just because. Egremont, noble both in blood and spirit, dares to openly state in Parliament that maybe the Chartists have a point and pays a social price. Sybil, whose father is a leader of the misguided but well-intentioned Chartists, orbits around Egremont and then it turns out - spoiler! - that she too has noble blood as well as noble sentiments. The establishment defeats the Chartists; yet nothing can ever be the same again.

The characters are paper-thin, but there's nice interplay within Egremont's own family (his stuck-up elder brother, his manipulative mother) and the political fixers Tadpole and Taper are quite good fun - as is Mr Hatton, fixer of family trees. I was also surprised by the number of memorable one-liners:

On Ireland in the eighteenth century: “to govern Ireland was only to apportion the public plunder to a corrupt senate.”

About an MP with a bee in his bonnet about foreign policy: “he had only one idea, and that was wrong.”

An old-fashioned lord harumphs: “pretending that people can be better off than they are, is radicalism and nothing else.”

Advice to a trainee lobbyist: “be ‘frank and explicit;’ that is the right line to take when you wish to conceal your own mind and to confuse the minds of others.”

Most surprisingly, on page 415: “Resistance is useless!” (Had Douglas Adams read this?)

Not everything stands the passage of time. “Slowly delivering himself of an ejaculation, Egremont leant back in his chair.” Errrr....

I picked this up (after a long time) mainly as a result of F.R. Leavis' recommendation in The Great Tradition. My main conclusion is that I wonder what he was on, recommending this ahead of most other novels of the nineteenth century? It's entertaining for a glimpse of the political atmosphere of 1845 (with the glaring absence of Ireland), but it really isn't Great Literature. You can get it here. 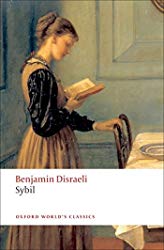