As previously discussed, this year's Worldcon administered (1, 2) and awarded 11 Retro Hugo Awards to honour the sf that fans might have honoured if there had been a Worldcon and Hugos in 1944. 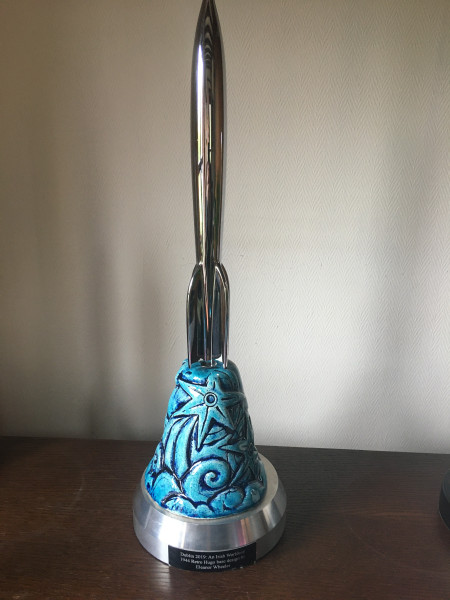 We did our best to identify copyright holders during the nomination process, but it was not easy, and (as noted previously) only one author's estate authorised us to use their material for a Retro Hugo voter packet (I will reveal that it was Fritz Leiber), so we did not proceed with that.

I'm glad to say that we did have a few designated acceptors in the room on the night. Apart from those noted below, Betsy Wollheim was on hand in case her father Donald won (unfortunately he lost in all three categories where he was nominated); June and Naomi Rosenblum were there for their father-in-law/grandfather J. Michael Rosenblum; Stephanie Breijo was there for her great-grandfather Oscar J. Friend; and Harper Collins sent a rep for C.S. Lewis. So, for 66 finalists, we had acceptors on hand for 10. Future Worldcons might like to bear that in mind when planning whether or not to run Retro Hugo Awards.

This is what happened with the trophies, in increasing order of the difficulty we had in dealing with them.

The agents for Leiber's estate, Richard Curtis, designated Patrick Nielsen Hayden to accept the trophy at the ceremony, and we shipped it to Richard Curtis's office.

Jason Aukerman of the Center for Ray Bradbury Studies at Indiana University attended the ceremony and accepted the trophy; we shipped it to him at the Center.

Campbell's grandson John Hammond attended the ceremony and accepted the trophy; we shipped it to him, but it was mistakenly delivered to Richard Curtis due to a label mix-up (for which I must take responsibility); Richard Curtis kindly sent it on to the correct destination.

We contacted the office of the Succession Saint Exupéry-d’Agay in Paris, and they agreed to accept the trophy, so we shipped it to them.

I managed to track down his daughter in Florida, and we sent the trophy to her. She had not yet been born in 1945.

After some digging it turns out that his literary estate is managed by Curtis Brown, so we shipped the trophy to them. They also manage the literary estate of Ursula K. Le Guin, so uniquely received both a 2019 trophy and a 1944 Retro trophy.

8) Best Novelette: "Mimsy Were the Borogoves", by Henry Kuttner and C.L. Moore

I managed to track down Moore's stepdaughter in California, and we sent the trophy to her. She was already an adult when her father married C.L. Moore in 1963.

We had had good connections with DC's New York publicists; it took a bit longer to get the right contact person in DC's actual HQ in Cailfornia, but we got there in the end and the trophy will be shipped to them as soon as we have corrected an unfortunate spelling error on the plaque. I slightly regret that we did not try to track down the family of William Moulton Marston; he and his wife had two children and he fathered another two with their partner, and there surely must be descendants still around. But our existing contact with DC, who had been pretty proactive about reaching out to us, was a bird in the hand.

Even though Universal won a 2019 Hugo for The Good Place, we could not get a response from them on the Retro Hugos. Eventually I tracked down Curt Siodmak's family, and the trophy will be sent to his 85-year-old son in California.

Again, there was no response from Fox despite trying to reach them by various means. We also tried to reach the Lubitsch family through several channels, but again heard nothing back. Finally we did get a response from Samson Raphaelson's family, and the award will be shipped to his son (who is 91) in Chicago.

All of this was quite a lot of effort. Again, future Worldcons might like to bear that in mind when planning whether or not to run Retro Hugo Awards.
Collapse