The James Tiptree Jr Award, "encouraging the exploration & expansion of gender", has announced that it is changing its name to the Otherwise Award, based on feedback received after the similar decision of Dell Magazines to change the John W. Campbell Award to the Astounding Award (also in the context of the 2015 decision a couple of years ago to redesign the World Fantasy Award so that it no longer looked like H.P. Lovecraft). It's their decision, of course; I think it is regrettable.

I understand the hurt and discomfort felt by disabled people who felt that it was wrong to commemorate a carer who killed the person that they were caring for. But first, it's not completely clear that that is a fair interpretation of what happened in the case of the Sheldon household; and second, Alice Sheldon never urged anyone else to kill their disabled spouse or themselves, whether under her own name or under the Tiptree pseudonym. In fact she did her best to maintain a sharp distinction between the private life of Alice Sheldon and the public literary identity of James Tiptree Jr. The award was the Tiptree Award, not the Sheldon Award.

In contrast, John W. Campbell Jr used his editorial platform to push his own racist political agenda under his own name. H.P. Lovecraft's stories, also published under his own name, include massive bigotry against immigrants. (And in his letters he made clear what he thought of the Irish.) For me that's a crucial difference.

This isn't a question of censorship; people are free to buy and read and discuss the works of Lovecraft, Campbell and Tiptree. It's a question of who we commemorate and how. The administrators of the Tiptree Award have ended up in a different place to where I think I would have done; it is, of course, their right to do so, just as it is my right to pass comment.

This controversy ties in also to the discussion about the award of the Nobel Prize last week to Peter Handke, who is an apologist for the regime of Slobodan Milošević and for the genocide committed under Milošević's watch. I had some pushback on Facebook yesterday for reposting a piece by Edi Rama, Albania's prime minister, regretting this decision in the strongest terms. In brief, I think that this was a very bad decision.

It is ridiculous to assert that the Nobel Prize for Literature is - or should be - seen as a pure literary assessment. Quite apart from the commonplace truth that the political context of the day informs all such decisions anyway, the Swedish Academy has often made blatantly political awards. Is there really anyone who can seriously assert that the most worthy writer of 1953 who did not already have a Nobel Prize was Winston Churchill? Never mind 1974, when the Academy decided to award the prize to two of its own members who were unknown outside Sweden. (And the Academy's recent internal travails have been very well chronicled.) So it is entirely legitimate for a political decision to be criticised on political grounds. Anyway, this is a case where Handke's political views cannot be separated from his art; they inform each other.

Again, this is not about censorship; it's about whose name goes on a list created by a political process, and who gets a million dollars in prize money.

As it happens, I've just finished reading the Tiptree winners for 1997, The Sparrow, by Mary Doria Russell, and "Mountain Ways", by Ursula K. Le Guin. The second paragraph of the third chapter of The Sparrow is:

Sometime during the night, a delivery van had provided the last little bit of weight and vibration that could be withstood by a nineteenth-century street paved over a medieval bedroom constructed from the walls of a dry Roman cistern, and the whole crazy hollow thing collapsed. The road crew managed to extricate the van but hadn't gotten around to putting up barriers around the hole. John, hurrying as usual, almost walked right into it. Only the odd echo from his footsteps warned him that something wasn't right and he slowed down, his foot in the air, stopping just short of a historically interesting broken neck. This was the kind of thing that kept him constantly on edge in Rome but that he made comical in his messages home. His entire experience in this city sounded better than it lived.

I read The Sparrow way back at the start of the century, and like many others I was blown away by it. It is one of only two novels to have won the Tiptree, BSFA and Clarke Awards (the other being Air, by Geoff Ryman). It was a little jarring to re-read it and realise that the parts of the book set earliest in time, when astronomers in Puerto Rico (and elsewhere) detect signals from an alien planet, are actually set in early and mid 2019, in a future where Turkey has collapsed into bloody anarchy but humanity has mastered the technology of asteroid mining. The book is told in double flashback, the core narrative being the preparation of an interstellar mission by the Jesuits, framed as the account of the lone survivor of the mission, a Puerto Rican Jesuit who witnessed the horrible death of the rest of his team and was then subjected to horrible abuse before the next mission rescued him.

Coming back to it now, almost twenty years on, the book's flaws are more apparent (and weirdly they became more apparent with the publication of the sequel, Children of God, which somehow failed to develop the success of The Sparrow). The physics of interstellar spaceflight is pretty implausible, and the grim abuse to which the protagonist is subjected seems over the top. On the other hand, the book's earnest exploration of faith and religion, and a clash between two world systems of intelligent beings that are not ready for each other, still seems very timely; and the characters in general are vivid, memorable and believable. I would still rate it as a classic.

The Sparrow won the Tiptree Award for 1997 jointly with "Mountain Ways", a novelette by Ursula Le Guin. A very long "short List" was also published, consisting of another five novels and another five short stories; also published was an even longer "long list", including another 28 novels and 17 short stories! Angela Carter was also given a special award by the Tiptree jury. Full details here. That was the year that the Hugo went to Blue Mars by Kim Stanley Robinson, and the Nebula to Slow River by Nicola Griffith. For the "other" John W. Campbell Award, The Sparrow came third, Blue Mars second and Fairyland by Paul J. McAuley won (it had also won the Clarke Award the previous year).

It was not until the following year that The Sparrow was published in the UK, so it won the BSFA Best Novel Award for 1997 (awarded 1998) and the 1998 Arthur C. Clarke Award. The other shortlisted novels in each case were completely different. BSFA voters had the alternatives of Earthquake Weather, by Tim Powers; Jack Faust, by Michael Swanwick; Signs of Life, by M. John Harrison; and A Son of the Rock, by Jack Deighton. The Clarke judges also chose Days, by James Lovegrove; The Family Tree, by Sheri S. Tepper; Glimmering, by Elizabeth Hand; Nymphomation, by Jeff Noon; and Titan, by Stephen Baxter. I have only read one other in each list, Jack Faust and The Family Tree, and The Sparrow is definitely better than either.

The second to fifth paragraphs of the third section of "Mountain Ways", by Ursula Le Guin:

“What is it? what is it, my dear love?”
“You’ll go away. You’re going to go away!”
“But not now—not soon—”
“You can’t stay here. You have a calling. A resp—” the word broken by a gasp and sob—“responsibility to your school, to your work, and I can’t keep you. I can’t give you the farm. I haven’t anything to give you, anything at all!”

I had not read "Mountain Ways" before - it is in the Birthday of the World collection, but also available online. It's a fascinating tale of a society where the standard marriage, endorsed by religious custom and practice, includes two men and two women, with sex forbidden between two of the potential opposite-sex pairings, but expected between the other two opposite-sex pairings and also between the same-sex pairings. I have whined a bit about some of Le Guin's work that she sets up interesting societies but doesn't often look at those who do not fit in those societies' rules. In this case, she has two women deeply in love with each other, one of whom fills a vacancy in the other's four-way marriage by pretending to be a man. For such a complex idea, it's very economically worked out, yet with great emotional depth. I feel that the Tiptree jury made two very good calls that year (I am not familiar enough with the work of Angela Carter to say whether it was three out of three).

"Mountain Ways" was also on the 1997 Hugo final ballot for Best Novelette; it came third, beaten by Bruce Sterling's "Bicycle Repairman", which won, and "The Land of Nod" by Mike Resnick. Fourth place went to "Beauty and the Opéra or The Phantom Beast", by Suzy McKee Charnas, and fifth to "Age of Aquarius" by William Barton. The Nebula in that category went to “Lifeboat on a Burning Sea”, by Bruce Holland Rogers; unusually there was not a single shared finalist between the two ballots. The other short fiction categories went to “Blood of the Dragon”, by George R. R. Martin (Hugo Novella); “The Soul Selects Her Own Society: Invasion and Repulsion: A Chronological Reinterpretation of Two of Emily Dickinson's Poems: A Wellsian Perspective”, by Connie Willis (Hugo Short Story); “Da Vinci Rising”, by Jack Dann (Nebula Novella) and “A Birthday”, by Esther M. Friesner.

Next in this sequence of reviews will be The Calcutta Chromosome by Amitav Ghosh, which won the Clarke Award in the year that The Sparrow won the Tiptree.

You can get The Sparrow here, and read "Mountain Ways" here. 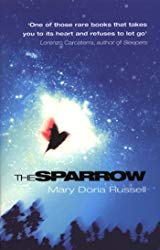