The 1965 single-episode Doctor Who story Mission to the Unknown is unique in a number of ways. It is the only single-episode story of Old Who. It is the only episode of TV Doctor Who ever in which none of the then current TARDIS crew (then William Hartnell as the Doctor, Peter Purves as Steven, and Maureen O'Sullivan as Vicki) actually appears, though William Hartnell does get credited as the Doctor. Less unusually, it is one of the episodes that was wiped from the BBC archives; it was never shown abroad, so there is little chance of an copy appearing in some forgotten store in Nigeria or Cyprus, and no footage at all survives (which is true of only two other stories, Marco Polo and The Massacre).

I'd previously listened to the BBC release of the audio with Peter Purves narrating, and also watched the Loose Cannon reconstruction (the original sound track with still photos and a few new bits of animation), so I was familiar with how it sounded. The University of Central Lancashire have now done their best to recreate the original broadcast, shot for shot. It was launched last Wednesday, 54 years to the minute after Mission to the Unknown was first broadcast. Well worth a look, book-ended with words from Edward de Souza, who played Marc Cory, the lead role, in 1965.


My conclusion is that this is a very interesting experiment that probably succeeds as a didactic exercise but maybe doesn't quite come off quite as well as the lost original may have done. The point that jumped out at me is that the 2019 actors are much younger - Marco Simioni, in the lead role, graduated last year so must be about 22; Edward de Souza was 33 in 1965 (he is 87 now). Dan Gilligan, playing Lowery, the second astronaut, is a year older than Marc Simioni; Jeremy Young, who played Lowery in 1965, is two years younger than Edward de Souza. (He also played Kal the caveman in the very first Doctor Who story, An Unearthly Child, and was married to Kate O'Mara.) So the relative ages are a bit jarring.

It is also notable that the actors of 1965 had developed an instinct of how to stay in shot in a small camera field on a small set. The 2019 actors start off OK but get a bit relaxed towards the end and drift off screen a bit. And the climax of the episode, Cory's final desperate fumbling with the crucial tape recording before the Daleks exterminate him looked a bit under-rehearsed. It's a labour of love, rather than great art.

My preference is still for the Peter Purves audio narration, which inevitably doesn't show but does tell, with Purves' sympathetic tones explaining what was going on onscreen.

In addition to the Loose Cannon animation, which also features Edward de Souza at a sprightly 68, I've found a three-part animation starting here which I haven't yet watched in full; it seems rather adventurously colourised.

I also found a 2010 graphic novel version of the entire story of Mission to the Unknown and the Daleks Master Plan, produced for Children in Need by Richard Lundeen. It's a tremendously loyal piece of work - difficult to get hold of, but worth the effort. 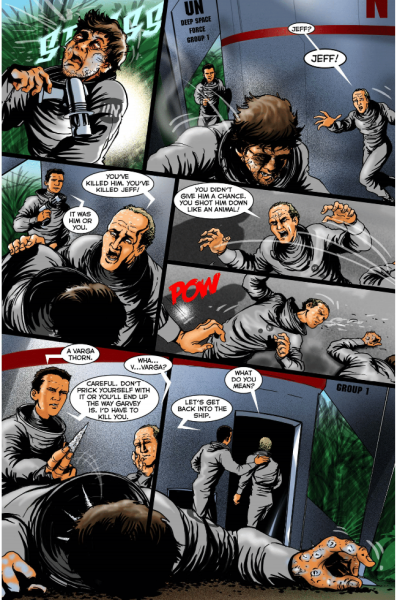 Anyway, it's great to see Old Who still provoking creativity, and perpetually being retold.
Collapse