In March 1956, a meeting took place in Belfast which resulted in the setting up of a new autonomous Ulster Liberal Association for Northern Ireland — later renamed The Ulster Liberal Party. The first chairman of the party was Albert McElroy. Albert was born in Scotland in 1915 to parents originally from Ulster. When he was 15, his family moved to Northern Ireland. He attended Trinity College Dublin and served in the British Army during the Second World War. He was ordained in 1954 as a minister of the Non-Subscribing Presbyterian Church of Ireland, which is Unitarian in tendency. He was its Moderator from 1967 to 1969. Originally McElroy had been a socialist, and stood for the Northern Ireland Labour Party in the 1945 Northern Irish and 1950 and 1951 UK general elections. Gradually, however his political opinions shifted towards liberalism. While accepting that Northern Ireland would remain British until the majority of its people decided otherwise, he himself believed that Ireland would one day be reunited and was proud of the 'Radical and Liberal tradition' of the Ulster Presbyterians and their role in the United Irishmen of the 1790s and America's independence struggle. He was also proud of the Liberal Party's support for Irish Home Rule. McElroy's ambition was to offer the voters of Northern Ireland an alternative to the tribal politics of Unionism and Nationalism.

I never had the privilege of meeting Sheelagh Murnaghan, though I had the melancholy duty of issuing a press release when she died in 1993, and one of her (many) cousins is an old family friend. From 1961 to 1969 she was the only member of the Northern Ireland Parliament at Stormont elected for the Liberal Party. This short book (97 pages for the main text) looks at her life and achievements.

I was aware of the main details. She captained the Irish Women's Hockey team in the 1950s. She was the first (and for several years the only) woman barrister in Northern Ireland. She won a by-election for the rather odd four-seat Queen's University constituency in 1961, and held hit at the next two general elections (safely in on the first count in 1962, uncontested in 1965) before the constituency was abolished in the last election for the Northern Ireland Parliament in 1969. In her eight years in Stormont, she four times introduced a Human Rights Bill, which would have created structures for human rights accountability in Northern Ireland. The Unionist government were not interested, arguing that there was no problem in the first place, that Nationalists were discriminating just as badly in the second place, and finally that the proposed remedies could not be effective. (There are still some defenders of the old Stormont who will argue the first two of these points, without noticing that they are contradictory.) They thus rejected a massive opportunity to create confidence and draw the sting from minority grievances. Most of the reforms that the Ulster Liberal Party supported were enforced by the mid-70s, but by then it was far too late.

I had not known that in 1983, as chair of an industrial tribunal, Sheelagh Murnaghan handed down the first judgement in the UK or Ireland finding an employer guilty of allowing sexual harassment in the workplace, the important case of Mortiboys v Crescent Garage Ltd. The former Crescent Garage is still there, but rebranded, on Orangefield Crescent (I suspect several owners on from 1983). I wonder what happened to Ms Mortiboys in the end? I hope she found something better to do with her life (it could hardly have been much worse).

I was briefly the chair of the Northern Ireland local branch of the Liberal Democrats, the heir to the Ulster Liberal Party of which Sheelagh Murnaghan was the senior elected official (its leader however was the Non-Subscribing Presbyterian minister Albert McElroy). In my day it was basically a group of enthusiasts who met every year or so to reconfirm the strategic decision not to contest elections against the Alliance Party (I have no idea what the situation is now for Lib Dem members in Northern Ireland). The leading veteran at the time was Berkley Farr, who contributed a lot to this little book. The other person whose work is drawn on (and perhaps should have got a little more credit) is Constance Rynder, a Florida history professor who sadly died in 2017 but did a lot of research on women in Stormont in general but also on Sheelagh Murnaghan in particular.

Sheelagh Murnaghan never married and is not known to have had a relationship other than her devotion to her dogs. I don't think that one can read any more into this. I did attend her funeral, which was taken by Alec Reid, and she clearly left many friends and fond memories behind her. This is a nice little book and you can get it here. 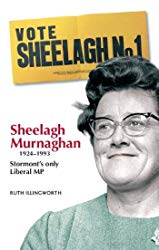