Stacy didn’t answer when I called the house. I left a quick message asking her to come by and feed Spike and the cats until I got back. I glossed over how long my absence was likely to be. The last thing I needed was for her to start calling Sylvester, demanding to know whether he was trying to get me killed. I couldn’t blame her for reacting that way. After all, the last time I went on a job for him, I got turned into a fish and spent fourteen years swimming around a pond in Golden Gate Park. Still. That sort of thing doesn’t happen twice, and I didn’t want her to worry.

This is the second volume of McGuire's popular October Daye series, collectively twice on the final ballot for the Hugo Awards (coincidentally in the two years in which I was the administrator). I read the eighth volume in 2017 and the first volume this year as I prepared my ballot, and I have to be honest, I ranked the series at the bottom of my ballot on both occasions. (Voters also ranked it 6th in 2017, but 4th in 2019.)

I completely bounced off the core concept of a Gaelic otherworld conveniently located in the American West, with no visible representation from other less foreign supernatural traditions.

That may have been true of the ninth volume, but this one does have a few non-Celtic entities, a Japanese kitsune and a Geek dryad (who however has gone cyber). Still, I found it very jarring. The fact is that San Francisco has been a major European settlement for less than 200 years; how then does it mysteriously have a parallel world of ancient Celtic entities full of European chivalric traditions sitting alongside it? And what has happened to the supernatural beings of the more indigenous traditions? On top of that, the characters need to infodump to us about the rules of their parallel society; and I have to say that when the murderer was revealed, it was someone who I had barely noticed in the plot earlier.

Obviously a lot of people love this, and that's fine. But it's a bit annoying to have the Celtic heritage applied as if it were a universal; for us Celtic types (and I think for Europeans generally), part of the charm of the old myths is precisely that they are tied to particular places and cultures, not claiming to be a universal experience.

This was the top unread sf book on my pile. If you want, you can get it here. Next is The Invisible Man, by H.G. Wells. 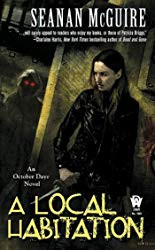