A few miles south of Aksum we climbed a long, rocky ridge, dotted with round, green bushes, and on the crest I was glad that I had walked ahead and could enjoy this moment alone. Below me —like a vast bowl brimming with beauty — lay a broad, sunny valley, lined with golden grasses, and from its floor rose a low hill, crowned by a tree-surrounded church, and faintly, across the silence, came the solemn chanting of many priests — a sound so sweet in its remoteness that it seemed to belong to the soul of the mountains rather than to the rituals of man.

I've never actually met Dervla Murphy, but I worked with her in 1990-91 when she was one of the judges of the Christopher Ewart-Biggs Prize and I was the prize's administrator (my career of literary awards did not start with the Hugos or the Clarke Award). I knew of course Full Tilt, her memoir of travelling overland to India by bicycle in 1963, her autobiography, Wheels Within Wheels, and her account of mid-1970s Northern Ireland, A Place Apart. Here she visits Ethiopia in 1966-7, walking most of the way from the Red Sea to Addis Ababa with a helpful mule who she christens Jock.

As an Irish citizen, she gets a great deal of help from the British Consul in Asmara (then of course a provincial capital, now the capital of the independent state of Eritrea) and the British Ambassador in Addis Ababa, both of them named Bromley (the ambassador had a dreadful tragedy in his past, but if Murphy knew about it, she did not mention it); and also dramatically from the eldest granddaughter of the emperor, whose husband (also of royal blood) was the governor of Tigray.

Ethiopia is a hugely important country that we should all pay more attention to. Its population is 112 million, the 12th highest in the world, and the annual rate of economic growth is between 7% and 11% (from the last decade). I changed planes there a few times in South Sudan days, and in April 2010 stayed in the city itself for three days due to connection problems with Juba. I found it fascinating to see a rapidly expanding and increasingly outward-looking society, with shopfronts advertising their wares in both Amharic and English (and this in a country that the Brtish never even tried to colonise). In those days, of course, the population was only 90 million, 20% less than now.

Dervla Murphy was there when Ethiopia's population was only 25 million (26 million if you count Eritrea) and the world as a whole was a bigger place. Even so, foreigners are not at all unknown - she hooks up with some English mountaineers and climbs Ethiopia's two highest peaks (both of which are apparently very strollable). But she deliberately goes through countryside and wild territory which are a bit more off the beaten track, sleeping in tukuls if villagers are hospitable, in the wild otherwise. She gets robbed three times - in one case, she helps the police lead a successful expedition to catch the thieves, but the other two culprits get away. More humorously, it turns out that her surname has odd local resonances - መርፍእ ["merifi’i"] in Tigrinya and መርፌ ["merifē"] in Amharic both mean "needle"/"injection".

Apart from thieves, the two sets of people she has most disdain for are the Church and international aid workers. She sees ancient heritage being ruined or sold off by its supposed guardians, and has some unpleasant experiences in monasteries. (Also the nastiest of the thieves is in fact a priest.) At the end of the book she is dismayed by the aid worker scene in Addis Ababa, feeling a complete disconnect with the realities of the countryside that she had walked through. It's a vivid portrait of a country at a time of transition. You can get it here.

Prince Mengesha, whose hospitality she enjoyed in Makalle/Mekelle, is still alive aged 91. His wife, Princess Aida Desta, died in 2013 aged 85. During the Derg regime, from 1974 to 1988, she was imprisoned in a small room in a prison in Addis Ababa. The prison was closed in 2004 and demolished in 2007; the headquarters of the African Union, where I spent some time back in 2010, was built on its site, funded by the Chinese. 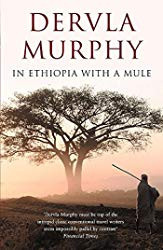