Second paragraph of third chapter (it's a long one, brace yourself):

Ireland's first cycling club, the Amateur Velocipede Club, was organised in Dublin by Dr Austin Meldon in 1869. Its first two meeting places were Meldon's house at 10 Weston Row and the house of a pawnbroker, Edward A. Hayden, at 43 Clarendon Street, before a permanent club premises were found at the Exhibition Palace Annexe at Earlsfort Terrace on 26 November 1869. The club met on Wednesday evenings, when as many as seventy members often assembled for practice and also to learn various cycling tricks. Meldon's club — one of the first in the world — petered out in 1873, due to the premises having to be given up and the club's inability to find suitable alternative accommodation, as well as the death of some of the principal members.2 Another Dublin club, the Earlsfort Terrace Machinery Court Club (which was either the second or third to be established in Ireland) was formed in 1870,3 possibly connected with Neal's riding school in the Exhibition Palace building, but it does not appear to have lasted as long as Meldon's club. By 1875 two other clubs existed in Dublin — these were the Dublin Amateur Bicycle Club, the older of the two, which had its headquarters in Dublin city, and the County Dublin Bicycle Club, with its headquarters in Kingstown. According to one source, the former club 'had little life in it' by 1875, whereas the latter club (whose members included Austin Meldon's brother Louis, a solicitor) engaged in such pursuits as paper chases to Bray, Little Bray and Enniskerry, racing, playing the dangerous game of 'cross tig' on the jetty at Kingstown, and conducting club runs to destinations such as Glen of the Downs, Roundwood and the Seven Churches, and club tours to counties Wicklow, Wexford, Waterford, Cork and Kerry.4 There is no evidence that either of these two clubs was in existence by the early 1880s. Dublin acquired a third bicycle club in November 1875, following an acrimonious split in the County Dublin Bicycle Club. Some of the club members lived in Dublin city and resented what they considered the cliquey behaviour of the Kingstown members, which they believed meant that scarcely anybody but Kingstown residents could get elected to club membership, and there was also 'considerable jealousy' between the Dublin and Kingstown men. Following the committee's refusal on 2 November to move the club's headquarters from Kingstown to Dublin city, Louis Meldon and a prominent racing cyclist, William Persse Blood — the son of William Bindon Blood — decided on the following day to form a club of their own. The new club — the Irish Champion Bicycle Club — whose first general meeting was on 18 November 1875, had committee rooms over Lawrence's on Grafton Street at first, but later changed its headquarters to a premises at Bachelor's Walk.5 It was instrumental in organising the first Irish cycling championship races in June 1876, which function was taken over in 1882 by the Irish Bicycling Association (whose name was changed to the Irish Cyclists' Association in 1884). A fourth Dublin club, the Dublin University Bicycle Club, was formed in the winter of 1877, with R. Hassard, a well-known racing cyclist, as its first captain,6 while the Phoenix Cycling Club was established in the capital in 1878.7 The latter was inaugurated by eight cyclists who met at the Phoenix monument in the Phoenix Park in September 1878. One of these suggested the formation of a club for holding fixed runs in the evenings, which suggestion was accepted by the others present. By September 1881 the Phoenix club, with over fifty members, was the largest cycling club in Dublin.8
2 Thom's Irish Almanac and Official Directory of the United Kingdom of Great Britain and Ireland: for the Year 1869 (Dublin: Alexander Thom, 1869), p.1400; Irish Cyclist, 26 March 1890.
3 Irish Wheelman, 25 September 1894.
4 Irish Cyclist, 7 May 1890.
5 Icycles, December 1880; Irish Cyclist, 21 May 1890, 2 July 1890. William Bindon Blood was the club president; William Persse Blood was its secretary, and Louis Meldon, — a solicitor, and brother of Dr Austin Meldon — was its captain.
6 Irish Cyclist, 11 June 1890. For accounts of the Dublin University Bicycle Club and of cycling at Trinity College Dublin in the nineteenth century see Kenneth Bailey, A History of Trinity College Dublin 1892-1945 (Dublin:The University Press, 1947), pp 130-33, 164; Trevor West, 'Football, Athletics and Cycling: The Role of Trinity College, Dublin in the Evolution of Irish Sport' in Sarah Alyn Stacey (ed), Essays on Heroism in Sport in Ireland and France (Lewiston, Queenston and Lampeter: Edwin Mellen Press, 2003), pp 141-142.
7 Bicycling News, 20 September 1878.
8 Morning Mail, 14 September 1881.

This is a short but comprehensive book about the evolution of cycling from upper-middle-class fad to a mechanism to erode patriarchal and class oppression in late nineteenth-century Ireland. When bicycles first appeared on the island in the 1860s, they had no gears, solid wooden wheels rimmed with metal or rubber, and the pedals were attached directly to the axle of one of the wheels, usually the front. They were also expensive and therefore the province of the rich, or of the committed hobbyist. Brakes were also a later invention, and I must say my heart sank reading accounts of riders hurtling down steep hills unprotected; it is surprising that there were not more fatal accidents. 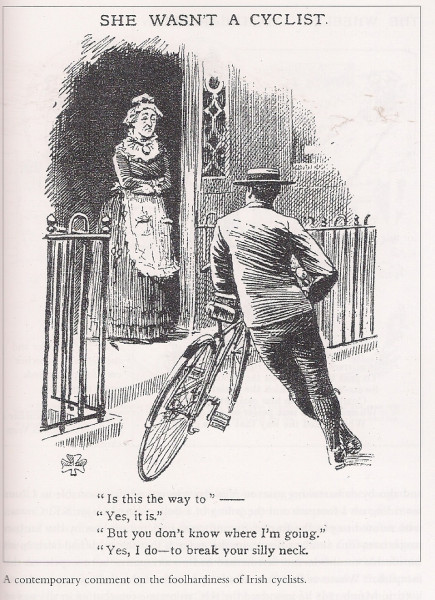 Source: The Jarvey, 15 November 1890
The introduction of chains (the "safety bicycle"), gears and brakes all helped, but the single most important technical innovation transforming bicycles from hobby to economic engine was one invented in Belfast. In 1887 John Boyd Dunlop, a veterinary surgeon originally from Scotland, had the idea of replacing the metal rim on his son's bicycle wheel with an inflated rubber tube. The rest is history, as early adopters in Belfast humiliated all opponents in cycle races and Harvey Du Cros, the President of the Irish Cyclists' Association, entered a business partnership with Dunlop to market the new product. Dunlop did not make a lot of money from his invention, but the company he and Du Cros founded still bears his name. Since 1988, roughly the centenary of his invention, he has appeared on the £10 bank notes issued by the Northern Bank and subsequently Danske Bank in Northern Ireland.

These technological innovations and mass production brought them within the reach of most people who might want one by the 1890s, and in particular they were socially and economically liberating for women, who could now travel independently (Griffin quite rightly has a whole chapter on this). Also whole new avenues of employment opened up exploiting the new technology, as is always the case. There was pushback from some quarters.

In 1895 the more conservative members of the hierarchy tabled a motion on the agenda for the Irish bishops' meeting in Maynooth, which criticised as undignified the growing use of bicycles by priests and seminarians... Archbishop William Walsh of Dublin, the primate of Ireland, was an avid cyclist and, aware that the anti-cycling proposal was one of the items up for discussion, he arrived at the meeting on his bicycle, having ridden it from Dublin — Walsh's telling action left 'little room for further discussion' on the matter! (pp. 72-73)

From Dublin to Maynooth is about 26 km, and the Archbishop was a fit 54-year-old, so he probably did it in about an hour and a half, as long as he was used to the long 3 km climb from Chapelizod to Palmerstown and the shorter sharp rise out of Leixlip.

The book is tremendously well researched and thoroughly illustrated with contemporary cartoons, advertisements, photgraphs and other material. It's a tremendous example of taking a niche subject, researching it thoroughly and presenting the results clearly. My only complaint, as so often with academic books, is GRRRRRR endnotes. Really, we have the technology to put relevant information at the bottom of the page where it is needed. Otherwise recommended, and you can get it here.

I was once a keen cyclist myself, and as a teenager toured the megalithic sites of western county Down by bike from the hub of Loughbrickland; one summer, some friends and I cycled around Donegal, starting the tour with an epic 125-km ride to Gortin, Co Tyrone (not helped by a 20 km detour around Portadown where we thought we could cross the Bann at Bannfoot). I am less ambitious now, and have twice cycled to Brussels in the last ten years (and once back). Having tried the new Uber electric bikes, I fear I have gone soft in my middle age and may get one of them. A friend of mine indulges in fixed-gear riding in London; I admire her energy and commitment to doing it the old-fashioned way!

This was the non-fiction book that had lingered longest unread on my shelves, and also the shoprtest unread book I had acquired in 2011. There is now only one unread 2011 acquisition on my shelves, Luck and the Irish by Roy Foster. 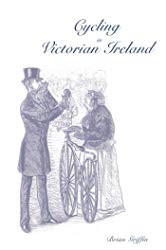