West Side Story won the Oscar for Best Motion Picture of 1960, and picked up another nine: Best Director (Robert Wise and Jerome Robbins), Best Supporting Actor (George Chakiris as Bernardo), Best Supporting Actress (Rita Moreno as Anita), Best Art Direction, Best Set Decoration (Color), Best Cinematography (Color), Best Costume Design (Color), Best Film Editing, Best Original Score and Best Sound; it lost out only in Best Screenplay Based on Material from Another Medium, to Judgement at Nuremberg. Jerome Robbins also won a special Academy Award, so you could count the total as eleven, level with Ben-Hur, Titanic and The Return of the King. 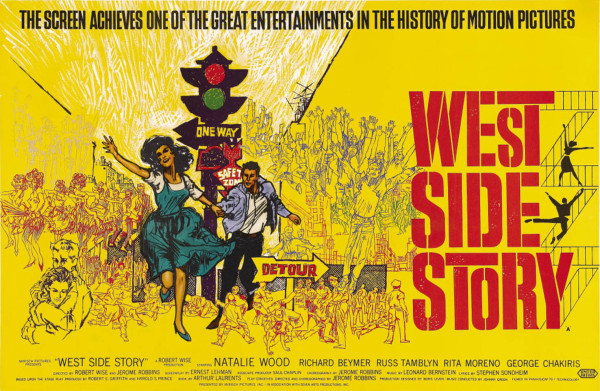 The other films that were nominated for Best Motion Picture were Fanny, The Guns of Navarone, The Hustler and Judgment at Nuremberg; I have seen none of them. West Side Story ranks top on one IMDB rating of 1961 films and fourth on the other, behind Breakfast at Tiffany's, 101 Dalmatians and Yojimbo. I have at least seen 101 Dalmatians; the other two films from that year that I know I have seen are Tintin and the Golden Fleece, and The Young Ones. That year's Hugo went to the second series of The Twilight Zone. IMHO West Side Story is the best of them. Here's a trailer (not a contemporary trailer, unfortunately, I couldn't find one):

This is a musical, the first Oscar-wining film based on a stage musical (we've had musicals in this series, and films based on stage plays, but this is the first to tick both boxes). I also note that of 34 Oscar winners so far, this is the tenth set in or around New York. (The nine others were The Broadway Melody, most of The Great Ziegfeld, You Can't Take It with You, Going My Way, The Lost Weekend, most of Gentleman's Agreement, most of All About Eve, On The Waterfront and The Apartment. But it will be another eight years until the next one, Midnight Cowboy, and four of the ones in between are set in England.)

As if you didn't know, it's based on the rivalry between two gangs in the Upper West Side of New York, one white (the Jets), the other Puerto Rican (the Sharks), with much of the plot taken from Romeo and Juliet including duels and balcony scene between Tony of the Jets and Maria, whose brother leads the Sharks; but what makes it justly famous is the music and dancing. In fact, I'm now going to talk quite a lot about the song "America", in which the Puerto Ricans discuss the ups and downs of living in America rather than back home, so here it is - just watch it before you go on to read the rest of this, and appreciate Robbins' spectacular choreography, and also the Oscar-winning performances of George Chakiris and Rita Moreno who lead the scene and Bernardo and his girlfriend Anita (Tony and Maria being elsewhere):

As so often, I'm going to start by talking about race. This is the thirty-fourth Oscar-winning film I have seen, twenty-six of which have been adaptations of other work, and the song "America" is the first case of commentary on race that has been deliberately made more incisive than the original version by the screenwriters. In the original stage version, it is sung by the Puerto Rican girls alone (the boys having left the scene), with Rosalia (in blue) the sole holdout for the view that life was better back home and the others trying to persuade her of America's merits (and winning the argument). In the film version, it's girls vs boys, with the girls (including Rosalia) advocating the good points of America and the Shark boys (again in blue) criticising the racism that they enounter as Puerto Ricans, and doing better in the argument than Rosalia does in the original version. Compare and contrast:
(The song also has some nostalgia for me because Roy Castle used it as the intro to the American secion of his TV show Record Breakers in the mid-70s.)

Having given the film version of West Side story a big plus mark for being more woke than the original stage show here (and note also that the police on both stage and screen are frank in their desire to see the Puerto Ricans go back home), it then has to be given two strong minuses for errors in the other direction. Firstly (and eerily relevant for Canadian politics right now) is that all of the "Puerto Ricans" are blacked up - including Rita Moreno, who actually is Puerto Rican. (She will be in next year's Steven Spielberg remake, playing the role of Tony's boss, the storekeeper. She will turn 88 this December.) Siblings Gus and Gina Trekonis appear on opposite sides, Gus in brownface as Indio, one of the Sharks, and Gina as Graziella, one of the Jet girls. (Both stayed in the entertainment industry, but neither in acting; Gus became a director, his credits including 22 episodes of Baywatch (he was also married to Goldie Hawn at one point), and Gina went into wardrobe and costume design.) 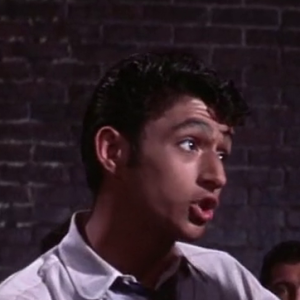 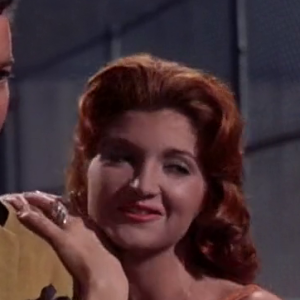 Also, the ethnic group that most famously inhabits the Upper West Side is practically invisible. If you squint, you can see half a dozen African Americans in the crowd scenes at the dance, but none of them gets to speak (or even sing).

It's a romance set between young people from two fairly conservative backgrounds. But Tony and Maria both get a lot more character development than Romeo or Juliet. Both of them actually have jobs, for one thing. And the women, though in the minority, certainly have agency.

It's also interesting that unlike in Romeo and Juliet, where the young people are continuing a feud started by their parents, West Side Story has introduced an element of generational conflict as well, with the older folks abent or mocked as in "Dear Officer Krupke":

Let's also note the character Anybodys, played by Susan Oakes, described in the script as a tomboy but who would certainly be coded genderqueer these days.

A couple of genre points. Of the two leading actors, Natalie Wood's fate is alas all too well known, but Richard Beymer looked familar to me; and then I realised that thirty years on, he was Ben Horne, the local oligarch in Twin Peaks. 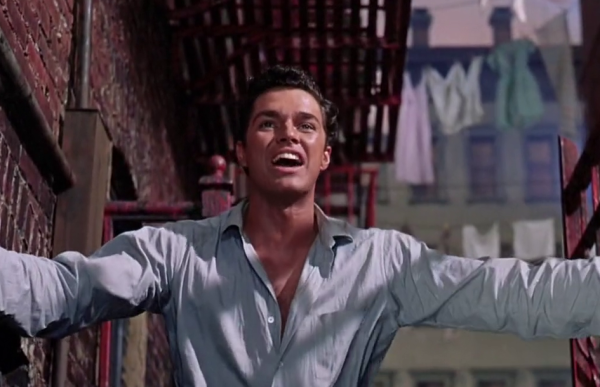 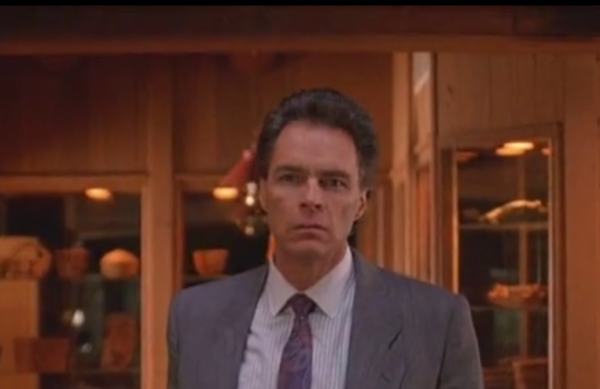 Glad Hand, the MC at the dance, is played by John Astin, who found fame a few years later as Gomez Addams in The Addams Family. (His adoptive son, Sean Astin, was Sam Gamgee in The Lord of the Rings.) 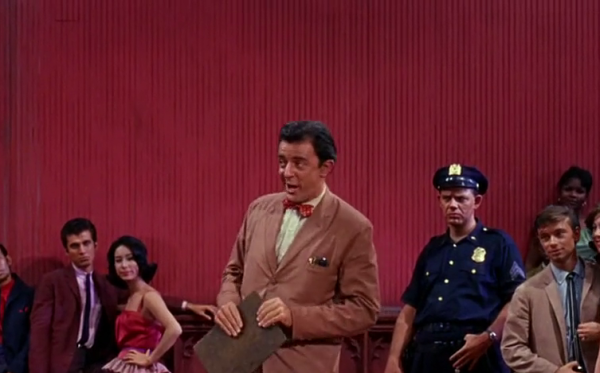 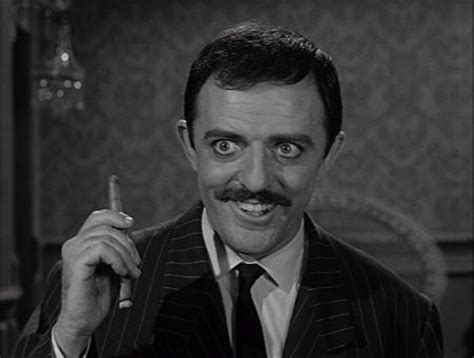 Anyway. What makes the film is the spectacular music and dancing. We've had Bernstein before (On the Waterfront), but this is just amazing. The most interesting musically is probably "Cool", three quarters of the way through (NB the Jets get more of the good dances):


But it's all good, starting with the opening:

On through the dance at the gym:

We've already covered "America", which separates "Maria" from "Tonight" (a wise change frmo the stage version in which the two big romantic songs were consecutive):

The Shark girls get a great number with "I Feel Pretty":

The "Tonight Quintet" clearly inspired a lot of similar scenes in musicals:

And "Somewhere" points to the tragic ending.

I enjoyed this a lot and am putting it right up in my top six, below Bridge on the River Kwai but above The Best Years of our Lives. You can get it here.

Next up, Lawrence of Arabia.