I recently discovered a Facebook group sharing old pictures of Finaghy, the Belfast suburb where I grew up. Two pictures caught my eye, of the same building, taken in the early twentieth century from the look of it. 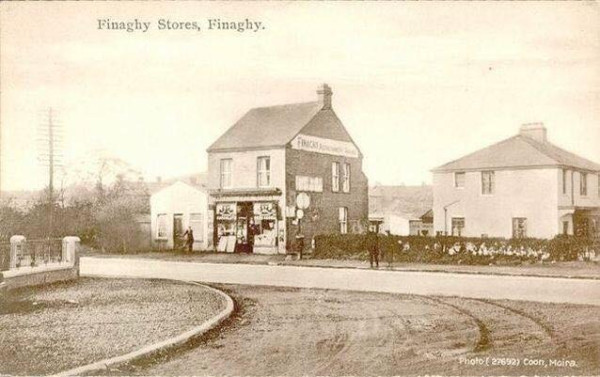 In the first picture, it is labelled “Finaghy Cash Stores” with advertisements for cocoa (Finaghy is unusual among Irish settlements for having no pubs, due to the landowner’s strong views about alcohol). I guess the woman in the doorway is the owner of the store, with a little girl looking at the camera in bemusement. Only fields are visible in the background. The photograph is not attributed, but I wonder of it is part of the Welch collection? (I’m not going to scroll through all 4115 of his photos to see if I can spot it.)

The second picture is clearly from a few years later, taken from further away by Alan Coon of Moira. There are a lot more buildings visible. Finaghy was developed as a suburb in the 1920s and 1930s, and I would put this at the midpoint of that period. Unfortunately we can’t read the signs on the store, apart from the word Finaghy.

I thought it was quite a striking building, and wondered if it is still there?

Delightfully, the answer is yes. Here are two pictures from Google Maps, taken from more or less the same vantage points as the early twentieth century photographs (here and here). 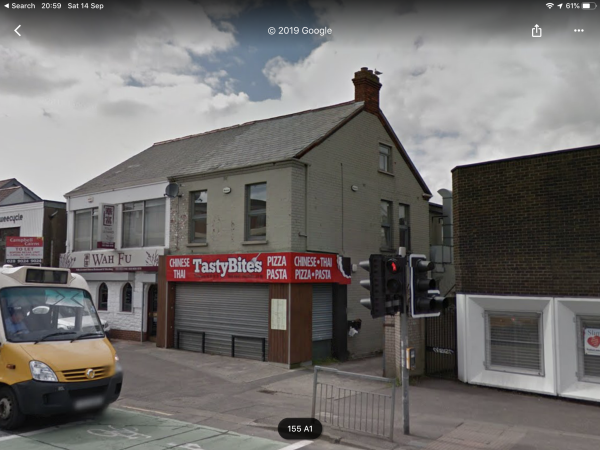 On the western corner of Finaghy crossroads, 155 Upper Lisburn Road, as it now is, has acquired a close neighbour at no. 157 - they even appear to share a roof - replacing the smaller building in the second of the older pictures, and I am sure that most passers-by don’t consider the possibility that one of the two buildings is much older than the other. I must have passed it thousands of times in my childhood, but I cannot remember now what shop was there in the 1970s and 1980s. Checking the online trail, I find that it was Brown’s, a tobacconist, in 1960, but most recently has been a variety of different take-away restaurants.

Incidentally the building to the right in the second of the older pictures seems to have been replaced by the more recent bank (now decommissioned and converted to offices). The bank’s address is 2-4 Finaghy Road North, which suggests that it replaced two semi-detached houses on the corner site.

The Ordnance Survey maps are not detailed enough as to time and date to be a lot of use, and seem to show the future 155 Upper Lisburn Road as a bit wider than it appears in the photographs. (Unless 157 Upper Lisburn Road had already been built, I guess.) Here’s the most recent map: 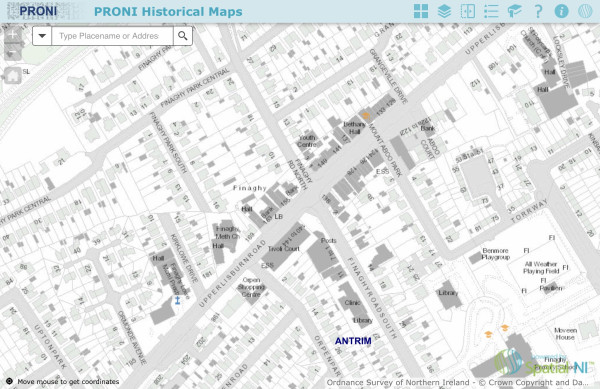 The older available maps are from early and mid twentieth century, and do show the change in development of the area. 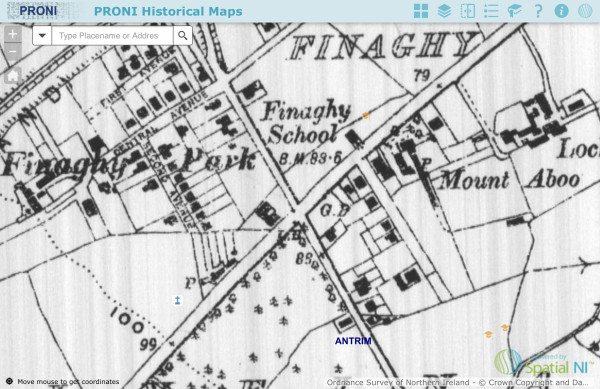 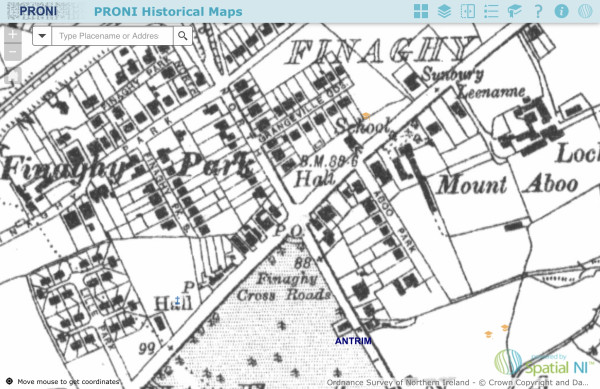 Again, it’s obvious if you know the area and think about it, but it’s interesting that the southern corner of the crossroads was the last to be developed. In the mid-century map it’s still a greenfield site; in my day, it had a cinema (excitingly bombed in the late 70s, as was the post office across the road), a branch of Stewarts supermarkets (now Iceland), and the first purpose-built National Health Service clinic in the United Kingdom.

Interesting that the schoolhouse to the east was much nearer the crossroads than the current Finaghy Primary School; it’s now 135B Upper Lisburn Road, most recently Joe’s Bistro.

Interesting also that Finaghy Park North, South and Central were originally called First Avenue, Second Avenue and Central Avenue. I think the developers must have wisely concluded that they could not convincingly channel the spirit of New York.
Collapse