There's a new novelisation out of the Fifth Doctor story Resurrection of the Daleks by Eric Saward, which prompted me to go back and rewatch the original 1984 story on which it was based, and also to reread the fan novelisation published some years ago by Paul Scoones.

I missed Resurrection of the Daleks when first broadcast. When I watched it in 2007, I wrote:

In keeping with my practice of watching the later Davros stories backwards (see Revelation of the Daleks, Remembrance of the Daleks), I tried the Fifth Doctor's only encounter with his chief foe, from 1984. Well, it did explain the plot line about there being two different factions of Daleks, which had passed me by completely. Apart from that the story makes little sense. It is memorable for lots of big name actors - Leslie Grantham in his first TV role, apparently - all getting shot (apparently this has the largest number of on-screen violent deaths of any Doctor Who story) and running around for no apparent reason. When Turlough reappears in the middle of it I was taken by surprise as I had forgotten he was in it. I did like Rodney Bewes' performance. (And Sneh Gupta.)

There's some dire Doctor/Davros dialogue (note alliteration) but some good Davison moments too, like when he remembers the previous companions and incarnations, and his reaction to Tegan's farewell (and she's been laid out horizontal for most of the story and so missed most of the gore). Basically, this is one for completists. (But if you're reading this, you probably are a completist.)

Resurrection of the Daleks is the first time we have seen the malignant pepperpots since Romana regenerated, four and a half years ago. It looks fantastic - tremendous moody shots of Docklands and studio sets, action scenes with much mayhem (the highest on-screen death toll of any Who story, I believe, making Tegan's desire to get the hell out entirely comprehensible), and decent performances from an extraordinary array of guest stars, Rodney Bewes, Rula Lenska, Chloe Ashcroft, the glowering Leslie Grantham in his first TV role, Terry Molloy doing Davros for the first time.

It's a shame therefore that the story doesn't make a lot of sense. Every time I think I understand what the various factions (human and Dalek) are up to, there is another twist and I lose track. Viruses? Assassinating the Time Lords? I give up. There are some good set-pieces - Rodney Bewes' character's redemption, the confrontation between two sets of Daleks in the middle of episode 2 - but some weak bits as well, including in particular the Doctor's rather contrived decision to execute Davros and his failure to then carry through this decision.

Coming back to it again, I found myself even more annoyed than previously at just how little sense the plot makes. It's never clear exactly what is going on, and it's difficult to care. I also find it difficult to forgive the inconsistent characterisation of the Fifth Doctor - not just with other stories, but within the same story. And Turlough's invisibility and Tegan's immobility are a peculiar approach to the regular cast. Rodney Bewes is indeed the standout guest performance, but again his behaviour is not really consistent with that of a Dalek agent. I do recommend TV Tropes' dissection of the story.

Having said all that, I can't agree with Eric Saward, who himself described Resurrection of the Daleks as "the worst Doctor Who story ever written". The Twin Dilemma, two stories later, is for my money by far the worst Doctor Who TV story. (See my write-ups here and here. There are several worse Who stories in other media.)

Thirty-five years on, Saward has produced an official novelisation of Resurrection of the Daleks. The second paragraph of the third chapter is:

In another part of the room, lounging in front of the deep space scanner, was Senior Ensign 'Baz' Seaton. Seeming to spend endless hours staring blankly at the machine before him, it was difficult to appreciate precisely what he was registering. To some of the crew he was considered one of the dimmest people aboard. That was until a recent computer glitch had mistakenly caused the crew's personnel files to be published. This revealed, much to some people's irritation, that Seaton not only had the highest IQ of the crew, but also had a PhD in astrophysics and another entitled 'Dark Matter contra the Time-Space Continuum'. To make things even worse, Seaton was also an inspired cook and his pop-up dinner parties were now famous. In spite of all this, the reasons for him being in such a lowly position aboard the prison ship remained a secret.

Just as The Twin Dilemma is my least favourite TV story, its novelisation is my least favourite novelisation of a TV story, though not in fact my least favourite book by Eric Saward. The new novelisation is not great, but it's not as bad as either of those. Saward has done his best to fill out the incidental characters with some background, particularly the crew of the battlecruiser (which is named the Vipod Mor and therefore should be identified with the ship in Saward's audio story Slipback). He still slips into trying to channel Douglas Adams a bit too often, his writing is surprisingly unpolished in places for someone of his track record, and the story itself remains a complete mess which he (perhaps wisely) doesn't attempt to untangle. I think it's still one for completists only.

I compared and contrasted it with the 2000 Paul Scoones unofficial novelisation, the second paragraph of whose third chapter is as follows:

Tegan scrambled across the floor to assist the stunned Turlough. ‘You all right?’ she asked him. He nodded groggily.

a decent effort, drawing in some of the background material invented by David Aaronovitch for his novelisation of Remembrance of the Daleks but otherwise sticking fairly closely to the story as broadcast, including the humungous body count.

I think I stand by that assessment; Scoones doesn't do a lot more than write what appeared on the screen, though he does do a bit more, and his writing style is confident and competent, without Saward's excesses or Saward's flaws. As a sample, here's the way the two treat the cliffhanger between the two episodes:
Saward's style is just that bit worse, isn't it? The repetition of "surprisingly" early on, dropping Stien's dramatic "No, Doctor" (the climax of the first of the two TV episodes), and the awkwardness of "a distraught Doctor", "jaded" and "wanton", not to mention a general jerkiness, are all pretty awful. On the other hand, he's taken the opportunity to rewrite it to make a bit more sense - the TV version (and Scoones' novelisation) has the Daleks threaten to exterminate the Doctor and then change their mind, which sits rather oddly with Stien describing them as "impulsive"; Saward makes them more consistent and also brings in his new character, the Alpha Dalek.

Anyway, as I think is clear, in my view it's all a bit of a mess. You can get the DVD of the original TV story here, Saward's novelisation here, and the Paul Scoones version here. 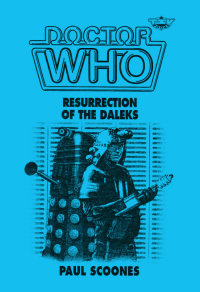