At the recent Worldcon, I was asked to moderate a panel on “Using SFF as sandboxes for ideas on politics and society“, with co-panellists Eyal Kless from Israel, Sam Hawke from Australia and Taiyo Fujii from Japan. It was quite an experience to run a discussion between participants with such varied backgrounds, and I am afraid that I did not keep notes from most of the discussion. Towards the end, though, I asked the panellists to share some sff that they felt explored political ideas in an interesting way, and these were the responses - not by any means an exhaustive list, just what occurred to four people (and an audience member) one afternoon.

Second paragraph of first letter from third month of correspondence with Fanny:

I would, if it was consistent with the duties now dwelling upon me, have been with you this morning, but I can not, I must forgo for a while that pleasure, that duty.

My second cousin once removed, Edward Wickersham “Wick” Hoffman, inherited from his mother a box which had originally contained bottles of Majorska Vodka. On closer investigation, he discovered that it contained a large number of family documents, which he has done us the great service of transcribing and publishing. In this first volume of four, he has collected the early correspondence of Samuel Morris Wickersham, Wick’s great-grandfather and my great-great-grandfather. Most of this dates from the years 1859-1860, when he was courting his future third wife, my great-great-grandmother Frances Wyatt Belt, and writing to her in Philadephia and Baltimore from points west and north of there. She obviously kept all his letters (including a rather sweet one from his sixteen-year-old daughter by his first marriage); he doesn’t seem to have kept any of hers.

Sam Wickersham had fallen on hard times in 1859. His first two wives had died young, leaving him with two daughters and two living sons, the youngest of whom, a baby, was the future Attorney-General of the United States (his firm, Cadwallader, Wickersham and Taft, is still going - no, not that Taft, his brother). Several of Sam’s business ventures had failed, and he was locked in a lawsuit with his brothers over their father’s estate (he had died in 1858, a few months before Sam’s second wife died in childbirth). He was based in Pittsburgh, Fanny Belt was in Philadelphia where her father was an impoverished itinerant homeopathic doctor. Sam was born in March 1819, Fanny in August 1833, so she was 25 and he was 40 when they got to know each other in mid-1859. The correspondence ends when they married in early 1861, the Civil War having already started. They had five children over the next eleven years, giving him a grand total of nine. The oldest of the five married the metallurgist Sir Robert Hadfield; the middle one was my great-grandmother (my great-grandfather was also into heavy metal, and also postal chess); the youngest inherited the family papers and passed them to his own daughter, who passed them to her son Wick.

Most of the letters are just the usual passionate communication from a chap who can’t quite believe his luck at scoring with a pretty young woman, but there are a couple of really fascinating moments. In the summer of 1860 Sam heads 1200 miles north to the Keweenaw peninsula in Michigan, to investigate his holdings in the North American Mine at Phoenix, and writes to Fanny with some lovely descriptions of landscape and nature (and the eclipse). He liquidated that investment for $50,000 (the Internet says that’s about $1.5 million at today’s prices), which obviously made the courtship a bit easier. I found it really interesting that he took his son Tommy with him on this trip (Tommy had his 12th birthday during the journey). It seems that that part of Michigan was considered safe enough for Sam to bring a child with him on a business trip, though it had been settled for less than twenty years.

It’s also striking to read of the looming war, which Sam simply doesn’t see coming. On 1 November 1860, he writes that if Lincoln is elected,

I predict then in one year every southern state will say amen to his election and pronounce it the most constructive republican administration since the days of Washington.

As the election results come in (slowly, of course), he writes on 10 November, 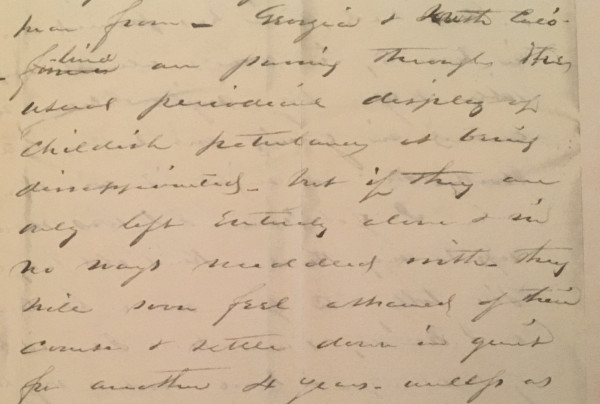 It’s really interesting to realise just how unprepared the North was for the war. But less than a month later, on 7 December, Sam stops by Harrisburg and has “a long talk” with the Governor of Pennsylvania, who tells him that war is inevitable.

Sam’s own base when in Pittsburgh is with his friend and lawyer William Shinn at Evergreen Hamlet, which Shinn had founded, planned and built. There is a rather bizarre exchange where it becomes apparent that Shinn’s wife is briefing against Sam, as a wastrel and bankrupt. Once he gets the money from the Michigan mine, we hear nothing more of that.

It is interesting to reflect that this sort of archive will become impossible to reconstruct for courting couples of the 21st century. Emails are pretty ephemeral, text messages and other apps even more so. My own great-great-grandchildren will not have so much to go on.