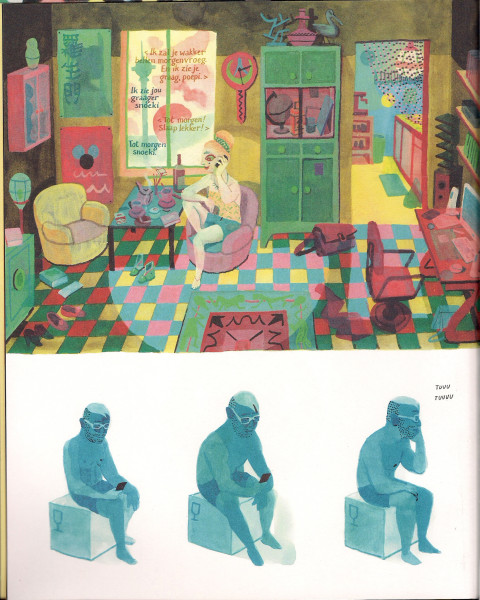 I was blown away by Evens' previous book, Ergens waar je niet wil zijn (The Wrong Place), and grabbed this as well; it won the Fauve d'Angoulême: Prix Spécial du Jury at the Angoulême International Comic Book Festival. Here's a (wordless) trailer for it: Before I get into substance, I'm really intrigued by the three different titles in three languages of publication. The Dutch original can be translated as "The Entertainment" though the connotation is of a particular event rather than an ongoing activity. In French, the book's title is "Les Rigoles", which literally means "The Gutters" but more slangily could be "The Laughs" or perhaps "The Larfs", close to the sense of the Dutch (if plural rather than singular); but "Les Rigoles" is also the name of the author's favourite cafe in Paris. The English title, "The City of Belgium", weirdly contradicts the spirit of the story which is that the events (and the gutters) could be set in any western European large city that isn't Berlin, and the setting nods to Paris, Antwerp and Brussels (as well as being closer to the beach than any of those three cities actually is). So there's a strange ambiguity about what story is really being told here.

Anyway. As with Ergens waar je niet wil zijn, we have a story with three main characters, Jona, Victoria and Rodolphe, who meander across their unnamed city finding (or avoiding) deeper truths about their lives, with again the vortex of carnality and enjoyment that is Disco Harem providing a geographical anchor for the narrative strands. Robbie from Ergens waar je niet wil zijn puts in a guest appearance at one point. Evens' watercolour style is arresting and intriguing, and his gimmick of giving each of his protagonists a primary colour (Jona blue, Victoria yellow and Rodolphe red) works well to convey their very different perspectives. He gives his minor characters more of a voice here too, each of the three protagonists acquiring a strange sidekick, and also each getting rides with the same mysterious taxi driver, who tells each of them different stories. I enjoyed most of it; I felt that the three stories did not all end equally satisfactorily - in particular the last 40 pages (of 300) follow just one of the three protagonists on his personal path to enlightenment, which felt unbalanced. But in general it's pretty good. You can get the Dutch original here and the English translation here.

This was my top unread non-English comic. Next on that list is Oyasumi, by Renee Rienties.