Long long ago, between 1983 and 1985, I ascended the dizzy heights of Second Percussionist in the City of Belfast Youth Orchestra, the fruit of many Saturday mornings at Rupert Stanley College in East Belfast, rehearsing for church services (once a City Hall reception) and ending each year with a concert at the Ulster Hall.

The City of Belfast School of Music was a crucially important institution in those days. I made lasting friendships there with people from other schools than my own who I am still in touch with, notably clarinettists Geraldine Denny (now Geraldine Green) and Christine Bell (now professor of constitutional law in Edinburgh). Presided over by Leonard Pugh, an irascible and memorable Welshman, it was one of the few places where Catholic and Protestant kids met on equal terms, despite being located in a rather Loyalist corner of the city centre. (Not actually very far from the flat I lived in when I moved back to Belfast in 1991.) These days, it has moved to the north of the city centre, but remains a place where young people from all backgrounds learn and work together.

To my delight, I discovered that the CBYO was touring Belgium and the Netherlands this week, staring with a Tuesday lunchtime performance at the Northern Ireland representation in Brussels, then again that evening at Notre Dame du Sablon downtown, and finally at the university concert hall in Leuven last night. I was able to go to all three of the concerts. (They are paying tribute to the war dead at Ypres today, and playing in Amsterdam tomorrow to finish the tour.)

I was further delighted to meet the orchestra's current percussionists, Miriam and Izzy, who are far far better performers than I ever was. 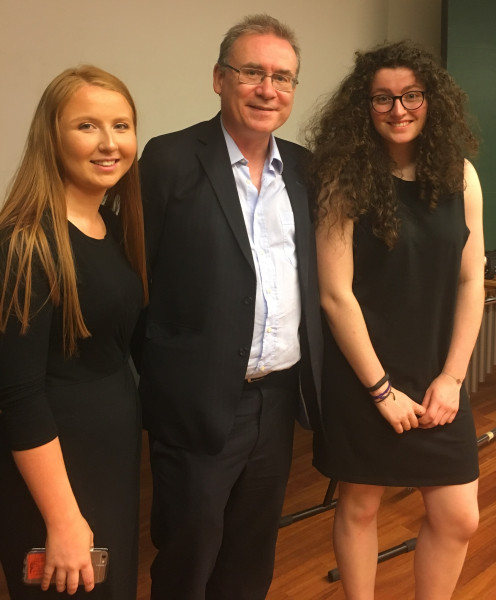 And even more delighted to find that Mike Smyth, who overlapped with me as a percussionist in my first year with the CBYO, was also there. We had not seen each other for 34 years but picked up immediately, exchanging memories and anecdotes. He stayed in Northern Ireland and now trains the Youth Orchestra's perussionists. Apologies to him for the camera angle which makes it look as if he has grown an off-centre pair of antennae; I need to improve my selfie game. 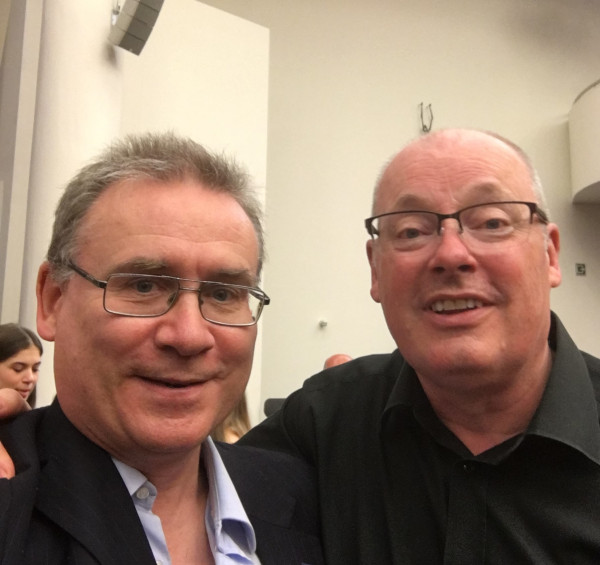 The performances were nostalgic, and energetic, and inspiring, and also technically rather good. Here's a quick shot from each of the concerts, featuring the back of conductor Paul McBride (also Principal of St Malachy's, one of Belfast's best known grammar schools): 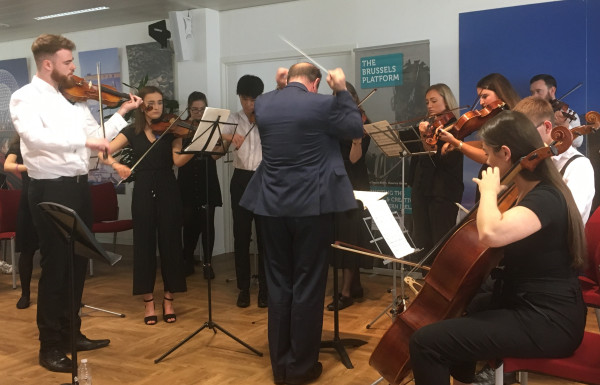 At the Northern Ireland representation, strings only (plus cimbalon soloist, see below) At Notre Dame du Sablon, where I had never been before 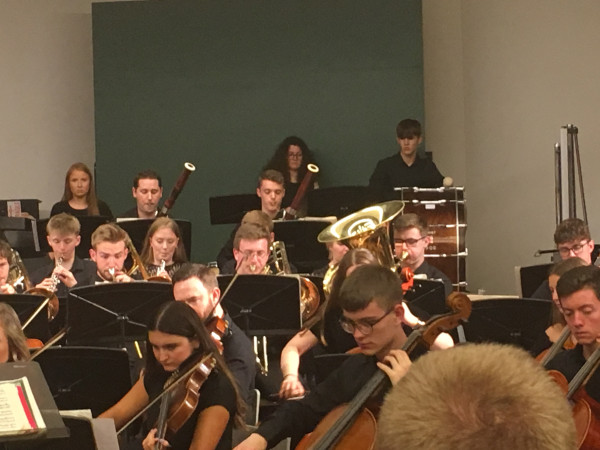 At the Rector Pieter De Somer hall in Leuven
The soloists were also impressive. Erzsébet Gódor, a Hungarian performer, played the cimbalom at the two Brussels concerts - a remarkable instrument I hadn't seen before. 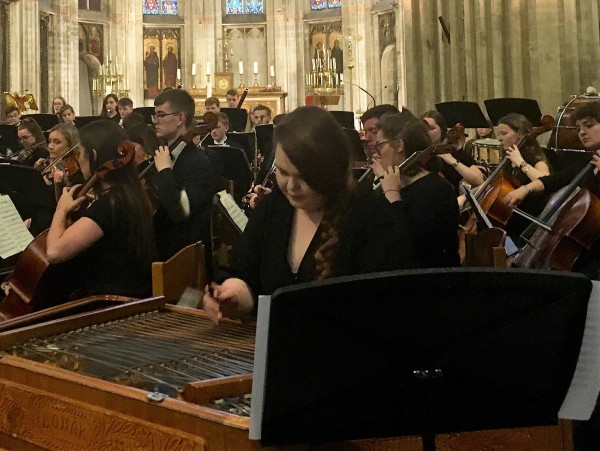 Miriam performed one of the same pieces on the xylophone at Leuven. 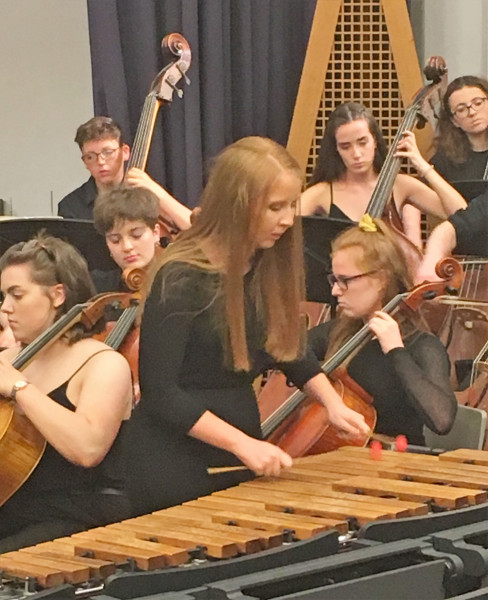 Two other very impressive soloists - Ellen Quinn on the cello in Brussels, and Yuan Chen on the violin in Leuven. (And apologies to trumpeter Eoin O'Gorman who I didn't manage to get a decent shot of.). 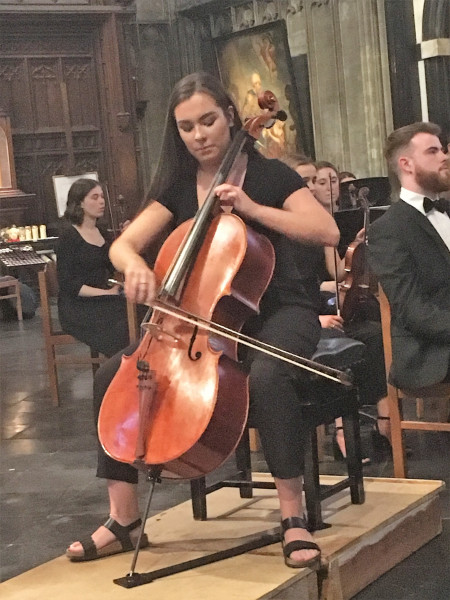 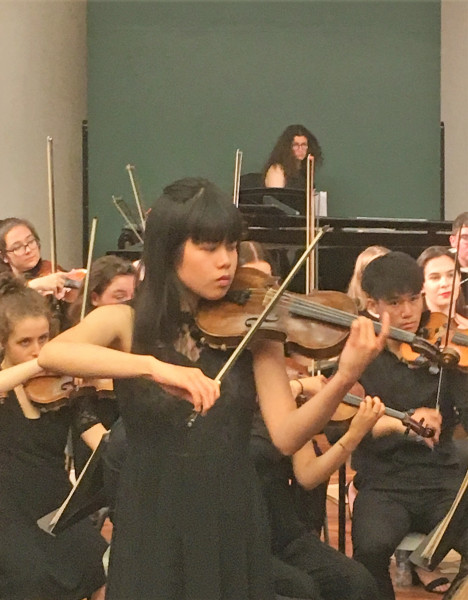 I wasn't, frankly, all that good a percussionist; certainly nothing like as good as Anthony Kerr, who was in the CBYO alongside Mike Smyth and me, and has gone on to become Britain's best-known jazz vibraphone player. Here's a recent video of him playing Gershwin's Summertime (which I think we performed as an orchestra back in the day).

Actually, to finish on a slightly sour note: the head of the School of Music, appointed five years ago, remains only an Acting Principal rather than fully in place, pending a reorganisation of music education services across Northern Ireland whch hasn't happened due to the lack of devolved government. Yet another case of the instability at the top political level affecting the lives of people trying to make the community a better place.
Collapse