Gigi won the Oscar for Best Motion Picture of 1958, and picked up another eight, Best Director (Vincente Minnelli), Best Adapted Screenplay (Alan Jay Lerner), Best Art Direction - Set Decoration, Best Cinematography (color) (Joseph Ruttenberg), Best Costume Design (Cecil Beaton), Best Film Editing (Adrienne Fazan, a rare woman winning one of the off-screen categories), Best Musical Score (André Previn) and Best Original Song ("Gigi" by Lerner and Loewe). Winning nine Oscars was a new record at the time (eight had been won by From Here To Eternity, On The Waterfront, The Best Years of Our Lives, Going My Way and Gone With the Wind), but this record was broken by Ben-Hur the following year. It should be noted that although none of the cast were nominated in the acting categories, Maurice Chevalier got a special award from the Academy. 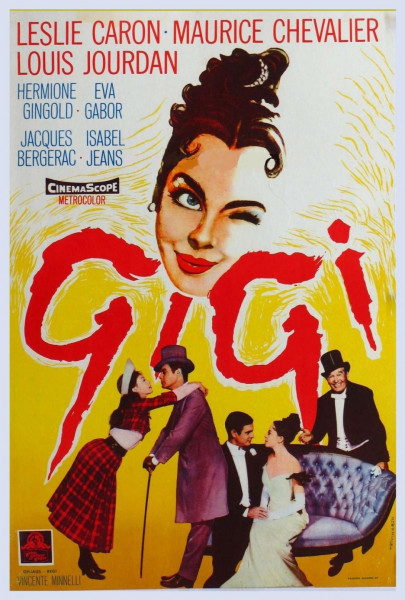 The other contenders for Best Motion Picture were Auntie Mame, Cat on a Hot Tin Roof, The Defiant Ones and Separate Tables. On the IMDB rankings, Gigi places 18th and 9th, with Vertigo, Touch of Evil, Cat on a Hot Tin Roof, The Blob and The Fly ahead of it on both lists. Hugo voters chose "No Award", the first year this ever happened, ahead of Dracula, The Fly and The 7th Voyage of Sinbad. (This was also the year they No-Awarded Brian Aldiss for Best New Writer.) I have seen absolutely none of these; in fact the only other film I'm sure I have seen from 1958 is Jacque Tati's Mon Oncle.It's a musical romance set in Paris in 1900. Gigi is a young girl who is being educated to be a rich man's female companion by her grandmother and aunt. She grapples with her relationship with young Gaston, whose uncle Honoré is an old flame of her grandmother's. It's the third consecutive Oscar-winner based on a story first written in French (after Around The World in 80 Days and Bridge on the River Kwai, two films that are very different from each other and from this). It's also the first musical we've had since An American in Paris, though there are a few more coming up. Here's the Oscar-winning title song (with Spanish sub-titles, sorry), the moment when Gaston realises that she has grown up and he loves her.As usual, starting with the bits I didn't like so much, and as usual that list begins with whitewashing: there is not a single non-white face to be seen in the film, although Paris in 1899 was already pretty multi-ethnic (Severiano de Heredia served as the equivalent of Mayor of Paris in 1879-80 and as a minister in the French government in 1887) and Paris in 1958, when the film was made, even more so.

Apart from that, there's not a lot to dislike. The story is actually somewhat subversive of gender politics; Gigi and her older relatives are navigating a world ruled by men, sure, but doing it at their own pace and according to their own rules; the climax is where Gigi puts Gaston in the position where he must ask her grandmother for permission to marry her. It's not quite as in-your-face as the original - once again, Hollywood removes feminism from the text - but the fact that sex outside marriage is portrayed from the very beginning as a cheerfully accepted relationship choice is startling for 1958. I wrote previously that in both Wings and All Quiet on the Western Front, France is a place of wartime fascination and moral hazard, and the same is true for Casablanca, another war film. The Life of Emile Zola is set almost entirely in Paris, a place of superior achievement, the centre of the cultural world, with its own drama and internal dynamics which the audience is expected to recognise and relate to. The Paris of An American in Paris is much more wholesome, if also spectacular. But here we're back to a combination of Zola's colourful city with the divergent morality of the war films.

The two male leads are a little weaker (and this is another of the rare Best Movie winners where none of the cast were nominated in the acting categories) - Louis Jourdan is a bit underwhelming as Gaston, and Maurice Chevalier, a grand old man of stage and screen, distinctly over the top as Honoré. My heart sank a bit when I realised that he opens the film singing "Thank Heaven for Little Girls" - though in fact it's a much less creepy song than the title suggests in these less innocent times.The music in general is fine. The only other Lerner and Loewe musical I know is My Fair Lady (which we'll be getting to in a bit) and basically it has more memorable songs. One of them is not "Say a Prayer for Me Tonight", originally written for Eliza Doolittle but removed and given instead to Gigi. Here's Leslie Caron singing it, with a heavily drugged cat. (This is a reconstruction - Betty Wand dubbed for Leslie Caron's voice in the film.)The three leading women are all adorable and watchable - Isabel Jeans as Aunt Alicia, Hermione Gingold as grandma Madame Alvarez, and especially Leslie Caron in the title role, at 26 convincingly playing a character ten years younger.

The women are poorly served by the score - there are twelve songs, eight of which are sung by men only and another three by Betty Wand dubbing Leslie Caron. But the one song which actually features one of the female leads in her own voice is I think the film's most memorable, the duet between Hermione Gingold and Maurice Chevalier, "I Remember It Well".I have been in love with Leslie Caron even since I first saw An American in Paris (also directed by Vincent Minnelli from a script by Alan J. Lerner), and hugely enjoyed her cameos in Damage (1992) and Chocolat (2000). I think she dominates the film, despite being the youngest of the lead performers.

Let me just remind you that she umpired a cricket match as Countess Mavrokordati in The Durrells only two years ago. 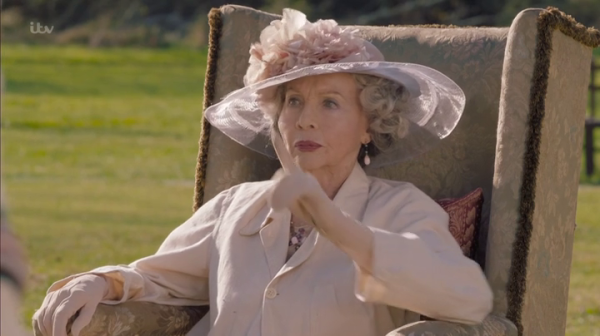 I liked Gigi and I'm putting it 14th out of 31 films so far, behind It Happened One Night but ahead of Marty. You can get it here.

Next up is Ben-Hur.

The book by the great French feminist writer Colette is very short. Here is the second paragraph of the third section:It's recognisably the same story, with some of the same jokes and lines, though there is no Honoré - completely invented for the film, and I guess to an extent for Chevalier. Gigi is explicitly not yet sixteen years old; obviously Hollywood could not go near there. Gigi's mother, completely invisible in the film, makes a few appearances in the book (the father has been long absent):

As for her features, no one could yet predict their final mould. A large mouth, which showed beautiful strong white teeth when she laughed, no chin to speak of, and, between high cheekbones, a nose – ‘Heavens, where did she get that button?’ whispered her mother under her breath. ‘If you can’t answer that question, my girl, who can?’ retorted Madame Alvarez.

It's a succinct sketch of Paris in 1899 from the point of view of women trying to get by in a man's world.

I got it in combinations with a slightly longer book by Colette, La Chatte/The Cat, about a young woman who discovers that her new husband loves his cat more than he loves her. Here's the second paragraph of the third chapter:It's a bad sign when a newlywed husband is irritated at the sight of his wife naked. None of the characters in this story is pleasant, including the cat, but it's well told, and reminiscent of a notorious recent Reddit thread.

You can get Gigi and the Cat here.