I'm only very loosely engaged with the Lib Dems these days, but apparently I am engaged enough to get a vote in this month's leadership election - as I did in 2006, 2007 and 2015. There really seems very little to choose between the two candidates on policy grounds. They have similar sets of supporters, of whom I know roughly the same number in both camps. The Lib Dems are on a roll at present and seem to me likely to have a jolly good election result and a chance of participation in another coalition government under either potential candidate.

And for me that last point is crucial. The Lib Dems failed to differentiate themselves sufficiently from the Conservatives in government in 2010-15, and rightly paid the price for that. Of the two candidates, I see Jo Swinson has having had a better record during the coalition in that she staked out and defended policy territory that was distinctive to the Lib Dems. It's also a matter of fact that she has simply got more press coverage. (See Google Trends chart below; she is ahead of Ed Davey in 98 months out of 178, while he leads in 58 months; just looking at the coalition period, the lead is narrower but still there.) The coalition's record is one of the few clear dividing lines between them: Jo Swinson is clear that the party needs to "own the failures" of its time in government. "We lost too many arguments. When they fought dirty, we were too nice." Ed Davey on the other hand seems to think that the cratering of the party's reputation in government was a mere PR problem. It was much worse.

It's not just a matter of who will get the party into government after the next election; it's a matter of who is more likely to preserve it from the voters' wrath at the election after. So I think I'll #JoinJo. 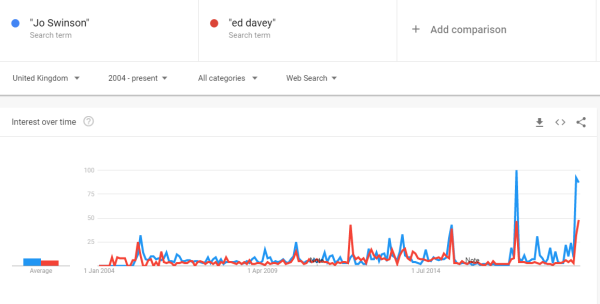