An hour or so later, Frances left the house herself: she went to the florist's to fetch the wreath for her father's grave. And as soon as she and her mother had had their lunch, they set off for the cemetery.

Sarah Waters is a recent discovery for me, and I hugely enjoyed Fingersmith (but rather less The Little Stranger) when I read them last year. What she did really well in both books was to convey a sense of what it was like to live in a particular historical era, especially if one was a not terribly remarkable person (and perhaps also a lesbian).

The Paying Guests really blew me away. It's 1922. Frances and her mother, having lost Frances' brothers in the war and her father soon after, are in reduced circumstances and need to take lodgers. Lilian and Leonard are of a less genteel social background and there is a restrained clash of cultures - and then romance, and then murder. The sense of a society where many of the young men have been killed but the old men are still in control is conveyed very effectively, and Frances as the viewpoint character is tremendously sympathetic even when she does things that are fundamentally not very nice. Waters claims to have researched the legal process around murder trials pretty intensely, but the book wears that fairly lightly. Really strongly recommended. You can get it here. 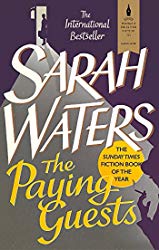