On Friday 31 January 1964, Bob sent Donald Bull an outline for an episode entitled 'The Hallelujah Chorus', which was quickly re-titled 'The Hallelujah Favourite' before becoming 'The Hallelujah Stakes'. Bull liked the story, made a few structural alterations to the storyline, and then commissioned Bob to write the script. The resultant episode of Dr Finlay's Casebook – which was Bob's first paid work for the BBC to make it onto screen – was shown on BBC1 on Sunday 10 May 1964.

This is a nice chunky biography of the greatest of the writers for Old Who. I don't say that lightly. If you check the Doctor Who Dynamic Rankings site, you will see that no other Old Who writer comes close to his record of classics: credited writer of The Caves of Androzani, Talons of Weng-Chiang, The Deadly Assassin, The Ark in Space, etc etc; script editor (and sometimes more than that) for the great Tom Baker years, including Genesis of the Daleks, Pyramids of Mars, The Robots of Death, The Seeds of Doom, Horror of Fang Rock, Terror of the Zygons... Molesworth clearly writes as a fan, but as one who has done immense due diligence, watching all of the surviving Robert Holmes episodes of this, that and the other (in fact he is credited as author of more episodes of Emergency Ward 10 than of Doctor Who) and tracking down interviews, convention appearances and correspondence as well as talking to the many surviving members of the production team who worked with him. (He doesn't seem to have got much out of any members of the cast.)

I have read autobiographies of two other Old Who script editors, and this is better than either. Derrick Sherwin's Who's Next is a rushed pot-boiler, and Andrew Cartmel's Script Doctor is an excellent micro-study of the last three years of Old Who but has little to say about anything else. Holmes was a young officer in Burma (again!) in the second world war, and then tried his hand as a policeman and a journalist before becoming a full-time television writer. His first Doctor Who story was The Krotons, which is actually quite a good idea let down by the poor production values of Patrick Troughton's last season, and his second was The Space Pirates, a rollicking space opera which might have a better reputation if more than one of its six episodes had survived. He bonded with Terrance Dicks, the new-ish script editor, who commissioned him for the opening story of three of Jon Pertwee's five seasons, introducing the Sontarans, the Autons, Sarah Jane Smith, Jo Grant, Mike Yates, Liz Shaw, the Master and the Third Doctor himself. He was then prevailed upon to take on the script editor's role with the arrival of Tom Baker as the lead actor, working with Philip Hinchcliffe as producer in a combination of talents that was never surpassed in Old Who, and perhaps not in New Who either. He stayed on for a few more stories after Hinchcliffe's departure, and wrote several other things that I remember vividly - as script editor of Shoestring, he wrote the 1980 episode "Mockingbird" which sticks in my mind after 39 years; there was the 1981 series The Nightmare Man; and "Orbit", the third-last episode of Blake's 7 and one of the absolute best. (Avon: "Dammit, what weighs seventy kilos?" Orac: "Vila weighs seventy-three kilos.") I must hunt down the 1965 series Undermind, for which he wrote the last two episodes.

Holmes' life ended sadly early. He died aged only 60 in 1986, half-way through writing the final story of that year's Doctor Who season. This was the much contested Trial of a Time Lord arc, for which Holmes had contributed the first four episodes and was due to write the final two (but died before starting the last one). A higher-up at the BBC had sent round a brutal deconstruction of the flaws of the first four episodes (generally now referred to as The Mysterious Planet), which clearly deeply wounded Holmes and possibly even contributed to his illness and death. In a career of a quarter of a century, nobody before had been quite so brutal about his writing. It's painful reading, and the one positive thing I will say is that the account here raises Eric Saward's reputation in my view, as he attempted (but failed) to shield Holmes and also keep the show on the road. But between the lines it's clear that Holmes no longer had what he had once had had. Between 1982 and his death in 1986, literally the only non-Who scripts he sold were three episodes of Bergerac and five for a short-lived drama series set in a Citizens Advice Bureau. Brutal though it is, the BBC higher-up's criticism of The Mysterious Planet is mostly pretty well-founded.

This is good material for a wider study of how the BBC (and indeed British television) changed in the Thatcher era (1981 is the point at which it all seems to go wrong). But it's an engaging book in its own right, illustrated with treatments and out-takes from Holmes' writing. It's also striking how few people seem to have a bad word for him (cf John Nathan-Turner). It would be interesting to know a bit more about his war record and early journalism, but otherwise this is a pretty decent example of biography of an important figure in cult sf. You can get it here. 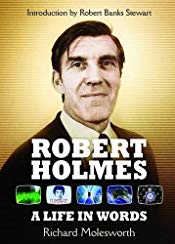