Second paragraph of third story ("What the Seasons Brought the Almanac Maker"):

Note: tracking down the text, and then being sure I had the right sentences to match the English paragraphing, was rather a challenge. In the end I found the full Japanese text here, and five different translation engines here (all of which gave completely different results).

I was moved to get this after reading John Wills' 1688, though in fact it was published a couple of years earlier, in 1685. It's a set of five love stories set in contemporary 1680s Japan - in fact, all based more or less on real life, where those who loved outside their social class would often face the death penalty (in four of the five stories, one or both of the protagonists is executed). I found it a really easy quick read, markedly more realistic than, say, Pilgrim's Progress (which was published the previous year). The last of the five stories is particularly interesting - Gengobei, a monk, is heartbroken by the deaths of two young boyfriends in quick succession; Oman, a young girl, falls in love with him and disguises herself as a boy to get into his bed; Gengobei discovers he likes her too, and they live happily ever after (after certain dramatic tribulations). It's the only story of the five with a happy ending. Sex is a universal, and probably tales of doomed love have fascinated humans since we were first able to gossip about how Ugg and Obba wanted to get together despite being from different caves, but here we have a fascinating snapshot of a changing Japan, a growing bourgeoisie not entirely happy at the policing of sexuality by the authorities. The translation by Wm. Theodore de Bary is maybe a bit old-fashioned and a twenty-first century treatment would be fun to read. You can get it here.

This was the top unread book by a non-white author on my shelves. Next up is For the Love of a Mother: The Black Children of Ulster
by Annie Yellowe Palma. 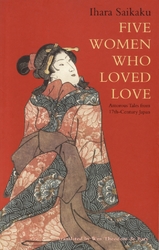