There was a gentle hiss as the train doors parted. As Bernice stepped out onto the plush carpet, an android server moved along the platform towards them, displaying a tray of sparkling drinks. Its long, thin body was sprayed the pale pink and green colours of Spring. Its face was smooth, silvery and featureless until it saw Bernice, then two eyes, a nose and a mouth shimmered into place in the traditional human positions. Bernice knew from the on-train audio tour that each server had the capacity to approximate any facial features it came upon, in an attempt to make each guest feel comfortable no matter what their planet of origin.

I thought this was a rather good novel in the Planetary-Archaeological-Adventure mould, in which Bernice (and her two companions, Ruth and Jack) must deal with mysterious giant alien cat statues, randy researchers, having access to all future history, and an obligation to write poetry before the week is out. I thought the characterisation fairly crackled and the plot seemed to hang together. I've rather got unmoored from the overall Bernice continuity (I don't think I knew who Jack actually was, and there is no introduction) but apart from that I rather enjoyed it. You can get it here.

Next up: Filthy Lucre, by James Parsons and Andrew Stirling-Brown. 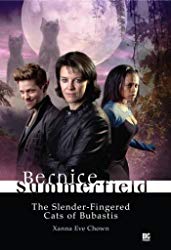