Second paragraph of third chapter (re the Companion Chronicles):

The opening story of the fourth season was a sequel to Simon Guerrier's hugely popular Home Truths, which marked the return of Sara Kingdom. The Drowned World carried on the story of Sara's 'ghost' in the house, talking with Robert. Simon said, "David didn't really ask for anything except a second story for Sara. I sent him a number of ideas - both for the stories she recounted and the framing device around them. And we was really keen to find out more about Robert. So I worked up an outline for The Drowned World and said I'd an idea for a third one."

I was rather underwhelmed by the first Big Finish Companion volume when I read it some years ago. This is considerably better, though it's barely worth the hefty cover price. It covers Big Finish's output from 2005 to 2008, with cast lists and production details, but also interviews with the production team including some self-criticism of stuff that didn't work. This time I knew pretty much all of the audio plays produced, with the exception of the The Tomorrow's People and Stargate ranges, and I realise that I did indeed miss some crucial chunks of the Bernice Summerfield audios when I was listening to them. It's a good starting point for further analysis of the amazingly diverse and complex Big Finish ranges, but it misses by not including any external criticism - not that I am making great claims for my own sporadic commentary, but quite a lot has been written about it, and it would be interesting to feel that there was some sense of responsiveness to external feedback. You can get it here.

My own consumption of BF has decreased since I discovered Ingress, Duolingo and Pokemon Go. But I will come back to it once I have achieved Level 40. 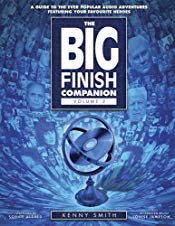