This review contains SPOILERS for both the film and the novel. The film has been out for 62 years, but if you haven't seen it, do go and see it first before reading this.

The Bridge on the River Kwai won the Oscar for Best Motion Picture of 1957, and picked up another five, Best Director (David Lean), Best Actor (Alec Guinness), Best Adapted Screenplay (Pierre Boulle, with Michael Wilson and Carl Foreman, who actually wrote the screenplay, being awarded posthumous Oscars for it in 1984), Best Music, Scoring (Malcolm Arnold), Best Film Editing (Peter Taylor) and Best Cinematography (Jack Hildyard), with Sessue Hayakawa losing out to Red Buttons in Sayonara for Best Supporting Actor. The other contenders for Best Motion Picture that year were 12 Angry Men, Peyton Place, Sayonara and Witness for the Prosecution, none of which I have seen, though I have read the theatre script for 12 Angry Men and also the Agatha Christie short story on which Witness for the Prosecution is based. 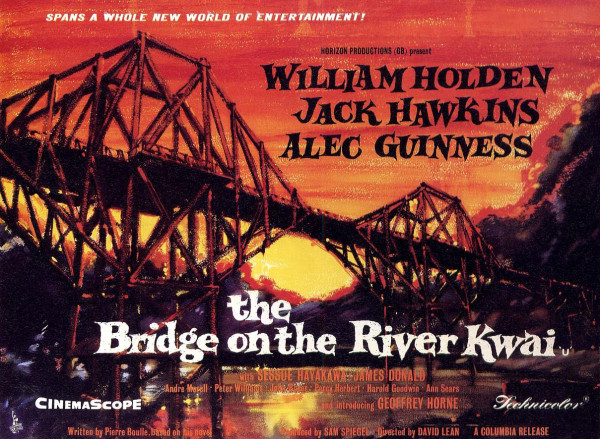 IMDB users rank The Bridge on the River Kwai 5th or 2nd of the films of 1957, with 12 Angry Men top on both rankings and The Seventh Seal, Funny Face and Paths of Glory between the two on the popularity metric. There were a lot of famous films, these and many others, produced in 1957, but I have seen none of them at all apart from The Bridge on the River Kwai, which I had previously seen when it was on TV at Christmas time in 1981. Here's a contemporary (post-Oscars) trailer:

I've never been to South East Asia, though I have a number of links there - my godfather and one of my uncles actually fought in the Burma campaign; my father was born in Malaysia; my niece was born in Vietnam; my aunt appears as an extra in The 7th Dawn, which is set in Malaysia a few years later and also stars William Holden along with my aunt's schoolfriend Susannah York. (You can see my aunt dancing in the embassy scene about 38 minutes into The 7th Dawn, if you want to check.) I'd love to go.

Back to The Bridge on the River Kwai. It is a problematic film in terms of race and gender, but it is spectacular in its execution on every level, and I'm bumping it right to the top of my table, in fifth place just behind the greatest of all war films, All Quiet on the Western Front, and just ahead of the soldiers returning in The Best Years of Our Lives. Like last year's Around The World In Eighty Days, it's an adaptation of a French novel about an Englishman's encounter with Asia, with the spectacular collapse of railway bridge near the end. There are also some important differences, of course.

Gender: There are five credited women in the cast and none of their characters are named - Ann Sears plays an anonymous "Nurse" whos is William Holden's character's love interest, and four Thai actresses, credited as Vilaiwan Seeboonreaung, Ngamta Suphaphongs, Javanart Punynchoti and Kannikar Dowklee are credited as "Siamese girls" - the partisans who accompany William Holden's character through the jungle to the final confrontation. There is also an uncredited nurse (as opposed to the credited but unnamed nurse played by Sears).

Having said that, this extraordinarily minimal acknowledgement of half of humanity on screen is, believe it or not, a considerable advance on the original book, in which no women at all appear or are even referred to in passing. (There is a figurative reference to maternal love.) The fact that the Thai partisans are young women rather than men gives the march through the jungle and the destruction of the bridge a much more gritty feel.

Race: Let's face it, this is a film about an Englishman encountering the Orient. The audience is expected to share the English and American characters' views and perspective, and the Japanese and Thais are the Other. And yet... the fact is that the story is rooted in Pierre Boulle's real life experience of working for the Japanese as a prisoner of war in Indochina. And Sessue Hayakawa's Saito, who begins the film as the evil head of the PoW camp, evolves into a complex character whose relationship with Alec Guiness's Nicholson defines the film. It should also be said that unlike in last year's Around The World In Eighty Days, at least we have Japanese actors playing Japanese characters and Thai actors playing Thai characters. Again, it's a better effort than the original book, where Boulle allows himself to slip into stereotypes of Japanese, English and Americans rather readily, and the Thais are even more anonymous. (As well as there being no women in the book, there are no French people either, nor any reference to France.)

There is one very dark-skinned extra whose only function is to operate the Japanese officers' fan.

NB that the upper part of the Mae Klong river, which was crossed by the Burma Railway, was renamed the Khwae Yai in the 1960s by the Thai government to bring real and fictional geography into closer alignment.

Music: Here we have the great composer Malcolm Arnold at his best. This is the entire soundtrack album:
But of course what everyone remembers is the extraordinary scene in which the PoWs arrive, defiantly whistling "Colonel Bogey", and at the end of the scene the orchestra swells into Arnold's "River Kwai March", conveying the sense of lost military glory so very vividly.

Script: A surprising number of memorable lines in the film are lifted directly from Boulle's novel, including "an unfortunate disagreement for which I was not to blame", "healthy competitive spirit", "the elm piles of London Bridge have lasted six hundred years", and "Our experience of missions dropping into this sort of country can be summed up as follows: if they do only one jump, you know, there’s a fifty per cent chance of an injury. Two jumps, it’s eighty per cent. The third time, it’s dead certain they won’t get off scot free." But a great film has been made from a good book here, and the changes to the story made by Michael Wilson and Carl Foreman are crucial from the beginning - Shears is not a fellow-prisoner or impersonating an officer in the book - to the end - Boulle's Nicholson does not have an epiphany and successfully prevents most of the sabotage before his death. In particular, a lot more is made of the commando raid in the film than in the book. These are all good dramatic choices. It is a matter of disgrace that Wilson and Foreman's Oscar-winning writing was not recognised for almost thirty years.

Cinematography: I should have said last year that the new wide screen format enables a vast amount of spectacle to go on the screen. A less gifted team would allow some of this extra space to go to waste, but that's not happening here. I am sure that someone more familiar with the respective landscapes of Thailand and Sri Lanka than I am would be able to point and laugh at the differences, but basically it all looks gorgeous, and although it was presumably all filmed on the same short stretch of the Kelani River in Sri Lanka, we get a great sense of a long journey.

And the most extraordinary scene of course is the final collapse of the bridge with the train tumbling off it (as previously mentioned, added from the book).

Alec Guinness: All of this is a huge achievement. But what keeps you watching to the very end of two hours and forty-one minutes, even if you already know perfectly well what is going to happen, is the performance of the leading man. (It is striking that Guinness is billed third, and Hayakawa fourth and below the line, in the publicity posters; were Hawkins and Holden really such box-office draws?) He takes us inside the mind of Nicholson, whose concept of duty drives him to build the best possible bridge, even though this could lead to the end of the British Empire, who is grasping the best he can at dignity for himself and for his men, and even for the Japanese to an extent, in appalling circumstances; and who at the end realises what he has done, and destroys it.

It's a great film. You can get it here.

I will now watch The Incredible Shrinking Man, which won the Hugo that year, and then progress to Gigi, of which I know nothing except that it stars the glorious Leslie Caron.

I'm 30 films into this project now, so here are my rankings so far, with the most recent ten picked out in red. It's been a good decade, with six of them in my top ten and only two in my bottom ten. That said, it's going to take a pretty awful Oscar-winning film to break into my bottom five, all produced before 1936. See also my previous rankings of the first 10 and first 20.

As for the book by Pierre Boulle, here's the second paragraph of the third chapter:
As already noted, the book is a good book but not as good as the film. I think it's the first case of a straight adaptation where I have been able to say that quite so firmly. There are no women; the English, Americans, Japanese and Thais all play somewhat to national stereotype. On the other hand, the core narrative of Nicholson as English army officer, attached to his duty for entirely recognisable reasons, and Saito as his captor who ends up being effectively captured by his prisoner, is a firmly sound story and well told. As a French author, Boulle is able to keep an ironic detachment from the drama, and perhaps this ends up a bit less manipulative of the reader/viewer. Boulle's ear for dialogue and character meant that many of his best lines were preserved for the screenplay (for which he won an Oscar, not entirely on his own merits, as noted above). It's also a really short book. Strongly recommended. You can get it here.