I’ve been a member of the Brussels Brontë Group mailing list for many years, but until today had never been to any of their events. However, with the rest of the family away this weekend, rather than be at home alone I made a rare Sunday morning visit to the capital, where Jones Hayden was leading a two-hour guided tour of the sites most associated with Charlotte and Emily Brontë’s 1842 teaching experience at the Pensionnat Héger, and Charlotte’s return the following year.

Charlotte fell in love with the headmaster, Constantin Héger, who did not return her feelings; she mined this experience directly for Villette and also for her first and least well-known novel, The Professor. As a result she had a rather ambivalent attitude to Belgium and the Belgians, summed up perhaps best in the voice of William Crimsworth, the narrator of The Professor, who sighs:

Belgium! name unromantic and unpoetic, yet name that whenever uttered has in my ear a sound, in my heart an echo, such as no other assemblage of syllables, however sweet or classic, can produce. Belgium! I repeat the word, now as I sit alone near midnight.

I had already read a book or two on the subject, and I know the rather small patch of the city that is relevant fairly well - these days, I often start or end my commute with the walk between my office and the Central Station, and that inevitably takes me to Rue Baron Horta and past the plaque on the Bozar building. 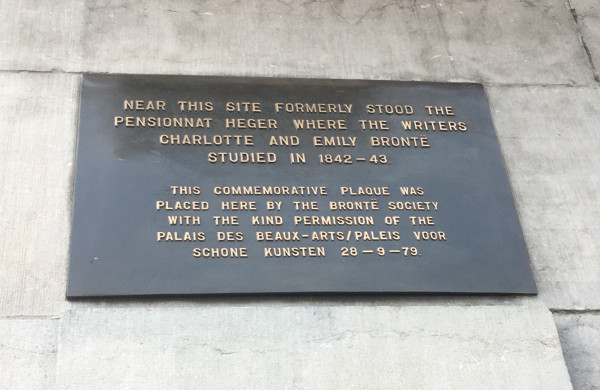 But I discovered lots of new little things, like the unofficial plaque hidden in the truncated stump of Rue Terarken around the corner: 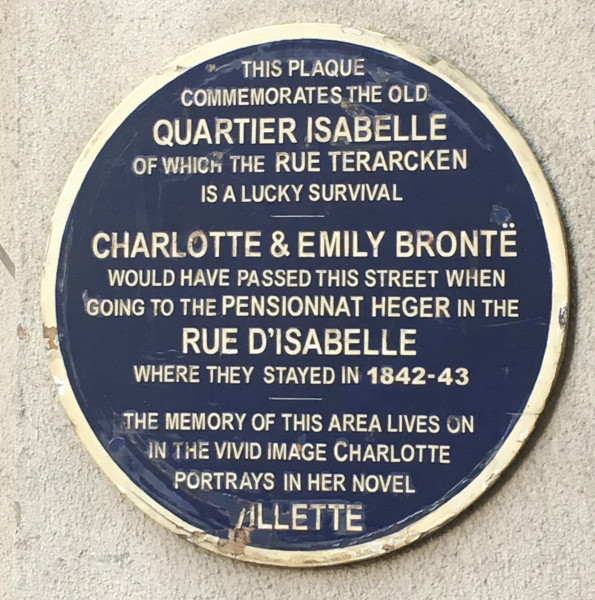 And I had never been inside the Chapelle Royale, a Protestant church since Napoleonic times, where the Brontë sisters would have worshipped. It’s an amazing little haven of mixed Geneva / C of E sensibility. 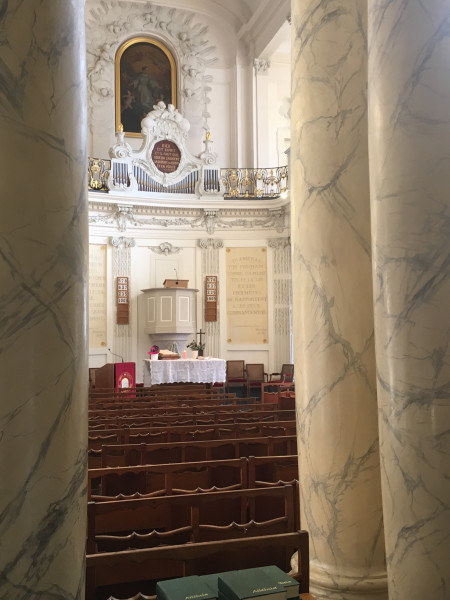 It was a good warm day for a walk. I got a lovely vista over the Mont des Arts to the lower city; the buildings on the Rue de la Madeleine, immediately to the right of the equestrian statue and the tower of the city hall, are probably a rare case of a streetfront that has not changed much since the Brontë sisters knew it. Helen MacEwan, the founder and leader of the Brussels Brontë Group, stood at the top of the steps that lead down from the statue of General Belliard to Rue Baron Horta, which was built on the site of the Pensionnat Heger after it was demolished, and read out Charlotte Brontë’s words reporting from the same spot almost 180 years ago in The Professor:

https://vc.videos.livejournal.com/index/player?player=new&record_id=1231772
I saw what a fine street was the Rue Royale, and, walking leisurely along its broad pavement, I continued to survey its stately hotels, till the palisades, the gates, and trees of the park appearing in sight, offered to my eye a new attraction. I remember, before entering the park, I stood awhile to contemplate the statue of General Belliard, and then I advanced to the top of the great staircase just beyond, and I looked down into a narrow back street, which I afterwards learnt was called the Rue d’Isabelle. I well recollect that my eye rested on the green door of a rather large house opposite, where, on a brass plate, was inscribed, “Pensionnat de Demoiselles.”

Most of the Rue d’Isabelle was demolished in 1909, but you can walk on the upper part of it in the vaults of the Coudenberg Museum.

Because most of the buildings have been destroyed and all the placenames changed, there are fewer opportunities to quote from Villette, but here is Jones Hayden at the bandstand in the Park, locally referred to as the Kiosk, declaiming from one of the few drug-fuelled passages in the works of the Brontë sisters: The song, the sweet music, rose afar, but rushing swiftly on fast-strengthening pinions—there swept through these shades so full a storm of harmonies that, had no tree been near against which to lean, I think I must have dropped. Voices were there, it seemed to me, unnumbered; instruments varied and countless—bugle, horn, and trumpet I knew. The effect was as a sea breaking into song with all its waves.

The swaying tide swept this way, and then it fell back, and I followed its retreat. It led me towards a Byzantine building—a sort of kiosk near the park's centre. Round about stood crowded thousands, gathered to a grand concert in the open air. What I had heard was, I think, a wild Jäger chorus; the night, the space, the scene, and my own mood, had but enhanced the sounds and their impression.

A Jäger chorus did perform at the Kiosk in the Parc de Bruxelles on 15 August 1843, though presumably not all of the audience were quite as high on laudanum as Charlotte Brontë's narrator Lucy Snowe. By the time she wrote Villette, Charlotte would of course have become all too familiar with the effects of mind-altering narcotics from her own family experience.

There were 22 participants in our group, 19 women and 3 men (and one of the other two men had never read a word by any of the Brontës; he had come to hang out with his girlfriend who is more of a fan).

I was pretty proud of myself for struggling into Brussels from darkest Flanders on a Sunday morning; my bubble was burst by meeting two women from Austria who had come specially to Belgium for the walk after reading about it in their local newspaper, and then even more so by meeting another participant from California who had planned her entire trip to Europe around it. It rather put into context my own pathetic indecision about whether I could get up early enough.

I would recommend Brontë fans in Belgium or elsewhere to follow suit. The patch of Brussels concerned is really tiny - five minutes' jog gets you from the Kiosk to the Protestant Church or vice versa - but there is plenty to look at and think about. The walks happen every year in April and October, and are usually flagged up well in advance. And there is plenty to read about the Brontës' time in Brussels to get you in the mood. It's also a salutary reminder of the historic strong ties between Belgium and the UK, which the last three years of tin-eared British diplomacy have eroded so badly.
Collapse