Two years ago today, I posted about how the video announcing the 2017 Hugo final ballot was made on a rainy Saturday in Helsinki.

It's longer than the Helsinki video because we had more categories - 31 rather than 18, with the new Lodestar Award, a special category for Best Art Book, and 11 Retros. The concept is generally the same, but we made a number of technical innovations which I'm noting here for the curious:

Filming was done on two iPhones simultaneously, one for videography with a directional mike, fastened to a hand-held frame frame, the other with a clip-on mike attached to the speaker for sound only.

James Shields did almost all of the filming (I myself filmed both him and Catherine Sharp), and Fionna O'Sullivan did the lion's share of management of the process, so they are rightfully credited as co-directors. I decided the sequence of announcements (mixing 1944 Retros in with 2019 Hugos) and chose my own category (squarely in the middle), but James and Fionna selected the rest of the announcers (with some input from me and the Chair) and mapped out a very cunning plan for filming, essentially in two-hour-long chunks clustered around particular areas (Trinity College, Merrion Square, Dublin Castle, etc).

We were able to film across several days. The first few clips were filmed on the evening of Thursday 28 March, and a few more on the evening of Friday 29th; on Saturday 30 it was all-day, from 9 am to 6pm (and we kept precisely to the timetable, finishing in Dundrum which is convenient for my mother's house, where I was staying); and on Sunday we went to Howth to film Jim Fitzpatrick and then back into the city centre to do a retake of an earlier clip, where we had, erm, originally omitted one of the finalists from the script...

Editing was done entirely by Mark Slater. Each day's clips were uploaded to a shared Dropbox folder that evening, and Mark then worked on them ceaselessly from England. On reflection, it would have been much nicer for Mark if we had scheduled the release date for later in the week; there were only 46 hours between the last clip being filmed on Sunday and the launch of the video on Tuesday, and that's really not very long at all for a project of this length and complexity.

Unlike Helsinki we didn't include background music. The sound environment was tricky enough, and of course we didn't have a clear idea at the outset of how long the video would be.

I missed the Thursday evening filming as I was still travelling to Dublin. But I did watch the start of one of the Thursday evening clips when I woke briefly in the middle of the night. To my horror, the announcer said "nominees" instead of "finalists" (the latter is very much our preferred style). I went back to sleep, and had a nightmare that everyone had said "nominees" and we would have to reshoot the entire thing, and for some reason this meant me flying to South Africa through a solar eclipse while my luggage had been stolen in Belfast. (Dreams are weird.) When I woke up, I watched the clip in full and noted to my relef that the announcer in question had actually caught the mistake and said "finalists" in subsequent takes...

...except that Mark then advised that the take with "nominees" was the only good one, because of too much background noise in the other takes...

...so he successfully managed to paste the audio of the announcer saying "finalists" over the word "nominees" - if you listen very carefully you can hear the cut marks and note that the speaker's lips are not saying "finalists", but I don't think you would spot it if you weren't looking for it. (Go on - see if you can work out which clip I'm referring to!) Otherwise we would have had to re-shoot with a different announcer as the original person had meanwhile gone out of town for the weekend.

More obvious than the ‘nominees’ slip, was the announcement for 1944 Fan Writer. Another outdoor location with sound issues where the far and away best take unfortunately included the announcer say ‘Bob’ Wilson Tucker instead of Wilson ‘Bob’ Tucker, and then pulling a face at the end when she realised.

But it *was* the best take - so I changed the order or words and snipped out the funny face (she wouldn’t have thanked me for leaving it in). The loss of lip sync and the edit is far from seamless, but as no-one has mentioned it I assume I mostly got away with it.

I must say having re-watched it even after knowing about this heroic bit of editing, I can't see it! So well done Mark.

I think a video like this works well if you have a historic city with dozens of potential filming venues, as is the case for both Helsinki and Dublin. I don't think it works in every case, and I encourage future Worldcons to think outside the box. I'd hate for a nifty city video to become part of fannish expectations every year, particularly considering the vast amount of volunteer work it requires. But I was very satisfied with the result, and am hugely grateful to James, Fionna and Mark for making it happen, to the dozens of announcers and other volunteers who participated, and to the promotions and web team for making the launch seamless. 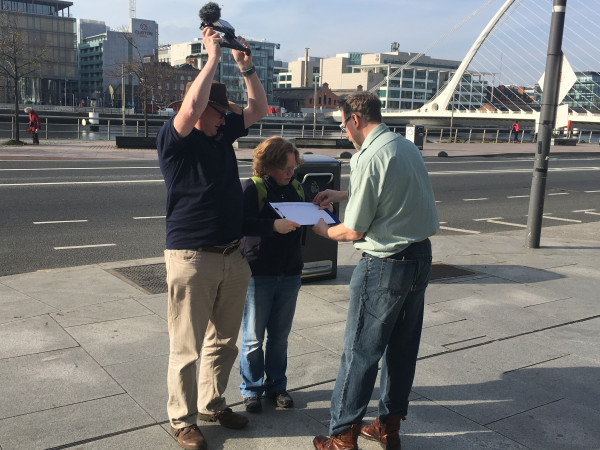 Here are James Shields and Fionna O'Sullivan filming James Bacon's introduction, the first clip we filmed together on Saturday. 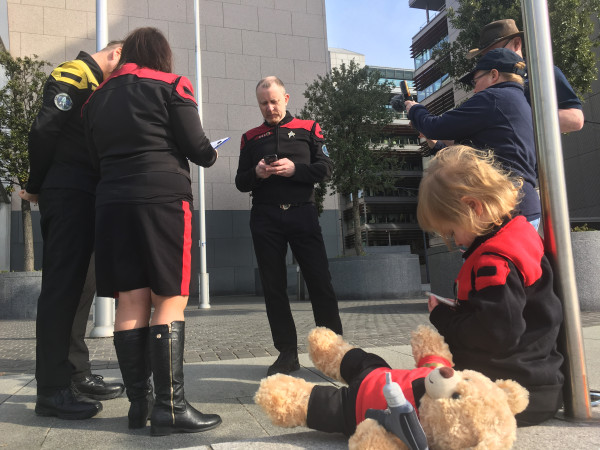 The cosplayers of USS Cuchulain also participated, though the youngest of the crew sat out the actual filming. 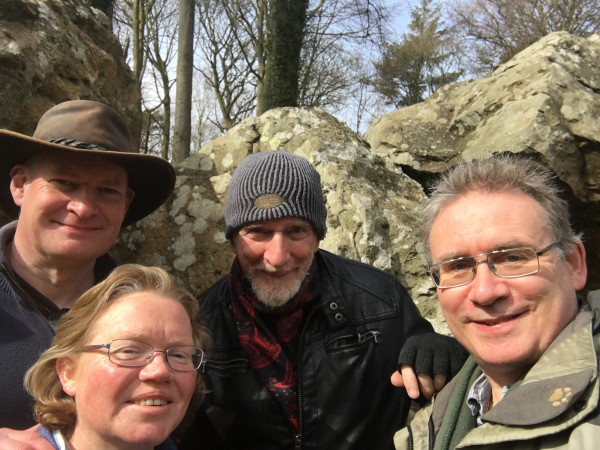 Jim Fitzpatrick suggested that we film at Aideen's Grave in Howth, and we took a commemorative selfie.

(Click to embiggen)
One venue I was sorry not to be able to use - the old House of Lords Chamber (open weekday working hours only).

(Click to embiggen)
Meanwhile in Wynn's Hotel, the Programme team were planning out the day-to-day timetable of the convention.

(Click to embiggen)
Wynn's Hotel was the location where both the Irish Volunteers and Cumann na mBan were founded.
Obviously the Dublin 2019 Worldcon programme team meeting is almost as historic an event. 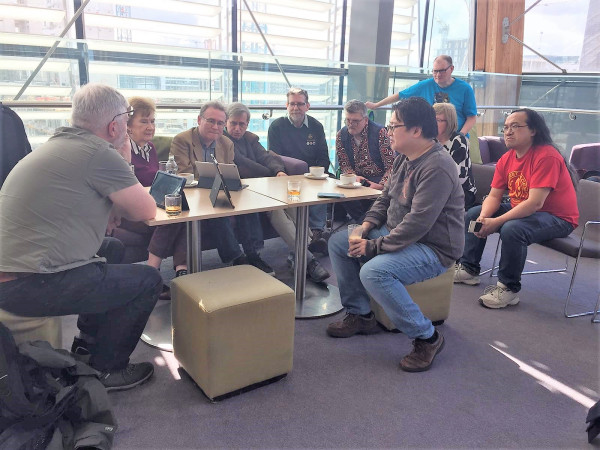 And finally a group of us gathered in the Gibson Hotel to watch the video go live on Tuesday, as the social media team tweeted out the finalists. (Picture taken by Vince Docherty at the scene.) I got home quite late that evening, and am now having a quiet weekend to recover...
Collapse