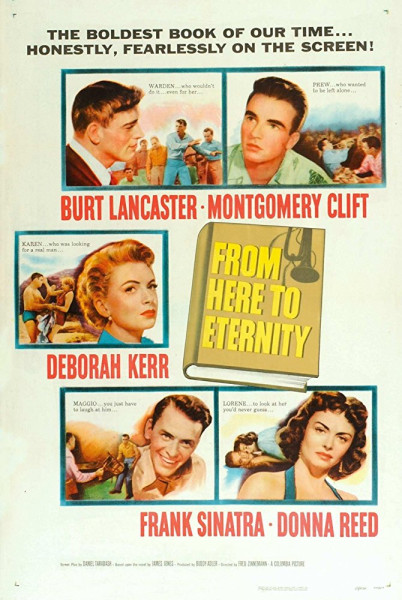 IMDB ranks From Here To Eternity 6th on both popularity and number of rankings for the year. The only films ahead of it in both leagues are Roman Holiday and Disney's Peter Pan. As mentioned previously, the only 1953 films which I am sure that I previously seen are Les Vacances de Monsieur Hulot / Mr Hulot's Holiday, and Le Salaire de la Peur / The Wages of Fear, The War of the Worlds and probably Calamity Jane. Here is a contemporary trailer, in which the only scenes from the actual film are some footage of soldiers on parade and the love scene on the beach. You will observe that it's in black and white, after two winners in colour (An American in Paris and The Greatest Show on Earth):


To cut to the chase, I rather enjoyed this, and it's grazing my top quartile, just below All About Eve (losing points for whitewashing) and just above Olivier's Hamlet. It's the story of three soldiers, and the women who love two of them, grinding out their individuality in the suffocating environment of the US Army base on Hawaii immediately before Pearl Harbour. No detailed spoilers, but it does not have a happy ending. I liked it a lot more than last year's The Greatest Show on Earth, which is also a romantic drama set in a stressful professional environment; the plot is more substantial, the characters more sympathetic and the situation more interesting.

Whitewashing: I am sorry to have to do this yet again. It's now ten years since we had an Oscar-winning film with a speaking part for a black actor. OK, there were not a lot of African-Americans in Hawaii (0.05% in 1940, rising to 0.5% in 1950) but the biggest single ethnic group then was the Japanese (37% in 1940 and 32% in 1950); there is not a single identifiably Japanese face in the film. The book (which I will get to below) portrays a vibrant multi-ethnic Honolulu and indeed a relatively diverse army. Hollywood erased that; the whiteness of Hawaii here is almost (but just about not quite) as bad as the all-white Deep South of All The King's Men. The only visible non-whites in the film are coded as Chinese (7% of Hawaii's population in 1940, 5% in 1950) or Hawaiians (15% in 1940, 14% in 1950). 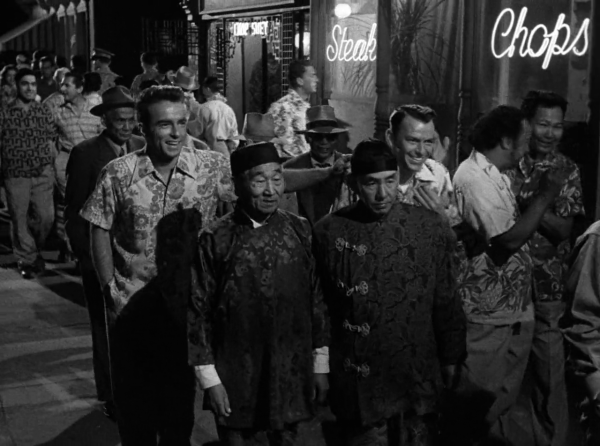 Bowdlerising: Again, I want to save the book for proper commentary later, but even the casual viewer can tell that the New Congress Club, where Prew meets his lover Lorene/Alma, is a brothel that has been cleaned up for Hollywood ("soft drinks", forsooth!!!). In fairness, the extramarital relationship of Warden and Karen is kept (it would be rather difficult to tell the story without it). 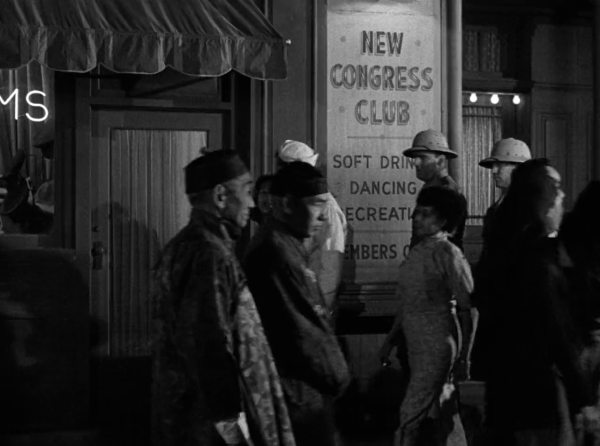 From here on, it's all positive. The music is good, both George Duning's incidental music and the contemporary songs which crop up, which include the memorable "Re-Enlistment Blues":

The use of the buildings and landscape is very impressive, and one wonders how the locals felt about the re-enactment of Pearl Harbour only twelve years after the real thing; most of them would have remembered it well. The most notable use of landscape of course is in the film's most famous single scene (which actually lasts less than a minute): 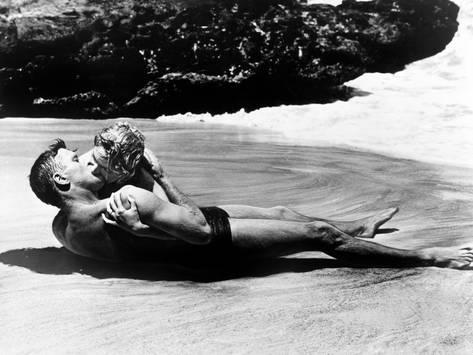 The plot (and again more on this later) has had a lot stripped out of 850 pages of novel to make 118 minutes of film, and therefore loses a lot of the complexity that the book has, but establishes its own structural integrity. This is partly because of the star quality of the leads; where the book concentrates on getting into the heads of the two main characters, Sergeant Warden and Private "Prue" Prewitt, the film also has two strong female leads and a third strong male, which means a rebalancing of the narrative which gives a slightly more balanced gender perspective. 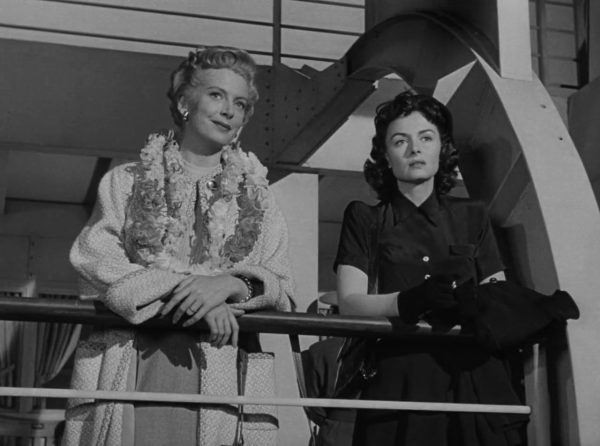 One change that apparently was forced as part of the price of army co-operation was to ensure that the awful Captain Holmes (Philip Ober) should get his come-uppance in the end, rather than get promoted out of the way as happens in the book. 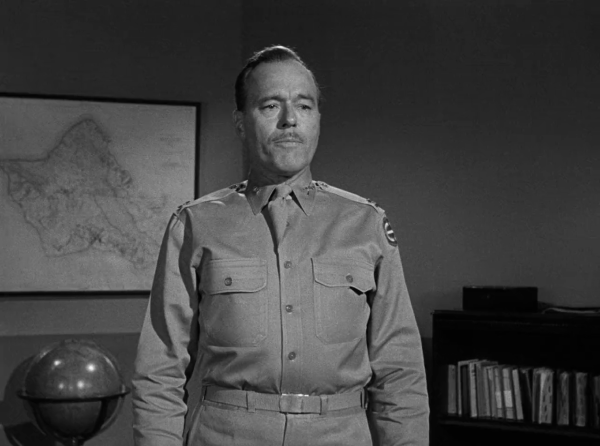 Of the leads, I actually found Montgomery Clift as Prewitt and Donna Reed as his girlfriend Lorene (whose real name is Alma) the least magnetic, though still pretty compelling. Prewitt's character arc is a sadly downward one, as his defiance of the system fails to bring him any reward; and I was a bit mystified that Reed's performance was one of the two that got the Oscar. Clift's bugling (if it is him) does add to the soundscape. 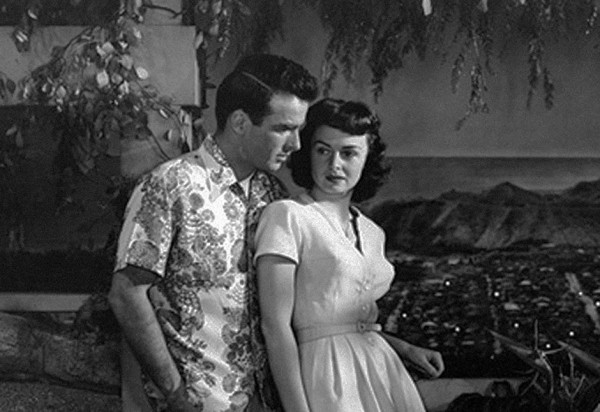 Burt Lancaster and Deborah Kerr as Sergeant Milt Warden and Karen Holmes, the wife of his commanding officer, are gloriously sexy throughout. This is a publicity shot rather than an actual scene, but conveys the atmosphere well: 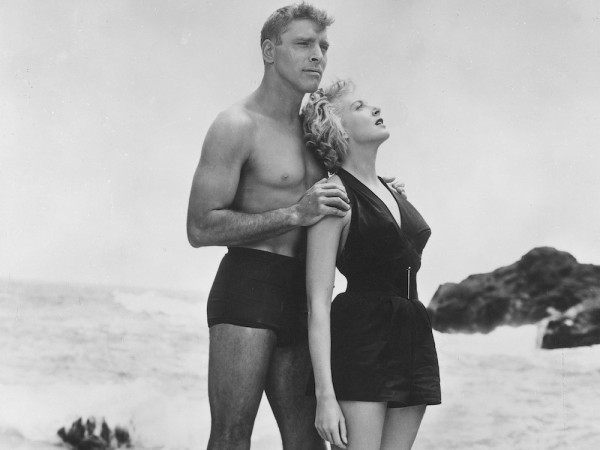 The standout performance, to my total surprise, is Frank Sinatra as Maggio. He's a relatively one-dimensional character in the book, but in the film he's partly a bromance partner for Clift's Prewitt, and mainly the life and soul of the party, who really demonstrates how the military lifestyle fatally curtails his individuality. He hardly even sings in this. (The only other film I'd seen him in is Guys and Dolls.) 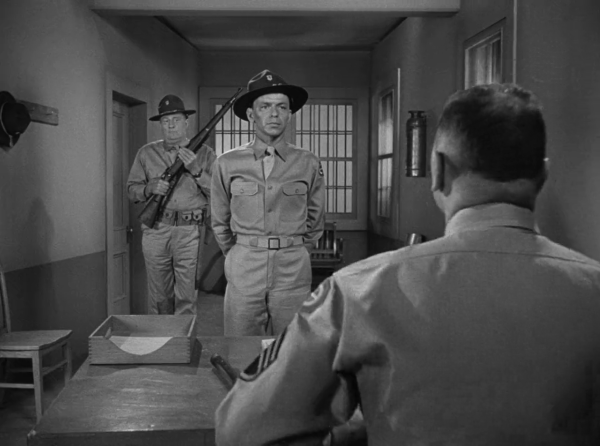 So basically I went into this with no expectations, and was very favourably impressed. You can get it here.

As is my habit, I also read the book on which the film is based. The second paragraph of its third chapter is:

He threw the cigaret in the flat iron pot painted red and black, the Regimental colors, and watched the tail end of the Company move out the truck entrance and out of sight, then stepped down onto the slick concrete of the porch and walked along it to the Supply Room’s open door.

As usual, I liked the book more than the film. I think the only parts that grated were where relatively unsophisticated soldiers engaged in deep conversations about Art and Literature which felt a bit like the author talking to his imaginary friends. As noted above, the character of Maggio is much less well developed and the women get relatively less viewpoint time than in the film. But in general it's a lot more substantial, a lot more frank about sex and complex emotions; several particularly good subplots were cut from the script; the army of Jones' novel may not have any black soldiers, but it does have Jews and Indians, unlike the army in the film; the Hawaii of the novel has a lot more non-white people than the Hawaii of the film. And it's very well written, tensely close to the geography of 1941 Honolulu, to the point that one can follow Prewitt's track from Alma and Georgette's house to the fatal golf course quite readily on the mapping app of your choice. It's a darker story than the film (which is already dark enough); Warden and Karen's relationship is considerably more rocky on the page (there's a grim passage where they sneak away for a romantic break and discover that they can't actually stand each other's company for more than an hour or so) and Prewitt's final disintegration is recounted at length. I think it's a rather old-fashioned book, in that it's really all about the men, but it's pretty gripping all the same. You can get it here.

Next up is On The Waterfront, of which I know very little.