Second paragraph of third chapter:
When I first read this ten years ago, I wrote:

Well, I've done it: finished the final volume of the Penguin set of À la recherche du temps perdu, a year and a half after starting them. Like the previous one, I found the last volume very lucid and involving; I wonder if this is really the case, or just reflects my increasing comfort level with Proust's prose? It's quite a break with the previous volumes in some ways, chronicling the effects of the 1914-18 war on France, on Paris, on the places the narrator loves and on his social circle; then an accidental encounter with a gay brothel; then a fifty-page reflection on memory while the narrator walks upstairs from the courtyard to the Guermantes' party; then further meditations on age, on death, on what has happened in the previous volumes and on what drives the narrator to write it all down and turn it into a book. It is very satisfying, and now I want to go back and read it all again (though I may read the Alain de Botton book first).

I read the six books in six months this time, and to be honest I feel that slightly rushed the job; it would have been a bit better to savour the whole experience. I agree with my earlier self that the last volume is very approachable - we still have endless parties, but the author has grown up and is working through what this means for life, and the closing pages are very reflexive indeed. Given this year's cenetenary commemorations, it's interesting to note how the first world war happens here as a change of background rather than a series of events (the death of Saint-Loup perhaps being the only specific war incident reported).

But now that I'm a bit more familiar with the great modernists than I was ten years ago, I am struck by the extent to which À la recherche du temps perdu is a diversion rather than a foundation for what came after (or at least what I have read of what came after). I'm glad to have read it (twice), but I don't think I'll do this again. You can get this volume here.

Second frame of third section (Gert's new boss is explaining the school philosophy to him): 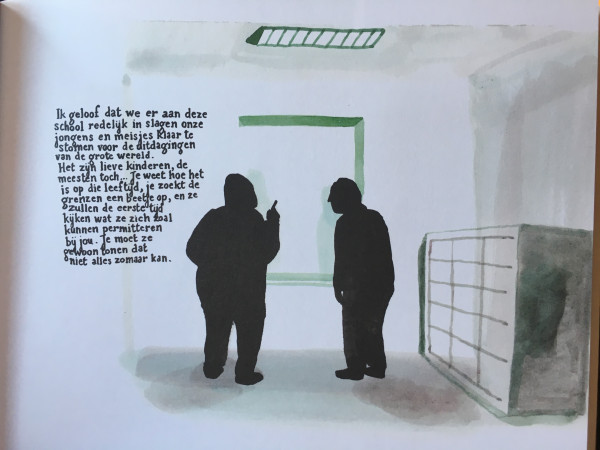 School principal: I believe that in this school we are doing a reasonable job of preparing* the boys and girls for the challenges of the adult world.
They are sweet children, most of them anyway... You know how it is at that age, you're finding out where the boundaries are, and at first they'll try and see what you will let them get away with. You just have to show them that there are limits.
* The verb "klaarstomen" actually implies much more energy than the simple English “to prepare”, suggesting that the preparations are steam-powered. It is mainly used in edcuational contexts, sometimes as an equivalent of "to cram", but that would not have been correct here.

This won the first Willy Vandersteen Prize for the best Dutch-language comic of the previous two years (annual since 2014). It also won a Prix de l'Audace at the Angoulême International Comics Festival, and an Eisner nomination (for Best Painter/Multimedia Artist (interior art), in 2011). I thought it was really good.

It's a story in three parts. First, Gert throws a party in his attic apartment; all his old friends have come in the hope of catching up with Robbie, the most popular chap in the class. Lots of views of stilted conversation through the empty chair where Robbie is not sitting. In the second part, Robbie works his charm on lonely Noemie, who casts her inhibitions aside for some wild sex with him. And thirdly, Gert catches up with Robbie after checking in grayly and anonymously for his new job as a school administrator, and their relationship is laid much more open to us as readers than to them as characters. Robbie's favourite night club, Disco Harem, lurks in the anecdotes told by guests in the first part, and is the setting for most of the second and third parts; it is lushly realised and almost qualifies as a character on its own.

The extraordinarily expressive watercolour art (see here for some sample frames) is what puts this album a cut above the usual Flemish reality comic (which I tend to enjoy anyway). Here are the guests filing up the stairs to Gert's party, for instance: 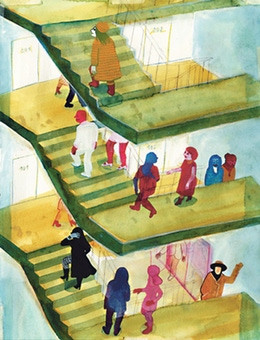 And the graphic story medium, done well as it is here, can catch nuances of characterisation that the printed page cannot (look for instance at the faceless silhouette of the principal as he talks to Gert). I strongly recommend this. You can get it in Dutch here and in English here.

I may try and read the other Vandersteen Prize winners. Amoras vol 5: Wiske is on my list anyway as I have been working through that series. Unfortunately the 2011 winner, Terug naar Johan, by Michiel van de Pol, seems to be out of print.