The Greatest Show on Earth won the Oscars for Best Motion Picture and Best Story of 1952, and was nominated in three other categories, Best Costume Design, Best Director, and Best Film Editing. This is a rather low tally; in particular, I'm struck that none of the cast was nominated in the acting categories. (Though in fairness the same is true of last year's An American in Paris, and also for Grand Hotel, All Quiet on the Western Front and Wings back in the early days.) The other contenders for Best Motion Picture were High Noon, Ivanhoe, Moulin Rouge and The Quiet Man.

IMDB ranks The Greatest Show on Earth 8th (popularity) and 9th (number of rankings) for the year. At the top of both leagues is the only other film from 1952 that I have seen, Singin' in the Rain, one of my personal favorite films, which got a princely two Oscar nominations. (Best Score, and Best Supporting Actress for Jean Hagen as Lina Lamont. It didn't win either of them.) Others that I have not seen and are ranked ahead of The Greatest Show on Earth on both systems are High Noon, The Quiet Man and Ikiru. Here's a contemporary trailer:

I came into this a bit uneducated; I have seen none of Cecil B. De Mille's other films - not The Ten Commandments, not Sunset Boulevard - and on top of that, watching on a small screen means that you lose out very much on the experience that first time viewers would have had. This was part of the reason it left me somewhat cold, and it's going near the end of my table - ahead of Mutiny on the Bounty, because it's more spectacular to look at, but behind Gone With the Wind because of lack of plot and decent acting.

Whitewashing: I know this may be getting tedious of me, but it's now nine years since we had an Oscar-winning film with a speaking part for a black actor. Literally the only black people visible in two and a half hours are those putting up the Big Top 53 minutes in. Otherwise it's an all-white affair. Several of the circus acts are based on non-European cultures, but performed entirely by white performers. 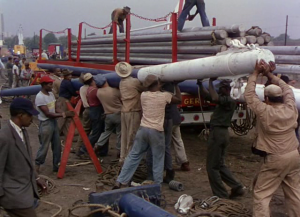 Plot: The film juggles (see what I did there?) two quite different core themes - the spectacle of the circus, and a romantic triangle between the three lead characters (with a couple of wrinkles, one of which is rather good). This means intrusive voiceovers at the beginning, the end and various points in the middle explaining to us why the animal cruelty and cultural appropriation we are seeing is so important, interspersed with heaving bosoms and glowering glances between the main protagonists. It's really all laid on pretty thickly; no subtlety here. I have to admit I sometimes sympathised with the little girl in this frame: 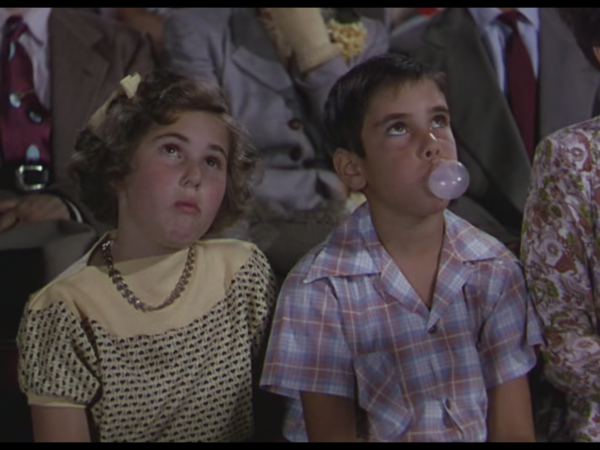 The leads: I've mentioned this already. I found the three main characters melodramatically written and unimaginatively acted. The worst of the three is Charlton Heston as circus manager Brad, who glowers and smoulders in every scene; it's not at all obvious why he and Holly are attracted to each other. Just as one-note, but a bit less annoying, is Cornel Wilde's sexy trapeze artist Sebastian, who does play a convincing charmer of women. Apparently Wilde was terrified of heights, so it's just as well that his character gets injured and has to take time off from performance - though he seems game enough. The most annoying of the three in terms of acting is Betty Hutton as Holly; every line is delivered with much drama and sighing. However I'm cutting her some slack because she does some genuinely impressive acrobatics, rather more than Wilde, which must have been a real strain. 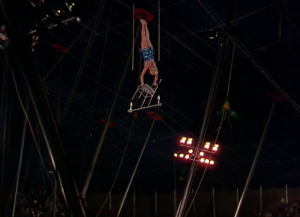 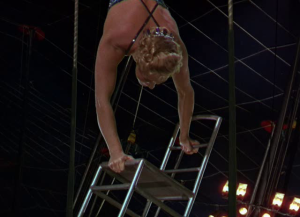 Gender: Comes out rather better than you might have thought (though not helped much by Hutton’s performance). A consistent theme is women asserting their rights to make their own choices, including Hutton’s character’s choice between the two men she is attracted to. The costumes are spectacular rather than salacious. 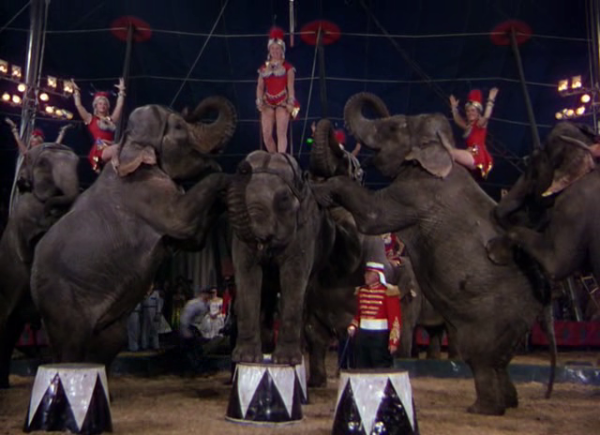 The supporting cast: Having grumbled about the leads a lot, I will say that the next rank are much much better. The standout here, possibly the best part in the film, is James Stewart (who we saw 14 years ago in You Can't Take it With You) as Buttons, a clown who turns out to have a tragic secret in his past, which is why he never takes off his make-up. His sidekick in the film, Emmett Kelly, is playing himself as one of the main performers of the Ringling Bros and Barnum & Bailey Circus. (Buttons' nemesis, FBI Agent Gregory, is played by Henry Wilcoxson who we saw ten years ago as the vicar in Mrs Miniver.) 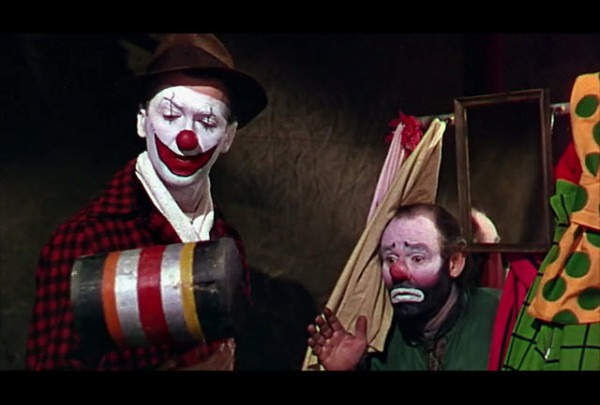 Gloria Grahame as circus performer Angel also stands out, and gets most of the best lines in the film, culminating with "Listen, sugar, the only way that you can keep me warm is to wrap me up in a marriage license." (Lyle Bettger, as her jealous boyfriend Klaus, not so much.) 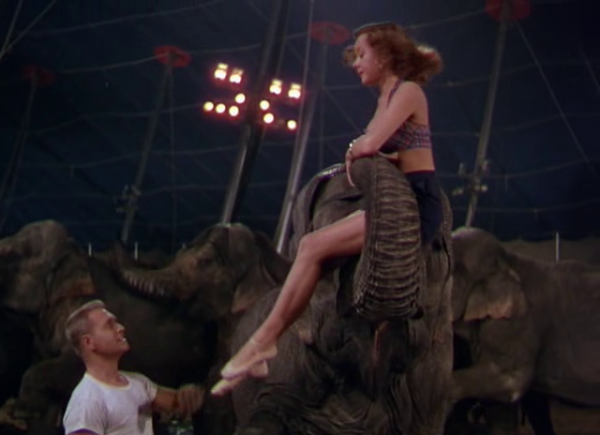 Music: Lots of decent enough songs, not too taxing and featuring of course the title piece. (Some dubbing, particularly where Betty Hutton is apparently both acrobatting and singing at the same time.) There is a great cameo moment when Dorothy Larmour, playing Phyllis (another solid supporting role) is performing in the big top, and in the audience we see her co-stars from the "The Road To..." films, Bob Hope and Bing Crosby, eating popcorn. 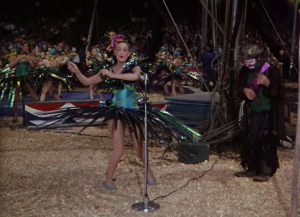 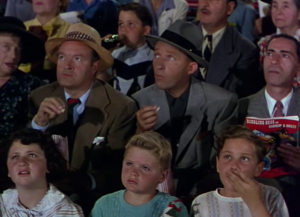 Cinematography: Even a grinch like me has to admit that the actual circus scenes are filmed very well, and must have looked really really good on the big screen. Apparently the film as a whole was tremendously well received back in 1952 and its winning the Oscar came as little surprise. There is, I must admit, a truly spectacular scene near the end when the circus train actually crashes. 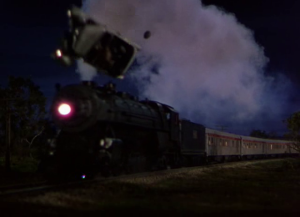 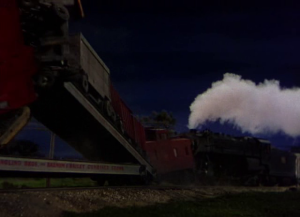 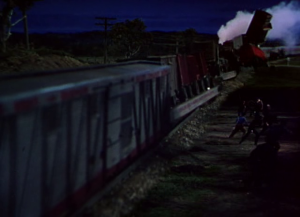 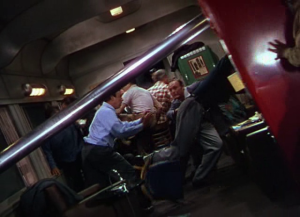 This was not one of my favourites, and the fact that it did so well, and Singin' in the Rain got nowhere, does not dispose me kindly to that year's Academy voters.

Next up is From Here To Eternity, which I will possibly combine with the Retro-Hugo winning George Pal War of the Worlds. I'm twenty-five Oscar-winning films into this project now; at this rate (which I may not necessarily sustain) I'll be up to the present day by the end of 2021.

Second last of these for the year

Last books finished
The Name of This Book Is Secret, by Pseudonymous Bosch
A Cold Day in Hell, ed. Tom Spilsbury