For the last few years I've done a round-up of my my year on social media. This year I'm starting with the more traditional media pieces to which I contributed or in which I was mentioned, grouped by theme rather than in date order.

As usual, I got a lot of coverage on Northern Ireland issues — three small themes and one big.

A BBC interview in the summer, marking the moment that Northern Ireland overtook Belgium's record for the longest period of time without a government, got me another bite of the cherry in the Belfast Telegraph.

I wrote a piece for Slugger O'Toole in January on the forthcoming West Tyrone by-election, and got quoted in the News Letter on the result.

And the Guardian quoted me in a piece about the DUP in the context of Brexit.

The big topic for me was the obscure question of the proposed new parliamentary boundaries, which were leaked in January to much excitement, and finalised in September; I wrote a long analysis for Slugger O'Toole, summarised it for the BBC, and was quoted in the Belfast Telegraph and the News Letter.

And the BBC also reported that when the Queen's University of Belfast Students Union was being cleared out prior to its demolition, they found an old photograph of me.

For the second year running, I found myself on the top 40 #EUinfluencer list. Very flattering.

I wrote for Euractiv and was interviewed by CNN on next year's European Parliament elections.

I Tweeted and Facebooked a lot about Brexit, and contributed a column (dubbed "Whyte Noise") to APCO's monthly Brexit Bites bulletin, ending the year with this gloomy take from last week.

On other parts of Europe, I did this short analysis of the Hungarian elections; and I visited Helsinki in November to campaign for former Finnish Prime Minister Alexander Stubb at the European People's Party congress; Helsingin Sanomat ran this as a story. (Must have been a slow news day.) One of my tweets about Helsinki made it to EurActiv's Tweets of the Week.

In July I participated in two panel discussions on CGTN about Chinese policy and its perception in Europe. Only one of them is online:

Finally, I did an interview with Croatian TV where there was a bit of a glitch with the spelling of my name. People get "Whyte" wrong all the time, but this was special. 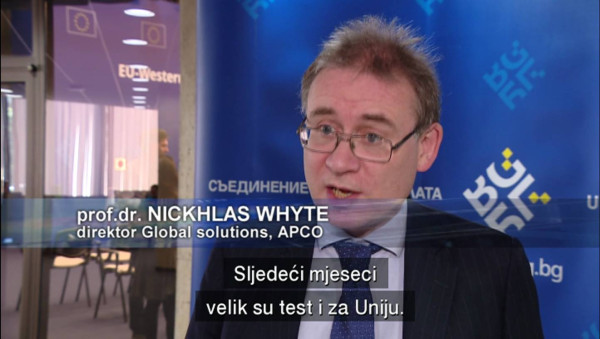