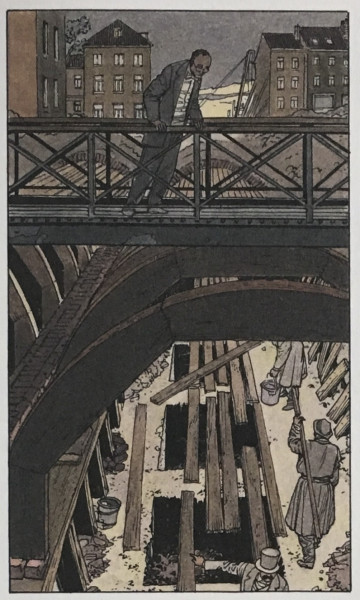 There is actually a comics shop in downtown Brussels named after this volume, and I had assumed for some reason that it was originally in Dutch and a standalone tale. In fact it was originally in French (but I read the Dutch translation) and it's the fifth (at least; counts vary) in a series of works with the overall title Les Cités obscures, which sort-of translates to "The Obscure Cities", set in a succession of parallel conurbations which are closely related to those on our own world. There's no doubt whatsoever as to which city Brüsel refers to, particularly since my edition is prefaced with an angry and well-illustrated essay about how urban development has destroyed communities and heritage in the real Brussels. This frame is a particularly chilling reinterpretation of the Palais de Justice (uncompleted here; apparently the original plan was to put a pyramid rather than a dome on top): 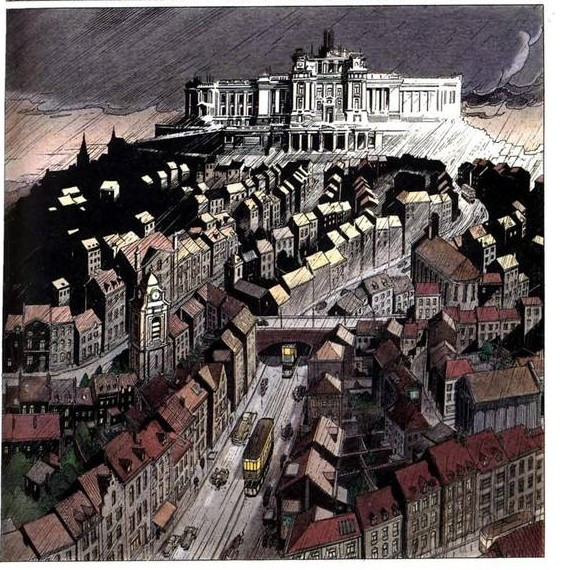 It's a book of polemic rather than plot. Our hero, Constant Abeels, is a florist who has switched from real flowers to plastic ones. He gets drawn into the steampunkish world of the urban developers of Brüsel, led by the sinister Mr De Vrouw (whose name means Mr Woman); at the same time he is subjected to medical treatment for a condition similar to but not entirely like tuberculosis; and keeps encountering the enigmatic Tina Tonero, whose clothes have a tendency to fall off at strategic moments.

I found this sufficiently intriguing that I will try and find the rest of the series, starting from the beginning, in the original French. I would recommend getting this in French too, here.

My only other unread non-English comic (at present) is Lambik, by Charel Cambré and Marc Legendre.