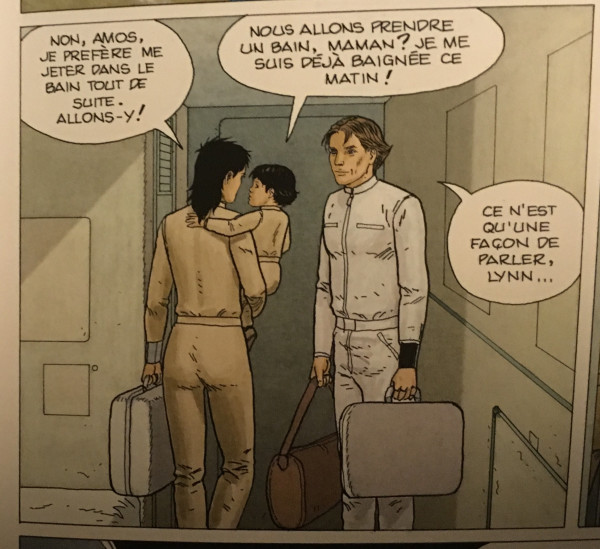 Kim: No, Amos, I’d prefer to jump right in [in French, “to jump right into the bath”]. Come on!
Lynn: Are we having a bath, Mum? I bathed this morning!
Amos: It’s just an expression, Lynn...

I was delighted to discover that Leo has started a new story cycle in Les Mondes d’Aldébaran, the comics series which has been going for two decades. The French don’t do things by halves; here’s the official trailer.

The storyline is that Kim, heroine of the previous series, has returned home to become the key interlocutor between the humans of Aldebaran and the alien Tsalterians (one of whom is father to her child Lynn); and has also become a celebrity, dealing with some very unwelcome attention. The Tsalterians invite her to help them assess a peculiar huge hovering cube, which turns out to be a portal to yet more lushly forested worlds, where both human and inhuman dangers await. (And there’s a bit of freshness to the lush forests, because Leo has handed over the colours to Florence Spitéri rather than do it himself.) Meanwhile Kim has two new allies, an Earth couple who are trapped in perpetual youth. All good stuff and set-up for another few albums. You can get it here.

This was my top unread non-English comic. The only one I have left now is Lambik, by Marc Legendre. Time to stock up, particularly perhaps on Survivants, the Aldebaran series I haven’t read yet.