Today is our 25th wedding anniversary!

We celebrated last weekend by going to Riga. 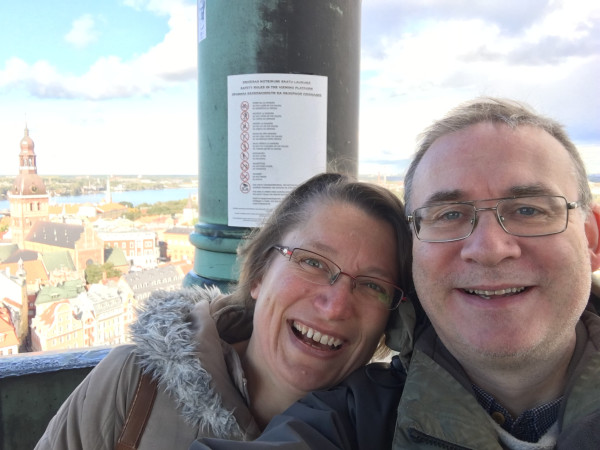 I think Latvia was the EU country about which I knew least before we went there. Riga is a pretty city on the Baltic, with some lovely old architecture dating from the time when it was the biggest city in the Swedish empire. 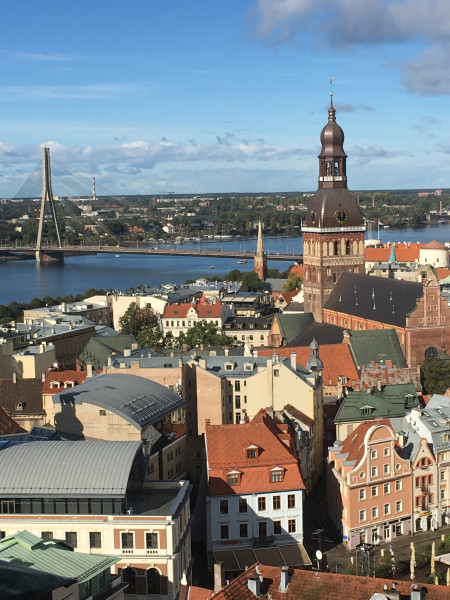 The opera house, where Wagner worked and where the Flying Dutchman was on. We didn't go inside. 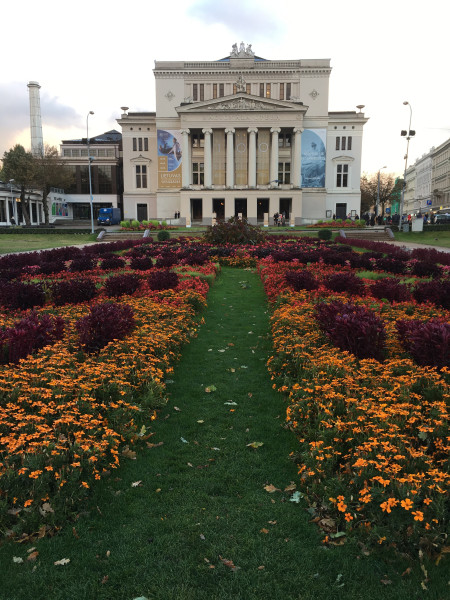 The cityscape views were taken from the impressive spire of St Peter's Church: Inside, there is a spacious nave and also art in the aisles. 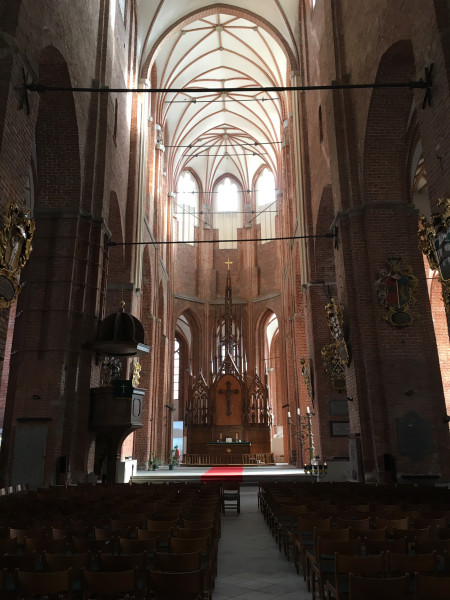 This includes a rather impressive Resurrection of Christ by Imants Lancmanis: 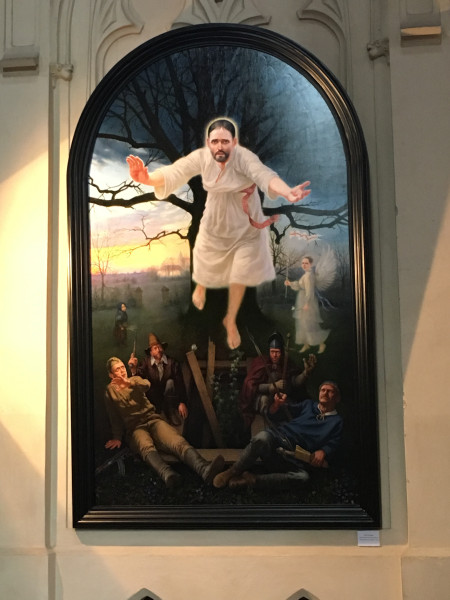 The other big church in Riga is the Cathedral, which has some gorgeous baroque twiddly bits (organ and pulpit) and a twelfth-century font (lower left). The unspectacular outside masks some lovely cloisters. 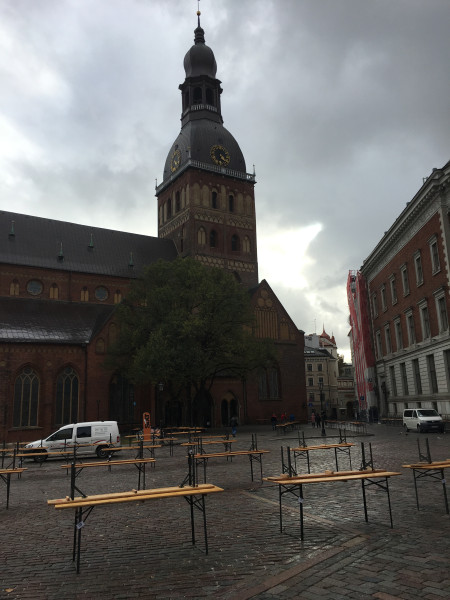 We didn't make it across the river to the National Library, where in fact there was a conference on where I knew several of the attendees. The grand covered market was orignally constructed as Zeppelin hangars. Looks impressive from the outside: Saturday happened to be the day of the annual Michaelmas market outside the cathedral: cue lots of amusingly shaped vegetable displays. And a choir of little girls singing. It was raining miserably but these honey-sellers were gamely sticking to their festive headgear. Latvia has parliamentary elections this coming Saturday; there were posters up everywhere for the different parties, and we spotted this campaigning stall. They offered us literature but we said we were tourists. The Latvian language is Indo-European, and closely related to Lithuanian. From the warning poster in St Peter's Church, I checked the origin of the word "bērns", meaning child, and it is indeed related to the Scots word "bairn". Most public signage is just in Latvian, but English and Russian are also used. It was not always thus - for centuries, the German-speaking community was dominant. A plaque in St Peter's Church commemorates two visits from Kings of Sweden in different centuries and different languages. There are a number of historical and art museums in Riga; we went only to the National History Museum, which had a very interesting display about Latvia's century since its first declaration of independence, representing a lot of the conflicting narratives about the early years, the Ulmanis dictatorship, and the Soviet regime including also the Nazi occupation. We learned a lot, but the only picture I thought to take was this poster for the first ever Latvian feature film, "I'm Leaving for the War" (1920): As always, there is lots of public art. This head is on display in the cathedral cloisters, but is reckoned to be pre-Christian (which is rather later in Latvia than in other parts of Europe). It inspired this imitation in a nearby square. This is a memorial to the Riga-born photographer Philippe Halsmann, who famously got his subjects (including Richard Nixon and the Duke and Duchess of Windsor) to jump. This is a memorial to the barricades of 1991. The most iconic structure in Riga is the Latvian Freedom Monument, which I photographed against a tremendously stormy sky. The inscription at the bottom is Tēvzemei un Brīvībai, For Fatherland and Freedom. Little did we know that as we enjoyed ourselves in Latvia, the UK's Foreign Secretary, Jeremy Hunt, was about to make himself look really stupid by comparing the European Union to the Soviet Union. In Latvia, they can tell the difference, as the Latvian ambassador to the UK pointed out. 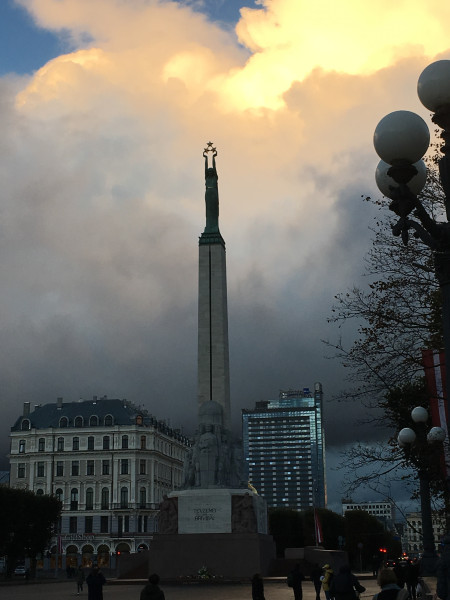 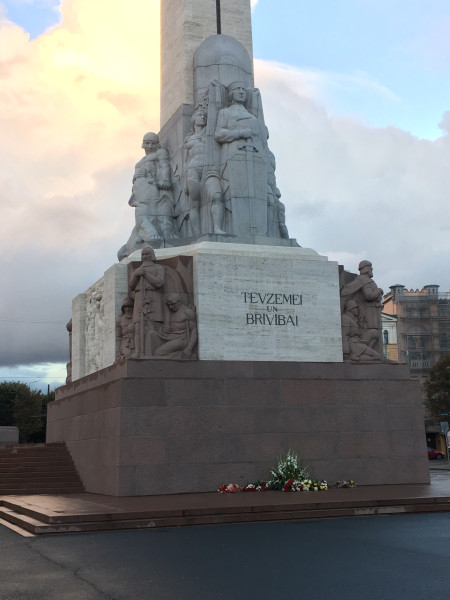 Quick notes on where we stayed and ate.
Accommodation: Pullman Riga Old Town, Jēkaba iela 24, very comfortable, should have brought swimming costumes to enjoy the pool.
Friday tea: Golden Coffee, Kungu iela 7/9, beside St Peter's Church, standard Russian/western bistro, friendly service
Friday dinner: Zviedru Vārti, Aldaru iela 11, right next to the Swedish gate which gives it its name, good traditional fare.
Saturday lunch: We tried the Vertigo Bar, but it doesn't actually do food, and ended up in the sumptuous restaurant of the Metropole Hotel, Aspazijas Bulvaris 36/38.
Saturday dinner: Milda, Kungu iela 8, a bit further along from Golden Coffee, lovely traditional food.
Sunday morning: went looking for Cafe Osiris, recommended in the Guardian, but could not find it. Went back to Golden Coffee in the end.
Sunday lunch: Alaverdi, Grēcinieku iela 8, Georgian food which to be honest was a bit too heavy after the weekend we had had.

We also went to a concert in the VEF Concert Hall, featuring a Latvian choir and whirling dervishes. To be honest it was not all that exciting. But given Latvia's history, sometimes not being all that exciting is a good thing.

Not sure if I would rush back for tourism - two days is probably enough for Riga - but it was great to celebrate our 25 years of marriage, and we had a very good time over the whole weekend.
Collapse